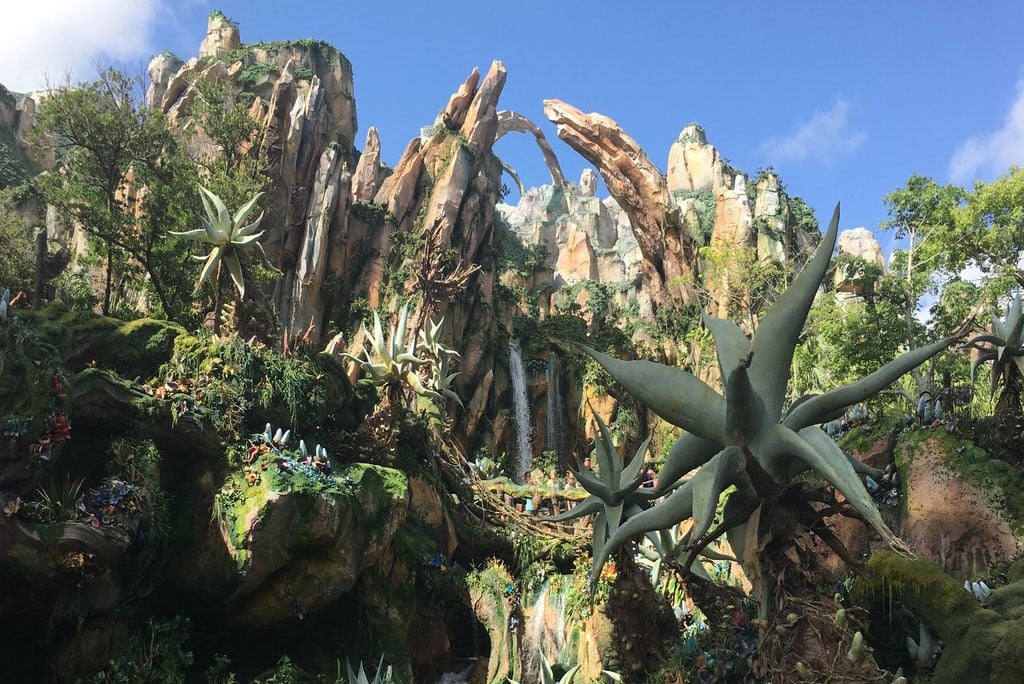 I recently got home from a trip to Disney World, and like always, experienced the usual “Disney blues.” This time, however, I wasn’t just missing the general feeling of being in Disney World. I was missing one attraction, and one attraction only – Flight of Passage.

Avatar Flight of Passage is a brand-new ride in Disney’s Animal Kingdom, within the newest land – Pandora: The World of Avatar. The new land features two attractions (the other attraction, Na’vi River Journey, is a serene but short boat ride), dining, and shopping. The whole land is centered around the movie Avatar, directed by James Cameron, which came out in 2009.

Like many others, I was skeptical when Disney announced they were adding an Avatar-themed land to Animal Kingdom. I was working there at the time, and Animal Kingdom was already starting to feel like home. Though Camp Minnie-Mickey wasn’t the most exciting land in the park, I wasn’t sure how I felt by it being replaced. The movie Avatar was already a few years old at that point, and while I could kind of see how the “Pocahontas in space” theme fit the message of the park, I still was on the fence about how successful this was going to be.

Then Pandora opened, and a few months later, I visited for the first time. And man, I have never been so happy to be wrong. Pandora blew away all my expectations, but it was Flight of Passage that made me fall in love with Disney (and theme park attractions) all over again.

Now, I know calling this brand-new ride the best Disney attraction ever is a bold statement. After all, Steve Porter recently wrote an article about how the Peoplemover is the greatest Disney attraction, and while I love the Peoplemover (and Steve’s articles), I must respectfully disagree. His article was even discussed on a recent episode of the Dis Unplugged podcast, which inspired me to write my thoughts on this attraction, and I hope you’ll hear me out! I wanted to make sure I wrote this article as objectively as possible. I’ve ridden Flight of Passage multiple times now, and am past the initial honeymoon phase of experiencing a Disney attraction for the first time. I’ve gotten to know the attraction a little more, and I want to share why I love it so much with other readers.

But first, what is Flight of Passage exactly?

It’s easy to call Flight of Passage a motion simulator. That’s basically what it is, and yet it feels like so much more. If you’ve ever been on Soarin’ over at Epcot, it’s like that, but a million times more immersive. In Flight of Passage, you sit on a bike facing a large screen, yet unlike Soarin’, you are already seated on an elevated platform.

You wear 3D goggles, and the seat does move to match the motion on the screen, but other than that you never leave the ground. And yet…it feels real. When I’m on that ride, and I’m smelling those amazing scents, and I’m getting sprayed with mist, I really feel as if I’m riding on the back of a mythical banshee.

This is the most well-done simulator I’ve ever been on, and the ride itself is only a portion of the immersive experience. The thrills begin as soon as you enter the queue. All Disney rides start with a good story. Whether you’re entering a spooky hotel on the dark side of Hollywood, or sailing through the Caribbean along with pillaging, plundering pirates, every Disney attraction seeks to instantly transport you away from reality. In my opinion, Flight of Passage is no different.

Luckily (or unluckily, depending on how you look at it), this attraction still has a constant two-hour or longer wait, so you have plenty of time to examine the details and story that the queue presents. Imagineers built this ride anticipating waits of up to six hours, so they definitely did their best to make the queue incredibly detailed.

Guests enter the queue through winding trails of flora and fauna, both natural to Earth and native to Pandora. The trail leads to a cave, where paintings on the wall display how the Na’vi have been riding on the backs of Ikran, or “banshees,” for centuries. (The easiest thing to compare a banshee to is a dragon, minus the fire-breathing.) You then enter a research facility and this, to me, is where the fun begins.

ACE (Alpha Centuari Expeditions) is the fictional research company that has set up camp in the Valley of Mo’ara on Pandora. They are here years after the events of the 2009 movie have taken place, and seek to study the environment of Pandora in a safe way. (Unlike in the film, where soldiers came to Pandora and damaged the environment.) They are also here to study creatures on Pandora, and the only way they (and you) can get close to the banshees is by linking your DNA to an avatar.

As you make your way further through the queue, it really does feel as though you are in a military research base. You walk through an indoor bioluminescent forest, where the ACE researchers have been studying plant samples and the effects they have on detoxifying the air. Then you enter the lab, where you can see that different experiments on Pandoran creatures are being conducted; signs on the wall describe banshees as keystone species, and why it is important to protect them. (This part of the queue really helps to connect Pandora to the overall theme of Animal Kingdom.)

Right before you enter the loading docks that will lead you to your “linking chamber,” you see an actual avatar floating in a water-filled tube. It is the most lifelike Audio-Animatronic I have ever seen, and I still haven’t figured out how they got it to move in water like that.

Soon, you enter the first of two pre-show rooms, where a scientist on Pandora explains via video screen a little more about how they link you to an avatar, and the important rite of passage that is flying on an ikran for the first time. Each guest stands on a number and gets linked to their own avatar, which can physically be miles away. By linking to an avatar, you’ll get to experience the flight of a banshee, just as if you were really there (and, uh, fly)!

I know all of this, because the pre-show video is long. It seems unnaturally long, even though it does a good job of explaining the concept of the ride to guests (and distracts you from the fact that you’re still waiting). The scientist in the video also doesn’t inspire a lot of confidence in me; I would rather have Dr. Seeker from Dinosaur as my banshee flight trainer. I mean, sure, the dude sent us to the middle of an asteroid strike, but at least he sounded like he knew what he was doing.

After going through basic banshee training, you enter the second pre-show room, where you get your 3D glasses and watch another video. A character named Dr. Jackie Ogden clarifies that you will be led on your flight by a Na’vi guide, and that you might face some of Pandora’s greatest challenges (wink, wink). After a short tutorial explaining how to stow your gear and board the ride vehicles, it’s time for your flight! It’s hard to write about the actual ride experience for a couple of reasons. One, because I don’t want to spoil the attraction for anyone who hasn’t ridden it yet, and two, because words just don’t do it justice.

Once you board the vehicle, stow your gear, and put on your flight goggles, the anticipation starts. The room smells amazing, the lights dim, and you’re left with a feeling of breathless giddiness. The seats sway in perfect synchronicity to the movements on the film, and though it sounds cheesy, it does feel like you’re actually in Pandora. You can even feel the banshee breathing as you soar through the sky and dip beneath the trees.

I can understand how some people prone to motion sickness might have trouble with this attraction. For me, however, it’s very smooth, and it even makes me a little emotional. I don’t get mushy over anything, but this ride makes me tear up (though I usually blame it on the cold wind blowing in my face). The beautiful music from the film compared with the stunning visuals on screen just takes my breath away. I think my husband described it best when he said that the ride “makes you feel like your problems in life are so small.”

This ride is an escape from reality in the best way possible, and if someone told me I was, in fact, transported to Pandora for a few minutes, I would believe them. You don’t have to have seen the film to enjoy the attraction; the ride does a perfect job of introducing you to the world of Avatar.

For me, a Disney attraction has a memorable story, educates you while entertaining you (edutainment), and immerses you into a different world. Flight of Passage, in my opinion, checks off all of these boxes. Heck, it even has an Audio-Animatronic in the queue. It may not be a classic, like Haunted Mansion or “it’s a small world,” but Flight of Passage has a charm all its own.

I love pretty much every Disney ride there is (well, aside from the Tomorrowland Speedway), however, Flight of Passage has changed the game when it comes to theme park attractions. It is technologically innovative, which I believe Walt Disney would have been a fan of: it was him, after all, who told us to “keep moving forward.”

I want to keep being impressed by Disney, and I’m sure when the next shiny new attraction opens, I’ll be impressed with that one as well. However, right now, Flight of Passage manages to be a state of the art attraction with a strong story and emotional heart. This is what keeps the lines long, the FastPasses rare, and people like me gushing about the attraction for years to come.

So, until the next time I get to ride – Sivako! (“Rise to the Challenge.”)

What do you consider the best Disney attraction?