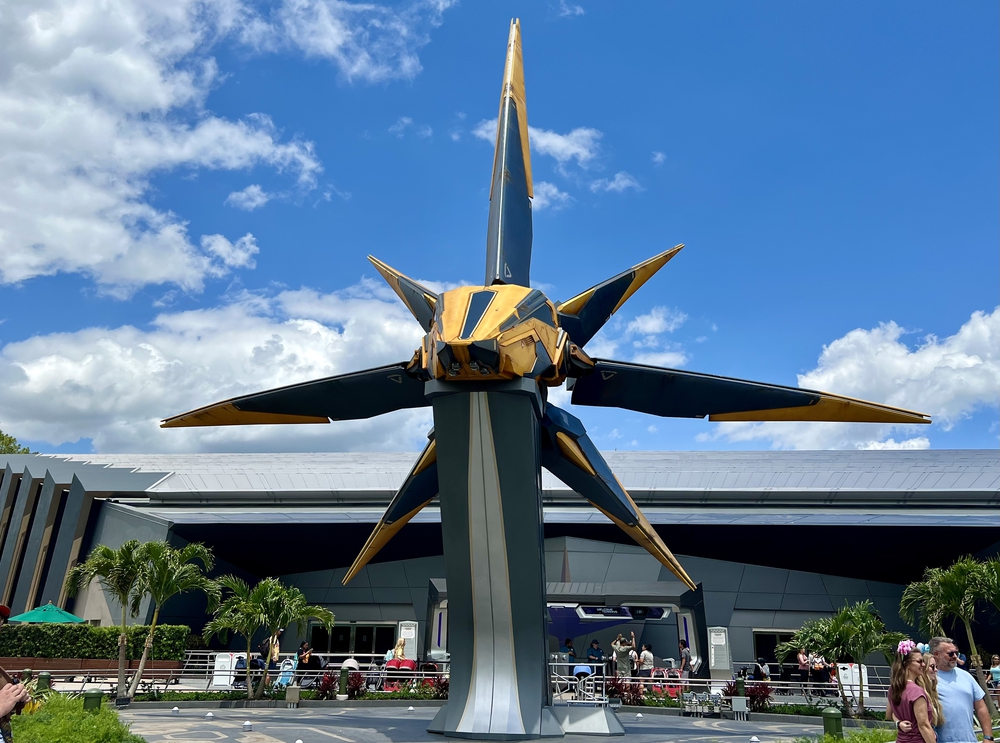 It won’t be long now before you and I are zooming and zipping our way through an officially open Guardians of the Galaxy: Cosmic Rewind. The attraction opens on May 27th, and if you’re hoping to grab a boarding group or purchase an Individual Lightning Lane for the new ride on your next visit to EPCOT, I have a few tips to share. And if you’re trying to avoid spoilers, don’t worry. I ducked and covered while the spoilers were flying before my first Annual Passholder preview ride, so I’ll hold the spoilers for now.

So, yeah…this seems to be the biggest thing on everyone’s mind before they ride GOTG: Cosmic Rewind. The fateful “Am I gonna get sick?” question looms large over this attraction, and for good reason. You’ll see custodial cast members here and there in the ride building, and yep, if they’ve got a spray bottle in hand, they’re doing exactly what you think they’re doing. Guests are getting sick on the ride, and those with easily upset tummies would be wise to take a couple of measures.

First of all, Dramamine is your friend. Whatever you typically take when you find yourself in situations that might make you motion sick, take it. The attraction vehicle moves you to look in certain directions at certain times all while moving quickly along a track. If you’re sensitive to such things, take measures ahead of time. The vehicle doesn’t spin like a Mad Tea Party teacup does, rather, it turns to direct your attention toward a certain area. Which brings me to my next piece of advice.

Actually, my hubby is more sensitive to motion than I am, so this next nugget is more his than mine: only look forward. Look where the Imagineers who designed the attraction want you to look, and you’ll be less affected by all of the movement. It’s when you start craning to see all the things around and behind you that motion sensitive peeps might have a problem.

One last piece of advice: sit toward the middle of the train of vehicles. Ryno was the first to point this out, and he’s 100% right. I’ve had the great fortune of riding Cosmic Rewind three times so far, and I rode in the front car (row 2) my first time. I am a thrill junkie; I’ll ride just about anything, and even I stepped off of the ride that first time and felt just a tad whiffy. Not horribly so, but just a bit. My second preview ride was in row 4 (second car), and everything was fine without a hint of feeling off. My third ride was in row 6, and my hubby remarked about the increased smoothness of that row. He’s right, and while I can’t guarantee that the cast members grouping guests on the ride will be able to accommodate specific row requests, it might be worth a shot to ask.

#2 Bring an umbrella. And a snack.

Cosmic Rewind’s indoor queue holds about 30 minutes worth of people. While we shouldn’t have too much of a back up once the attraction opens and utilizes its boarding groups and Lightning Lanes, the previews have seen people waiting for the ride for up to an hour, with much of that wait being outside in the sun. Thankfully, diamond-shaped umbrellas have now been added to the outdoor portion of the queue, but I was so glad that I had brought along my rain umbrella just in case. If you’ve got an umbrella, you’ve got shade, right? I was also happy that I had brought a water bottle and little snack with me as well. Waiting in the hot sun without water or food increases the chance of a queasy tummy, and I wanted the chance to enjoy the ride to its fullest.

Even the most established of Walt Disney World attractions has its off days filled with downtimes. Add to it that this one’s brand-spanking new and that people are getting ill on it, and three strikes, you’re out. In the three times that I’ve ridden the attraction, I’ve had to wait through extended downtimes, had the queue dumped after waiting for roughly an hour because the attraction just wouldn’t behave, and also had an incredibly long wait time during which we received no updates. We just waited and waited until finally (hallelujah!) the line began to move again.

Moments like this are guaranteed to happen, and even though cast members are doing all they can to keep things swimming right along, sometimes there’s just nothing to do but grin and bear it. My advice is to hit the bathroom before you get in line, and bring along that water bottle that I suggested in tip #2 for a sip here and there. Also, the moments at which downtimes occur might leave you in a space with a bunch of other guests, so bring a face mask if that’s something that will help you better navigate that moment. Also, these are times when your phone can be your best friend (flipping through social can make any downtime go by faster, right?), so consider swapping out your FuelRod for a fresh one before getting in line. Keep your eyes on the prize; in no time you’ll be enjoying an adventure with the Guardians and the frustration of any downtime that you may have experienced will fade in the rearview mirror.

#4 This attraction is AWESOME. Have fun.

Listen, my favorite attraction in Disney California Adventure is Guardians of the Galaxy: Mission Breakout. I love this group of hapless friends. Sooo much. Do you have to love Peter Quill et al, Marvel Comics, Kevin Feige, the people of Xandar, or the Marvel Cinematic Universe to enjoy this attraction? Nope. Not at all. Just sit back, listen to the story being set up for you, and savor every minute. It’s a fun and exciting ride, and it’s shot to the top of my list of favorite Disney attractions. It’s just that good.

There are other pieces of advice that I might give you in the future, but they involve spoilers, so I’ll wait to share those. For now. 😉

If you’ve had the chance to preview Guardians of the Galaxy: Cosmic Rewind and you have a spoiler-free nugget of advice that you’d like to share, please do so in the comments section below. Thanks!