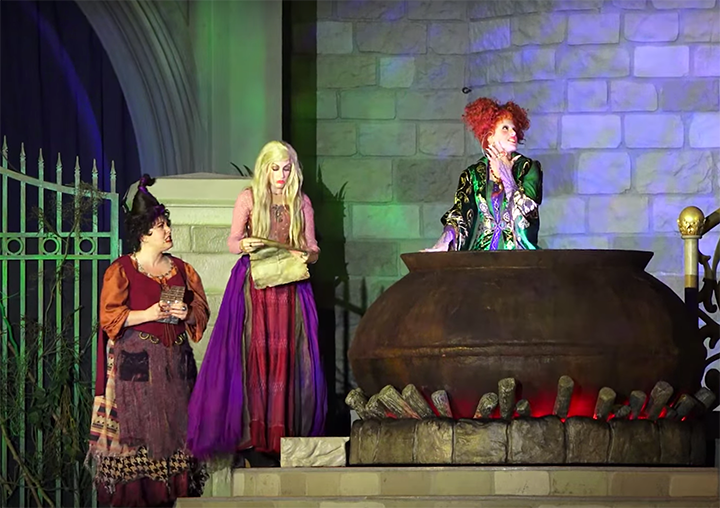 The Sanderson Sisters are back! That’s right the extremely popular performance is yet again one of the highlights of Mickey’s Not-So-Scary Halloween Party. The Hocus Pocus Villian Spelltacular has performances at 8:15 PM, 10:45 PM, and 12:00 AM.

Due to the show’s popularity, the HUB of the Magic Kingdom was very crowded, but when the dancers entered the stage the crowd went wild. The actual show was very similar to years past. The Sanderson Sisters come to the stage to concoct the Hocus Pocus Party Potion with the help of Disney villains like Maleficent, Oogie Boogie, Dr. Facilier, The Evil Queen, Captain Hook, Cruella de Vil, and Hades! Winifred Sanderson concludes the show the same way she has in years past with “I Put A Spell On You.”

Unfortunately, for the opening night of the party this year, Winifred Sanderson wasn’t as strong of a singer as she has been in years past. Maybe it can be chalked up to it just a bad night for that performer. Additionally, the crowds do make waiting for the show and leaving the show very stressful. I highly recommend not watching the first show of the night because it is so crowded it isn’t an enjoyable experience.

The Hocus Pocus Villian Spelltacular has been my favorite and many guests’ favorite part of Mickey’s Not-So-Scary Halloween Party, and this year was no exception, even though Winifred Sanderson wasn’t as strong of a performer.

In year’s past in reviewing Mickey’s Not-So-Scary Halloween Party I’ve stated that Mickey’s “Boo-to-You” Halloween Parade is overrated. Some people love this parade, and I understand the appeal, but year in and year out I am always hoping they do something new and different, but it seems to always be the same thing.

Before the parade, Nick Wilde from Zootopia was dancing in a conga line on Main Street U.S.A. with guests as they waited for the parade to get there. Keeping the energy up did help keep guests happy as they were sitting in the misting rain. The light mist prevented the classic trot of the Headless Horsemen from happening, which was unfortunate. Yet, the ghoulish dancers, classic Disney characters, and the iconic Boo-to-You music do make this parade a must see. Even though it isn’t my personal favorite.

Earlier this year, the Happily Ever After Fireworks display premiered in the Magic Kingdom. Some were concerned that the update to the nightly fireworks would overshadow the Happy HalloWishes Fireworks.

I’m happy to report that, that was not the case. The Happy HalloWishes Fireworks were as spectacular as ever! The fireworks dazzle as they combine the singing of iconic Disney villains like Oogie Boogie and Ursula with the amazing fireworks! This show still stands on its own and is still one of my favorite highlights of the party. The best part of the HalloWishes Fireworks has got to be the 180-degree fireworks. It is almost overwhelming in the best way possible when all of those fireworks explode at once! Guests joined Mike Wazowski, Sulley, and Boo at the Rockettower Plaza Stage in Tomorrowland for a Halloween themed dance party. There was a fairly large crowd, especially when compared to what the party typically looks like during normal park hours.

In past years there was another dance party in the Diamond Horseshoe, and I really wish they would bring that back. Having multiple dance parties throughout the Magic Kingdom would really help the atmosphere making Mickey’s Not-So-Scary Halloween Party truly feel like…well…a party! Throughout the night there were 12 traditional Trick-or-Treat locations and 2 allergy friendly locations! The free candy helps make a random night in August feel like Halloween night. The locations offer handfuls of candy like Skittles, Snickers, Dove Chocolates, and so much more!

Every year the free candy garners long lines, and so I was slightly disappointed that Disney didn’t add more Trick-or-Treat locations. It can be fairly frustrating to be waiting in line for candy longer than the lines for Space Mountain.

Thankfully later in the night, the lines do get a lot shorter, and it becomes a lot easier to collect candy. I recommend earlier on in the night to hold off on trick-or treating, and to enjoy riding attractions, or finding other fun things to do around the party, and then trick-or-treating later on in the night. To be honest this was my least favorite Mickey’s Not-So-Scary Halloween Party that I’ve been to. It isn’t that this party was bad, but I just really think the party needs something new to it. They added the Hocus Pocus Villian Spelltacular a few years ago, and now I think it is time for something else to change to keep this party fresh. Maybe a new parade? I also think with the party starting so early this year it was hard to get into the Halloween spirit in the August heat.

I will be going to another party later this fall, so I believe that this party is 100% worth the money, but I want something bigger and better from Disney. Maybe my expectations are set too high, but I just wanted more.

The one thing I definitely want to give Disney props for was the number of new character interactions this year at the party including Prince Eric being with Ariel, Moana, Belle, and Gaston together, and so much more. There seemed to be characters around every corner, which deserves praise.

Overall I enjoyed my experience, and I always love Mickey’s Not-So-Scary Halloween Party, but for some reason this year just lacked the magic I usually expect from the party.