Alien Swirling Saucers is Even Better for the Holidays 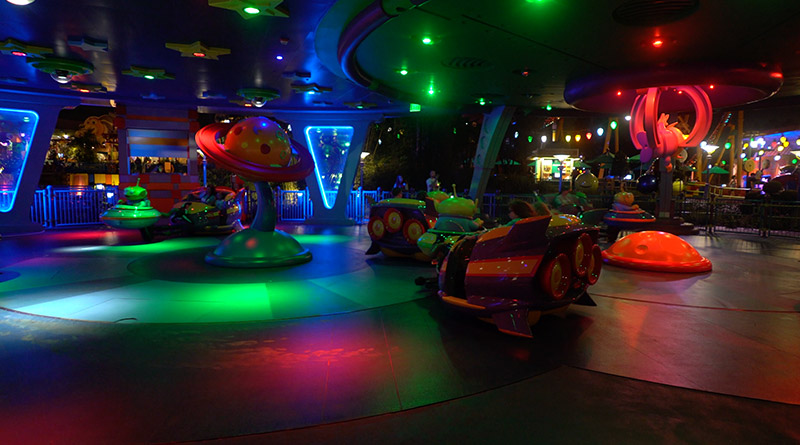 When it was announced back in July that Toy Story Land would be getting a holiday overlay in its first year of being open, I was most excited about Alien Swirling Saucers receiving new songs for the holiday season. One of the highlights of Cars Land in Disney California Adventure for me is Mater’s Junkyard Jamboree along with its special holiday overlays, so it only makes sense that Alien Swirling Saucers would need the same treatment. I’m happy to report that Disney succeeded in bringing the cheer of the season into Toy Story Land’s simplest attraction – but there’s a catch!

If you’re heading to Alien Swirling Saucers expecting to hear one of the two Christmas songs (“Deck the Halls” and “Up on the House Top”) then you might be disappointed. Instead of making it a complete holiday experience, Disney has opted to keep its regular rotation of music in the mix as well. This does add a special surprise to the attraction if you happen to just get lucky and “Deck the Halls” techno-style, but there is a solution for those of you who are like me and don’t enjoy leaving it up to the fates to decide.

Every third song will be one of the two Christmas tunes, so pay attention to what is playing on each side when you get close to boarding. You can’t rely on the Cast Members to be listening to every song that is playing in the noisy environment of Alien Swirling Saucers, but if you do the work yourselves and let them know you’d like to ride the “holiday version” when the next song is in the cycle, then the amazing Cast Members there should be able to accommodate you.

Hopefully this is just a stepping stone for Alien Swirling Saucers and a bigger holiday overlay is in the mix for the future. It would be amazing to see actual decorations throughout the attraction or extra Christmas songs added to the mix. As it gets closer to Christmas, I wouldn’t even be disappointed if they just played the two songs over and over again to help add to the Holiday Cheer in Toy Story Land that also includes enhancements to Slinky Dog Dash, new menu items at Woody’s Lunch Box and area decor!