DIS Unplugged Auction for Give Kids The World! Your support is Giving Hope To Wishes
By Laci Post 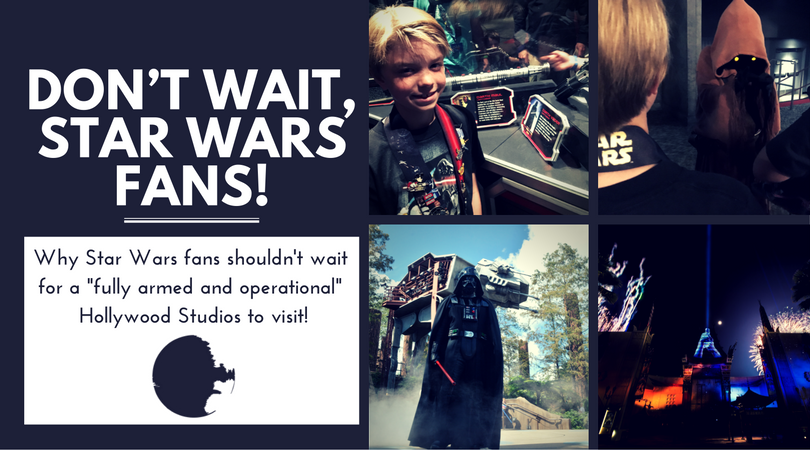 ShareTweetSubscribe
Sure, a large part of Hollywood Studios is under construction, but don’t wait to visit the theme park. It is still an out-of-this-world experience for the true Star Wars fan with many new offerings. Here’s why: This fireworks show is one of the best Disney has ever put together. Images, special lighting, and iconic music come together to dazzle fans with all the scenes and characters from their favorite movies. What better way for a Star Wars fan to spend their night than by listening to John Williams’ music as fireworks and lightsaber beams fill the air! Be sure to check Disney’s entertainment schedule before visiting as dates and times of fireworks shows often change, particularly during holiday seasons. Who doesn’t want to meet Chewbacca? At the Launch Bay, you and your family can enjoy some personal time with this lovable wookie. You can also conquer your fears and meet Kylo Ren. Beware, the First Order villain may try to recruit you to the Dark Side of the Force! Also, in the Launch Bay, you can see replica props and costumes from the Star Wars films, watch a short film about the movies, play special games, and even grapple with a Jawa for a trade! (The Jawas didn’t like what we had to offer! Maybe, next time.) Jedi Training: Trials of the Temple

Do you have a youngling between the ages of four and twelve who has an urge to battle the Dark Side? In this updated Jedi training show, Jedi Knights teach kids how to handle a lightsaber and use the Force for a victory. The young Jedi then get to test their skills firsthand when Darth Vader shows up unexpectedly. The kids also get to do battle with a new villain, the Seventh Sister Inquisitor from Star Wars Rebels. Beware, other villains may appear! New Star Wars adventures have come to Star Tours! Characters and locations from Star Wars: The Force Awakens have been added to the flight simulation ride to make your journey even more unpredictable and exciting. You may still find yourself on Naboo or the Death Star, but new destinations also await. Look out for my favorite, BB-8! If you can’t get enough of your favorite Star Wars characters, watch the new Star Wars: A Galaxy Far, Far Away stage show right on Hollywood Boulevard. Darth Maul, Darth Vader, Kylo Ren, BB-8 and many more take the stage to recreate favorite movie moments. Also for entertainment, watch Star Wars: Path of the Jedi. This ten-minute film will take you through the history of the Jedi Order and give you a peek at what is yet to come. Almost every store in Hollywood Studios sells Star Wars merchandise. There is a plethora of apparel, action figures, art work, lightsabers, pens, and more to choose from. There is something waiting for every fan! So, Star Wars fans, don’t wait! Make plans to visit Hollywood Studios today.
ShareTweetSubscribe
GET A NO-OBLIGATION DISNEY WORLD PACKAGE QUOTE