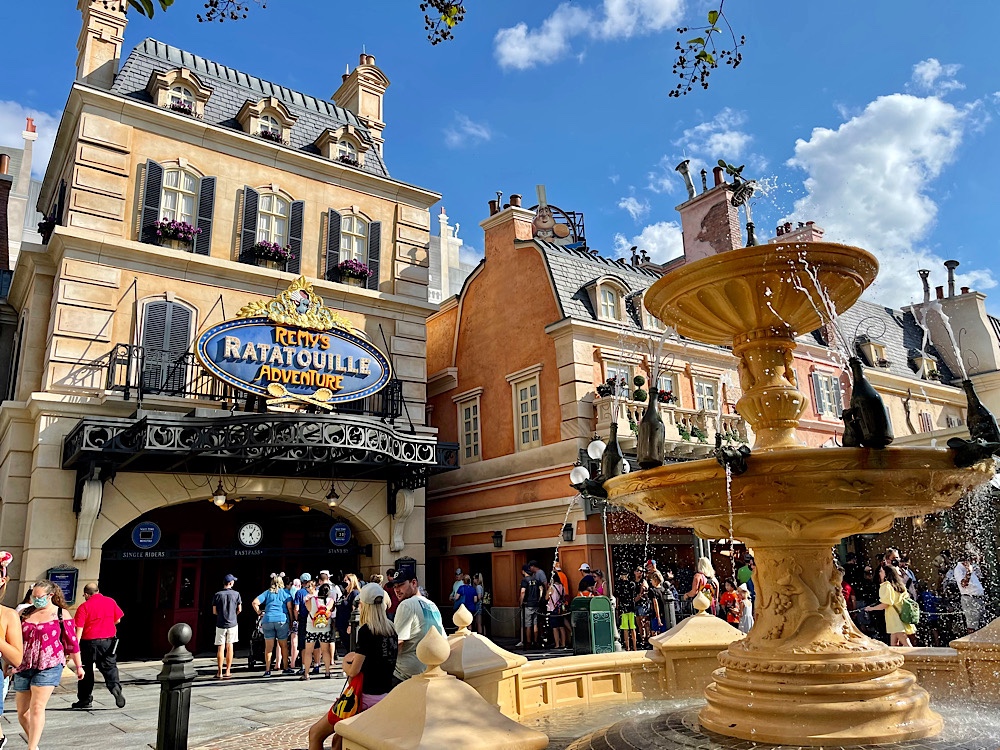 Thanks to an Annual Passholder preview, I just had the chance to step behind the walls and explore the expansion of EPCOT’s France pavilion. I had the chance to ride Remy’s Ratatouille Adventure and really dig into the details of the new area. If you’d like a sneak peek at the fun that awaits when the expansion and its marquee attraction open on October 1st, let me give you a tour!

Stepping foot into the rest of the expansion today, I’m happy to report that the charm of the first space carries throughout the remainder. It’s completely lovely and will woo you from word “go.” The watery, dreamlike color palette continues, with patinated highlights found on wrought iron throughout.

As you approach the attraction itself, things take on a slightly askew format. Drain pipes take hard angles, and everything takes on a slightly cartoonish (in a good way, trust me) quality. You’re in Remy’s Paris now, as opposed to the realistic version of Paris found in the original portion of the pavilion.

If you’re a fan of the movie, you’ll find nods to the film and its characters throughout the expansion. Remy’s story is shown on the manhole covers near the feature fountain. He’s depicted as he paddled downstream and into the sewers atop Chef Gusteau’s book.

Infamous food critic, Anton Ego, has found a new life chapter as a vintner, and bottles of his wine can be found displayed in his shop’s window.

Remy and his friends and family can be found frolicking around the area’s massive fountain, which, in person, is more gorgeous than you can imagine. It gives such movement to the space.

And the Gusteau’s sign on top of the attraction building? The first time that I saw it from afar (you could see it over the construction walls), I just stood there staring at it. I couldn’t believe that it was actually there. In real life.

Taking a brief look at the attraction itself (I don’t want to spoil things too terribly for anyone), from the moment that you step foot into the queue, you’re introduced to the major characters from the film. If you haven’t seen Ratatouille, the queue will get you up to speed, and you’ll sit in the attraction vehicle knowing everything that you need to know.

The attraction uses a trackless ride system (think Rise of the Resistance or Mickey and Minnie’s Runaway Railway or, of course, Ratatouille: L’Aventure Totalement Toquée de Rémy in Disneyland Paris), and it “shrinks” guests down to the size of a rat to follow Remy along on an adventure. Watch for the hints hidden throughout the attraction regarding your size. Even the tiles on the floor help to convey the attraction’s storyline. This is an attraction for guests of all ages, and, like the rest of the pavilion, is completely charming.

My first time in the France pavilion expansion is something I’ll never forget. As a Ratatouille fan, it was everything that I hoped it would be. And anytime that you and I as Walt Disney World fans get to step into a brand-new area, it’s just pure magic.

It is a ride on Remy’s Ratatouille Adventure on your must-do list for your next Walt Disney World visit?