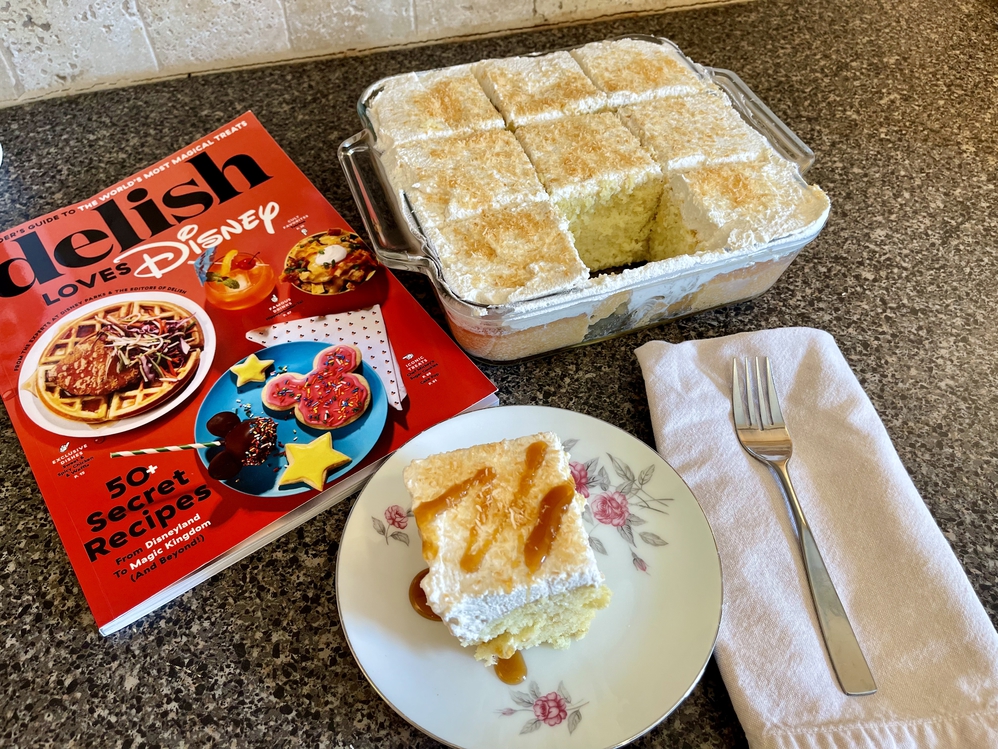 I was this close to taking my first-ever bite of Tres Leches Cake last week. My hubby and I zipped over to Three Bridges Bar & Grill at Coronado Springs Resort to try Craig’s favorite burger on property (which, by the way, didn’t disappoint), and Tres Leches Cake was on the dessert menu. Unfortunately for the cake, housemade churros were also on the menu. The churros won. While the churros were delicious, it’s left me wondering what I missed by not having the cake. That wondering ends today.

Today’s Saturday Snacks recipe comes to us from the ever-faithful Delish Loves Disney, which states that the Tres Leches Cake recipe originates from the EPCOT International Food & Wine Festival. After doing quite a bit of digging on the internet (again, I feel like a detective trying to figure out what’s what with Disney’s recipes sometimes), and while I found a Tres Leches Cake recipe from years ago, it’s from Flower and Garden Festival, not Food & Wine. And it’s a different recipe altogether. SO WHO KNOWS? This is the part where you and I take a deep, cleansing breath, make the Disney snack, and shove that yumminess into our mouths without asking questions. Just bake and eat.

From what I understand, Tres Leches Cake has it roots in either Mexico or Nicaragua, depending on who you ask, and it’s the go-to cake for all the celebrations. Birthday or Quinceañera? This is the cake for the job. Shower? Yep, Tres Leches Cake will be sitting on that table next to the punch bowl. Big family anniversary? You guessed it; this cake is the one. Just knowing that so many people celebrate the biggest moments in life with this treat really elevated my expectations. This has to be good, right?

The ingredient list has us digging back into the pantry to grab that bag of unsweetened shredded coconut that we used for ‘Ohana’s Pineapple Coconut Breakfast Bread two weeks ago. We’ll be toasting half of a cup of the shredded coconut using a super simple and very quick method, but if you’d rather skip a step, grab a bag of toasted shredded coconut at the store. You’ll also need a bottle of lemon extract (aka magic in a bottle) and a lemon. Please pretend that there’s a lemon in the picture above. The poor thing got forgotten about in the fruits and veggies drawer until it was too late.

I grabbed my square baking dish from the cabinet (I had on my mind to purchase a metal baking pan this week, but for some reason didn’t look at my list when I was actually at the store…that would be too easy, right?), so Pyrex dish it was. I gave it a good coating of spray oil to make sure that the cake didn’t stick.

In a small bowl, I whisked together 1 1/2 cups of cake flour, 1 teaspoon of baking powder, and 1 teaspoon of salt. Once the dry ingredients are thoroughly combined, you and I get to set the bowl aside.

Ahhh…lemon zest. One lemon yields roughly 2 teaspoons of zest, and all you need to do to get the zest for the job is to grate the lemon on a fine grater. When you get to the white pith on a certain spot, turn the lemon and keep on going until the entire rind has been grated.

Toss in your teaspoon of zest and turn the mixer on to combine everything.

My next step was to drop the eggs into the batter one at a time and combine completely after each one.

I next affixed the pouring shield onto my stand mixer and added half of the flour mixture that we set aside earlier. I turned my mixer up to medium until things were combined, and then added the rest of the flour and ran the mixer again. Don’t look now, but you and I just made the batter for the cake. It’s that simple and easy.

I poured the batter into my greased pan and popped it into the 325 degree oven. I set the timer for 23 minutes (I like setting it just shy of what the recipe says just in case) and walked away.

At 23 minutes, it was clear that more time would be needed to get the cake where it needed to be. The recipe asks that we allow the cake to bake until it’s firm to the touch and a toothpick comes out clean. The cake seemed firm after 31 minutes, but the toothpick did not come out clean. I placed it back into the oven with a bit of a grumble for another 6 minutes.

Thankfully, when those 6 minutes were up, the toothpick came out clean and I placed the cake on a rack to cool. We’re to summon a bit of patience as the recipe now asks us to allow the cake to cool to room temperature. The process of cooling the cake took roughly an hour and 20 minutes, and, to be completely honest, even then it was still slightly warm. I won’t tell if you won’t, mmmkay?

Our next step is to poke the cake 30 to 40 times with a fork. And when you stab that cake, really stab it. You’re gonna want the three milks you’re about to drown your cake in to thoroughly sink in. Those holes will be conduits of deliciousness, so put some umph into it.

I next grabbed a medium bowl out of the cabinet and measured out and poured in 1 cup of whole milk, 1/2 cup of sweetened condensed milk, and 1/2 cup of cream of coconut.

I whisked the three together, transferred the mixture into a measuring cup to have better control over the whole pouring process, and proceeded to slowly pour the milk mixture over the entire cake.

I must say that I was a bit nervous when I surveyed the vast amount of milk in which my cake was now swimming. And this was the moment when the lightbulb went on and I remembered that my baking dish is actually 8 x 8 inches, not 9 x 9. Gulp. Ohhh how I hoped that the size wouldn’t mean that my attempts to make this cake would end tragically.

We’re to now put the cake into the fridge to rest for at least an hour. I spoke an encouraging word to my cake, placed it on the refrigerator shelf, and closed the door. Please soak up all that milk, little cake…

While the cake was in time out, I jumped back to the internet to confirm what I’d learned earlier in the week: toasting shredded coconut is easy. Thanks to My Baking Addiction, I learned that you sprinkle your desired amount onto a baking pan, spread it out evenly, stir it halfway through and give it 5 or so minutes in a 325 degree oven. That’s it. Seriously. And what comes out of that oven will be seriously yummy. I was shoveling teaspoons of it into my mouth before everything was said and done.

I checked on the cake halfway through and the whole cake-as-a-sponge thing actually seemed to be working. When the timer sounded after an hour, I opened the fridge door and did a happy dance. It worked! The cake had soaked up all of the milk!

Our final step is to place 1 1/2 cups of heavy cream and 1/2 teaspoon of cinnamon into a large bowl and beat them with an electric mixer on high until stiff peaks form. I love that the recipe tells us that the end result should resemble the mountain from The Nightmare Before Christmas. ‘Nuff said, right? Cheeky, Disney. Cheeky and perfect.

When the topping reaches the desired firmness, you can either cut the cake and top each slice individually, or you can go the route that I did and ice the whole thing, sprinkle a generous amount of toasted coconut on top and cut the cake from there.

After plating each slice, take that caramel sauce and drizzle it over it as liberally as you desire.

Once the cake has been sprinkled with toasted coconut and drizzled with caramel, stand back. Just look at what you’ve done. You’ve made a Tres Leches Cake. Something that graces menu after menu and table after table, and has made an appearance on Walt Disney World property. And YOU’VE DONE IT.

This cake is nothing short of incredible. The recipe is foolproof (I speak from experience), and produces the most amazing treat.

The topping isn’t sweet, which is perfect because the cake is soooo delightfully sweet. It’s also coconutty (now a word), moist, and rich. So very rich.

I had no idea prior to planning to make the cake that it involved lemon. I am a ginormous fan of anything and everything lemon. The citrus in the lemon cake gives the treat a lovely brightness. The layers of flavor going on in this dessert all work together to make a cake that everyone will love.

I’ll be making this again. No doubt about it. It’s good, easy, and uses simple ingredients. And the end result will have people dancing a little happy dance. What’s not to love about that?!

Friends, if you make the Tres Leches Cake, please let me know so that I can do a little happy dance in your honor. Whatever you’re up to this weekend, may it be a couple of days filled with the sweetest of moments. You deserve nothing less.

Ready to give EPCOT’s Tres Leches Cake a try? The recipe is below:

This festival favorite is more custard than cake. That’s due to the three types of milk – the tres leches – it soaks in: whole milk, sweetened condensed milk, and cream of coconut.