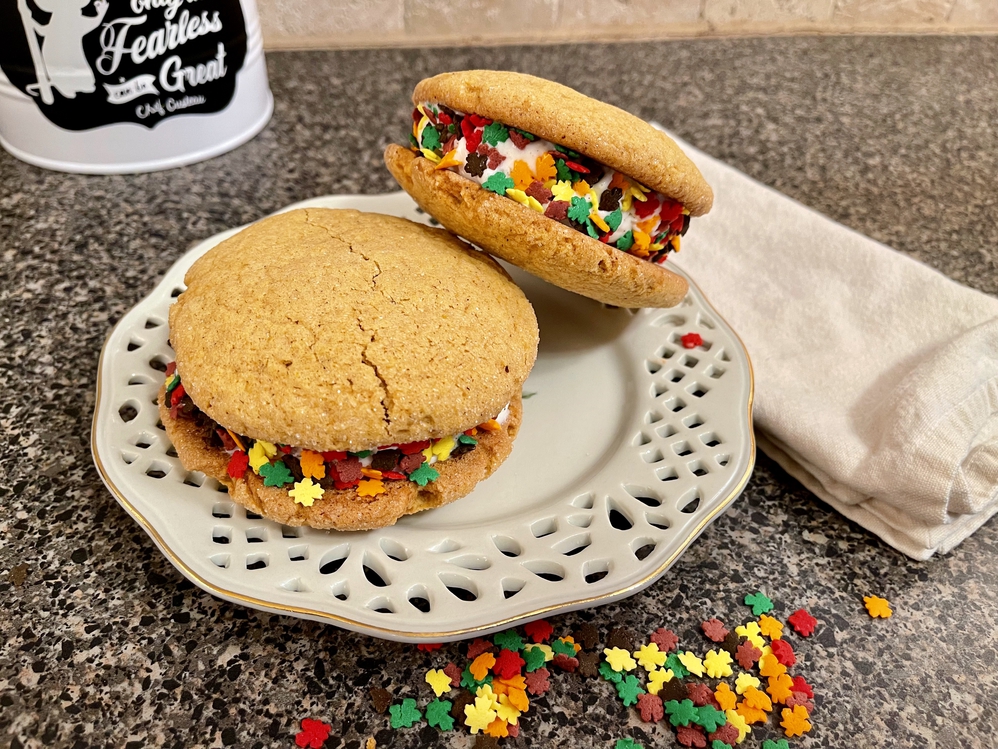 Friends, I have had today’s Saturday Snacks recipe in the hopper for an entire year. It was a recipe that Disney released last fall that I just never got around to, and I’ve had it floating in the back of my mind ever since. I’m so glad that it’s the first weekend of fall and you and I can truly embrace this recipe in all its glory. Because, spoiler alert, this snack brings the GLORY.

We’ll be turning our attention to a snack that was offered last year in Disney’s Animal Kingdom. Side note: don’t you just love it when you have the opportunity to make a treat that is or was being served very recently in the parks? Last November, Disney decided to create a little magic by allowing guests who were stuck at home to be able to make some of their sugary goodness in the comfort of their own kitchens. Love that.

The Pumpkin Ice Cream Cookie Sandwich could be found last year at Dino Bites in the DinoLand U.S.A. section of the park. It sold for $6.99, and you and I are going to whip up its magnificence today for much less than $6.99 each.

You really know it’s autumn when you buy a can of pumpkin purée, don’t you? Today’s ingredients list has us going back to some of those tried-and-true autumnal spices and flavors that we’ve gotten to know and love over the past 18 months here at Saturday Snacks. You’ll need a little bit of everything spice-wise, including some fun fall-themed sprinkles.

Finding the sprinkles for my cookie sandwiches was a huge win for me. I found them on Amazon (linked here), and they look exactly like the sprinkles that were used for the in-park version. SCORE! The closer I can get to the original, the better. This always causes a happy dance in my house.

Take a whisk to the flour and spices, and keep going until everything is combined. Set the bowl aside. And savor the amazing autumnal smells wafting through your kitchen right now. It’s a really good thing.

Once the butter and sugars are creamy and lighter in color, add in the egg yolk and 1 teaspoon of vanilla extract. Get that mixer going again (this time on low speed) and make sure that everything’s fully combined.

Now’s the time to add the consummate fall baking ingredient: pumpkin purée. We’re only going to be using a third of a cup, so be sure to hunt down another recipe to use up the rest of the can. Or make a double batch of the pumpkin cookies that you and I are currently making ’cause you’re going to want them. Trust me.

I measured out a 1/3 cup of the pumpkin purée and added it to the mixing bowl on low speed. As the recipe points out, it’s important to scrape down the sides of the bowl. This cookie dough is incredibly soft, so it tends to cling to the sides. Scrape that bowl down. No dough left behind.

I next slowly added the dry ingredients into the bowl and ran the mixer to ensure that things were nice and combined.

Once everything looked good, I grabbed a 1/4 cup measuring scoop out of the drawer and began to measure out eight balls (the dough is soft, so they weren’t looking like balls just yet) of dough like the recipe instructs. When you’re scooping out 1/4 cup-sized mounds of dough, you know those cookies are gonna be big. Yummm. I ended up getting nine cookies out of the bargain, so I was even happier.

Place your dough on a parchment paper-lined platter and stick the platter in the fridge for an hour. That super soft dough needs to firm up quite a bit before we go throwing it in the oven.

When the hour was up, I grabbed the platter out of the fridge and placed the last 1/2 cup of granulated sugar into a bowl. I formed each mound of dough into a ball shape, rolled each dough ball through the sugar, and made sure that each one was thoroughly covered.

I placed four of the dough balls on a baking sheet that I had lined with parchment paper. With cookies this large, I wasn’t sure exactly how much they’d spread, so I just stuck with four at a time. Better to be safe than sorry, especially when cookies are involved.

The recipe doesn’t ask for us to flatten out the dough balls before placing them in the oven, so decided not to with the first round. I figured that I’d change things up with the second batch if I needed to.

The recipe calls for us to leave the cookies in the oven for 17-20 minutes, but as I’ve become accustomed to, I popped the cookies into the oven and set the timer for only 15 minutes. When the timer sounded, I knew that the cookies needed more time. And I also knew that the next round of dough balls needed to be flattened prior to placing them into the oven. These were puffy, the centers weren’t quite set, and the edges were nowhere near brown. I set the timer again and again in 2-minute increments until they reached 26 minutes total and I felt that the cookies were actually done. Twenty-six minutes of baking time further solidified the thought that I needed to flatten the next batch out.

The next four went onto the sheet, I pressed them out a bit with a spatula, and popped them into the oven. It took a total of 20 minutes for the centers to set and the edges to brown just a bit.

When they came out, they were exactly what I wanted them to be and looked just like the picture on the recipe. Whew!

I placed the cookies on a cooling rack and allowed them to cool completely before moving on to the next – and most fun – step. While the cookies were cooling, I opened the bag of colorful fall leaf sprinkles and spread a generous amount onto a plate. If you like sprinkles, really pour ’em out. You get to call the shots here.

I kept going until I had made two sandwiches, and I figured that that would be enough for the time being. Friends, this was a time of rejoicing in my kitchen. The cookies? So good; soft in the middle, with a crunch on the outside thanks to the sugar that we rolled them in.

How much fun is it to make a Disney World treat that sold last year for $6.99 in your very own kitchen?! SO MUCH FUN!

And truth be told, the other cookies were eaten throughout the week without ever becoming ice cream sandwiches. They were THAT GOOD. And the two original ice cream sandwiches? I ate half of one immediately, and saved the other 1 1/2 in baggies in the freezer that I then consumed when I needed them most later in the week. We should all have Animal Kingdom ice cream sandwiches on demand in our freezers. I believe that we can all agree that we deserve nothing less.

The only note I’d make is that the cookies, while absolutely delicious, were light on the pumpkin taste. I’d like to boost that in the future (if we’re gonna do pumpkin, let’s really do pumpkin), so I’ll be scheming about how to accomplish that. More purée might throw the consistency off. It turns out that pumpkin flavor extract is a thing, so maybe that would help. Hmmm. That being said, I can’t stress how very much I hope you make these pumpkin cookie ice cream sandwiches. They’re the prefect way to usher in the very first weekend of fall.

I’m so thankful that you stopped by to give this a read. Whatever autumnal goodness you have on the docket this weekend, I hope that you’re able to savor of moment or two (or forty-five) of magic. Especially if that magic has you sinking your teeth into something sweet. Take good care, everyone!

Ps If you’re new here to Saturday Snacks and you’d like to catch up on the Disney snack-making hijinks we’ve had thus far, click here.

Ready to get out the sprinkles and bake up a little Disney park fun? The recipe for the ice cream sandwiches is below: