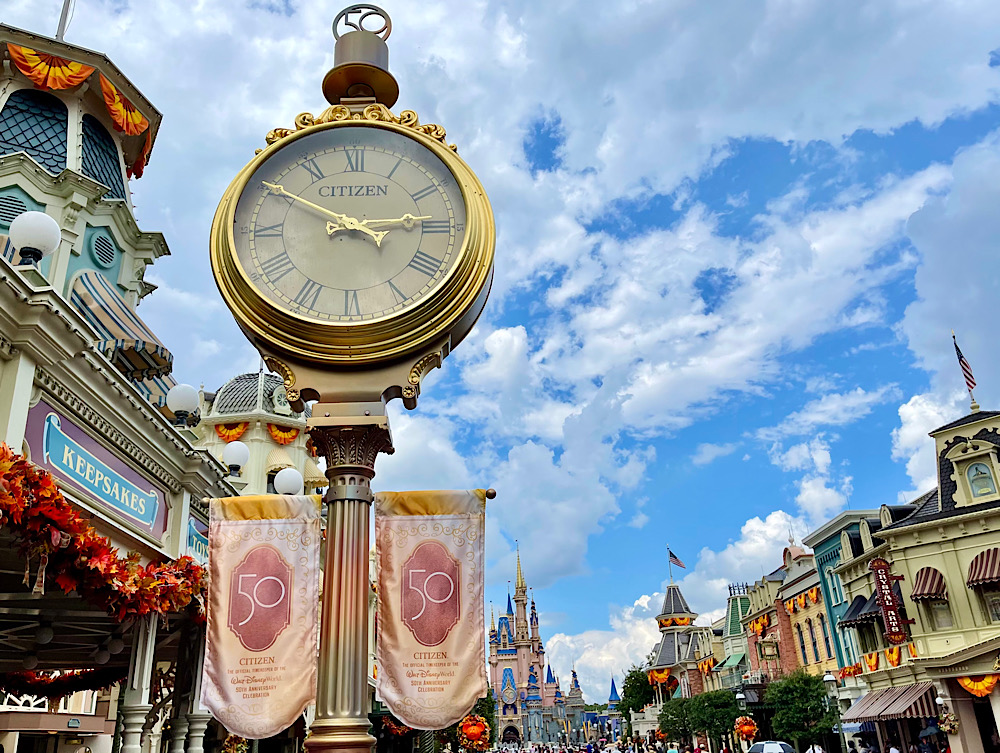 All that glitters is definitely gold these days at the Magic Kingdom! Let’s take a quick look around at some of the changes that have come as the park is being readied for Walt Disney World’s 50th Anniversary.

First things first: if you’re taking transportation to the Magic Kingdom from the TTC, you’re going to notice that the arches that lead to the walkway for the both the monorail and the ferry have received makeovers. The arches, as well as the tops of the advertising kiosks, are now clad in gold and blue.

An EARidescent anniversary banner backdrop has been added to the flower bed located in front of the train station. The banner sets a celebratory tone right from the start.

You’ll notice heading down Main Street U.S.A. that just about anything that could be brightened up, has been. The base of the park’s flagpole is gorgeous in bright gold, and the street’s clock has received an EARisdescent paint job in both gold and rose gold. The filigree around the clock‘s face is just gorgeous.

New banners that hang from the clock proclaim that Citizen is “The Official Timepiece of the Walt Disney World 50th Anniversary Celebration.” I didn’t realize that we needed an official timepiece, but just in case we did, we now have one.

The Hub’s railings are shining brightly, and that castle, well, it’s just magical. We can debate the whole rose gold (or is it mauve?) color another day; let’s just enjoy all of the embellishments today.

We’ll be sure to keep you updated as further additions and changes arrive at the Magic Kingdom and the rest of the Walt Disney World parks. What are you hoping will receive a makeover as the big day draws closer?