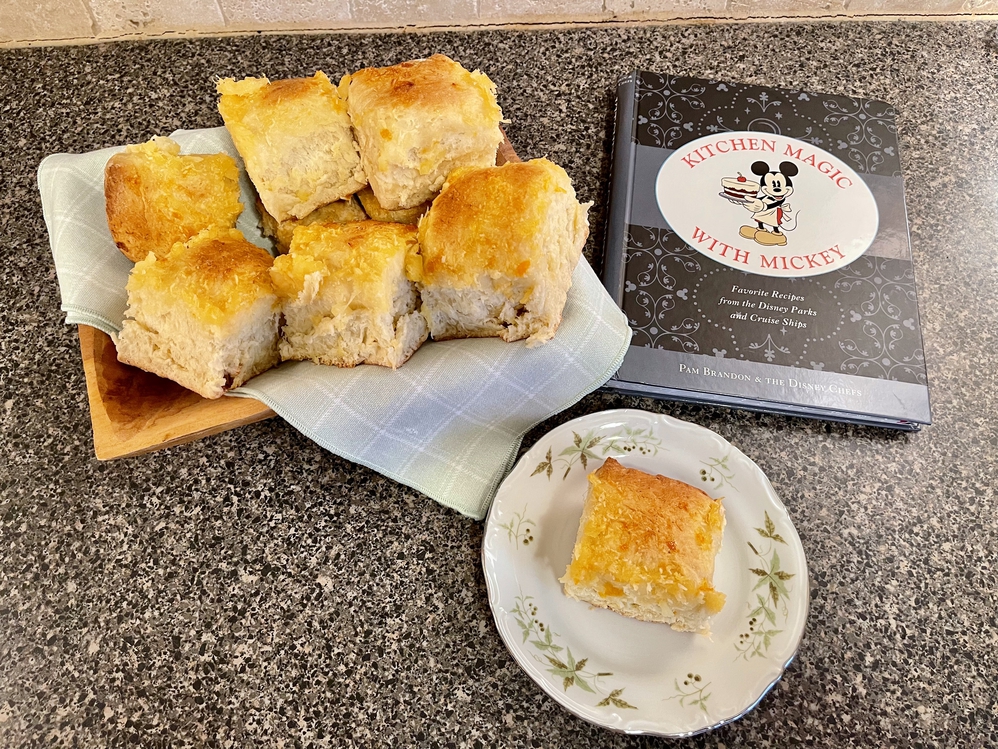 There are things that are offered on Walt Disney World property that have, over the years, been elevated to iconic status, and today’s Saturday Snacks recipe rests firmly in that category.

Hear ye, hear ye. I hereby call today’s session of The Society of Disney Carb Lovers to order. We’re traveling virtually to ‘Ohana at Disney’s Polynesian Village Resort for their Pineapple Coconut Breakfast Bread. This bread, oh so slightly tropical in taste, is much beloved. And it also makes an appearance on the dinner menu as the base for the equally-loved bread pudding dessert.

While I’ve not been back to ‘Ohana since their recent reopening, thanks to Fiasco and Haley’s review on the Disney Dining channel, we know that the breakfast bread is still on the menu. Although, it does seem to now have a glaze ribboned across the top and no crushed pineapple like we’ll use in today’s recipe. Speaking of today’s recipe, we’ll be using the official one found in Kitchen Magic with Mickey: Favorite Recipes from the Disney Parks and Cruise Ships. After doing a little research, I discovered that there are two recipes for this bread floating around out there. Since it’s a standard here at Saturday Snacks to only use official Disney recipes, we’ll be sticking with the one in the cookbook today.

Our ingredients have us pulling from pantry basics, with the exception of unsweetened coconut and a can of crushed pineapple. My sweet hubby was the one to run to the store for me, and the Target that he stopped at only had the organic, finely chopped variety of unsweetened coconut, which turned out to be just perfect. One of my fears was that the coconut, when used for the bread’s topping, would just be too chunky. Potential problem solved. Whew.

Don’t you just love recipes that consist in large part of simply dumping a bunch of ingredients into a bowl? Yep, me too. Today’s recipe calls for us to do just that, which makes it even more perfect for the weekend. Don’t ask us to do too much, recipe. We’ve been doing all the things ALL WEEK LONG; we don’t need a bunch of fuss today, thanks.

We’re to toss the first seven recipe ingredients into the bowl of a stand mixer that’s been outfitted with a dough hook attachment.

I placed 1 3/4 cups of water, 3 egg yolks, 5 cups of bread flour, 2 teaspoons of salt, 2 tablespoons + 2 teaspoons of shortening, 1 tablespoon of fast-rising yeast, and 1/2 cup of sugar into the bowl and turned the mixer on to the slowest speed.

Once things started clumping together, I turned the mixer to speed 2 and kept it rolling until the dough pulled away from the bowl and the sides of the bowl were mostly clean. I then made the decision to smoosh (technical baking term) the dough back down into the mixer and run it for a minute or so longer. The ingredients just didn’t quite look fully combined, but I also knew that if I ran the mixer too long, the bread could end up tough (this is just a tiny bit of foreshadowing), so I just stuck with an extra minute or so. Ahem.

Once the dough was ready, I pulled the bowl off of the mixer, covered it with a kitchen towel, and placed it in a warm spot to rise. After poking around on the internet, I had a feeling that it would probably take two hours or so, so I set the timer and went about my business.

Lo and behold, after two hours, the dough was almost double in size. I moved the bowl to a windowsill and gave it about 30 more minutes to rise.

That 30 minutes made a big difference, and I turned the dough out onto my floured counter and preheated the oven to 325 degrees.

As per the recipe, I rolled the dough out to a 2-inch thickness and squished (another technical baking term, I know) it into a greased 9×13-inch pan. As I write this, I’m just now realizing that I used my 9×13 glass pan rather than my 9×13 metal pan, so next time I’ll try the metal pan to gauge the difference.

I next grabbed my pizza cutter out of the drawer and ran it through the dough to cut it into somewhat bigger than 2-inch squares. I started out with the best of intentions, but definitely ended up making them just a hair larger.

Our last step before popping the bread into the oven is to combine the last three ingredients in a small bowl and spread the mixture onto the top of the dough. All that’s needed for the topping is 1/2 cup crushed pineapple (I drained mine though it’s not specified to do so), 2 tablespoons of unsweetened coconut, and 3 tablespoons of apricot jam. Quick aside: holy cannoli apricot jam is simply delightful. When you’re done with the recipe, smother the nearest carb with that jam and shove it into your mouth.

Stir the pineapple, coconut, and jam until they’re completely combined and then spread that sweet stuff over the dough.

After 5 minutes, it was clear it needed more time. Fast forward to me checking the bread EVERY FIVE MINUTES until it reached 50 minutes. No joke. I even pulled the bread out of the oven after 35 minutes to pull a piece out and check it, and it wasn’t fully baked through.

Once the dough finally turned golden brown and came out of the oven, I set it on a trivet to cool, until, as the recipe asks, the dough could be pulled apart. I pulled it apart, and nibbled on my first piece.

First of all, HOMEMADE BREAD. Amiright?! It’s just so much fun to make and so much fun to eat. I’m always surprised when bread that I’ve made actually turns out. It’s just always seemed so unattainable, but I have to say that it really isn’t.

The bread was slightly more dense than what I feel it should be, and I’m pretty convinced that the extra running of the stand mixer is to blame. Next time, I’ll stick to turning the mixer off as soon as the dough pulls away from the bowl and the sides are clean.

That being said, the bread was great. It had a light taste, and, although firm, I didn’t mind that it was on the more dense side of things. It was perfect with butter. And that apricot jam, oh yeahhhhh.

The topping was nice and fruity and provided a tropical taste to things. The coconut that my hubby picked up? It was perfect! The finer chopped the shredded coconut, the better. Next time? I’ll be finding a way to add a bit of sweet taste throughout the bread as well. That tropical goodness shouldn’t be limited to the topping alone. It looks like they’re skipping the crushed pineapple on top of the bread in the restaurant these days, so I might omit it next go ’round.

Thanks so much for stopping by and reading! Whatever you end up baking or making this weekend, I hope that you savor every bite. You deserve nothing less.

Ps. If you’re new ’round Saturday Snacks and you’d like to catch up on what we’ve been up to thus far, click here.

Want to usher a taste of ‘Ohana into your kitchen? The recipe is below:

This sweet bread is best hot from the oven. It’s a family favorite at Ohana, we’re guests enjoy Hawaiian specialties, including grilled meats cooked over a wood fire.