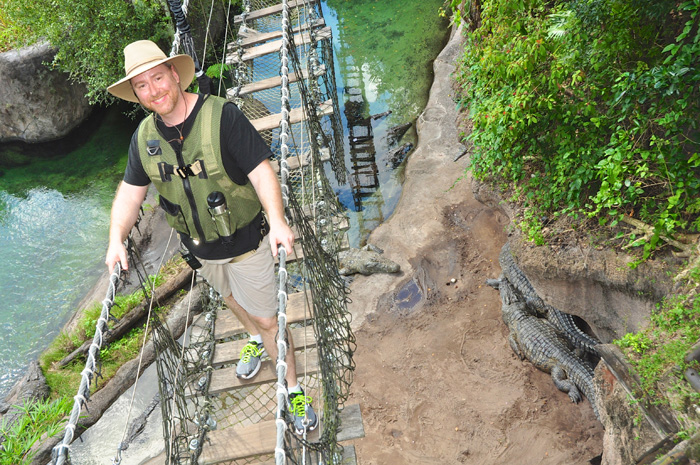 Fully equipped for the tour, we were introduced to our two trek guides who went over basic tour information, gave us a brief lesson of a few Swahili words, and made sure we knew how to use the audio equipment.

To kick off the tour, we took a brief journey over to the Pangani Forest Trail to have a look at the primates. The guides spoke about the gorillas and other monkeys in this area. This was fun, but it wasn’t part of an exclusive area. We were itching to move on to the backstage adventure, and we soon got our wish. Our tour guides gave the signal to follow, and they led us past a private entrance where the real fun began. We hiked our way through Disney jungle, making our way toward a clearing and gate. One of our guides spoke to us while we walked. The audio equipment worked great. I was able to hear them loud and clear even if I wasn’t at the front of the group, so I didn’t have to worry about missing anything.

As we approached the gate, one of the guides helped us clip our harness onto an overhead cable and we walked out onto a cliff overlooking a pool with two large hippos, Hans and Henry. Our guide filled us in with interesting facts about their anatomy and behaviors, all the while tossing lettuce for them to munch on. We got an up-close look at their massive teeth as they chomped away on their mid-day snack.

After saying good-bye to the hippos we walked a little further until we came upon a set of long, scary-looking rope bridges overhanging a crowd of huge crocodiles. The bridges look rickety, but the “ropes” are actually made of steel. One at a time our guides hooked us into suspension harnesses, and gave us the signal to start crossing. Only two guests were allowed on the bridge at once, and they had us spaced out so no one felt rushed. We traversed the bridge slowly, pausing at points to watch the lazy, sunbathing crocodiles and hippos playing in the Safi River below. They looked so close, and we were only about ten feet above the massive reptiles. Crossing these bridges was definitely a highlight of the tour. At the end of the two bridges, we stopped at an overhang above the crocodiles, learned a little more about them, and then departed in a safari bus that whisked us off to the next half of the tour.

The second part of the tour was all by vehicle (an open-concept version of the Kilimanjaro Safari vehicle). Upon boarding the bus, we were each given a small chilled towel to cool off with. This was a nice treat after being in the hot sun for the first part of the tour. We made our way through the winding savannah roads, and even pulled off the road to observe several animals from our bus. Our tour guides were very knowledgeable about all the wildlife on the reserve. Now we are able to impress our friends with fun facts about giraffes and zebras.

About two thirds of our way through the tour, we stopped at an enclosure, or “boma,”  in the middle of the savannah and got off the bus for a 30 minute break to eat and take photos. The view was breathtaking: we had a clear panorama of the entire Harambe Wildlife Reserve. We watched the Kilimanjaro Safari buses weave through the park, and we watched all sorts of different animals roaming the plains. It was so beautiful and relaxing.

This is where we had our African-inspired snack, which was served to us in a two-tiered, tin camping set. The top tier was crowned with a beautiful, and edible, purple orchid. The snack was pretty good! My husband isn’t what you would call adventurous when it comes to food, but there were even things he liked and was able to enjoy. He didn’t touch the chicken curry for example, but he nibbled on the fruit, shrimp, and hummus. We both loved the Jungle Juice (tropical fruit juice blend).

After filling up our tummies and our water bottles, we loaded back into the safari vehicle. We stopped to view several more animals: We got great photos of the white rhinoceros. The lions were tucked away in their habitat when we drove by, so we only caught a glimpse. Watching the African elephants at play was fun. This concluded our tour, so we made our way back to where we checked in.

A portion of our tour ticket price is donated to conservation efforts through Disney’s Wildlife Conservation Fund. As we exited our tour vehicle, each guest got a stone. We were able to decide where the funds for our ticket were allocated by putting the stone in a box marked for a specific animal. We got to choose from the Lion, Elephant, Rhino, or Giraffe, or general conservation efforts.

This was an unforgettable experience. I posted pictures from our trek on Facebook, and someone thought we were actually in Africa. While it also felt authentic and adventurous, it also felt very safe. There was plenty of use of harness equipment throughout the tour. While the bridges over the hippos and crocs appeared old and rotten, it was for show. In addition to the harness there was all sorts of netting and ropes which reassured your every step.

We booked a noon tour. I had wanted a morning one, but we were only able to get a deal on the afternoon tours, so we went with the savings. It ended up being fine. We had plenty of time to roam around Animal Kingdom before and after our Trek. We had planned to go to Tusker House directly after for a late lunch, but we were actually full after our tour “snack.” We probably could have just gotten something small and quick elsewhere.

Included in the tour was online PhotoPass access to all photos taken by the tour guides during the tour. They took the time to capture a variety of candid animal shots as well as our own smiling faces while we enjoyed the adventure. We were encouraged to ask if we wanted specific shots during the tour, too. Although the photographs were for us, I’m sure this was for Disney’s benefit too…a ride along photographer sounds better than fishing strewn cameras from the crocodile habitat.  I’m no expert, but I thought the photos were stunning– high resolution and beautifully lit. The Photopass also included access to a collection of stock photography, which was described to us as a “greatest hits” collection of pictures taken by all the guides.

Can you get a similar experience from Kilimanjaro Safari (included with park admission)? No, not really. Disney does a great job of making this feel like an intimate tour, partly by capping tours at a max of 12 guests. You are able to get lots of personal attention from the two tour guides. True a lot of the areas viewed on this tour can be seen on KS. However, on KS you don’t get close to the hippos, you don’t get to cross the super cool bridge that brings you so close to the crocs, and you don’t get the slow, comfortable safari experience that you get on the Wild Africa Trek.

Considering the souvenir items, themed snack, PhotoPass, donation to the DWCF, and overall experience, I think this tour was a good value.

Want a glimpse at more?

Disney Parks Blog has a video showing a snippet of the fun in store on this exotic safari adventure!

Have you taken this tour? How was your experience?