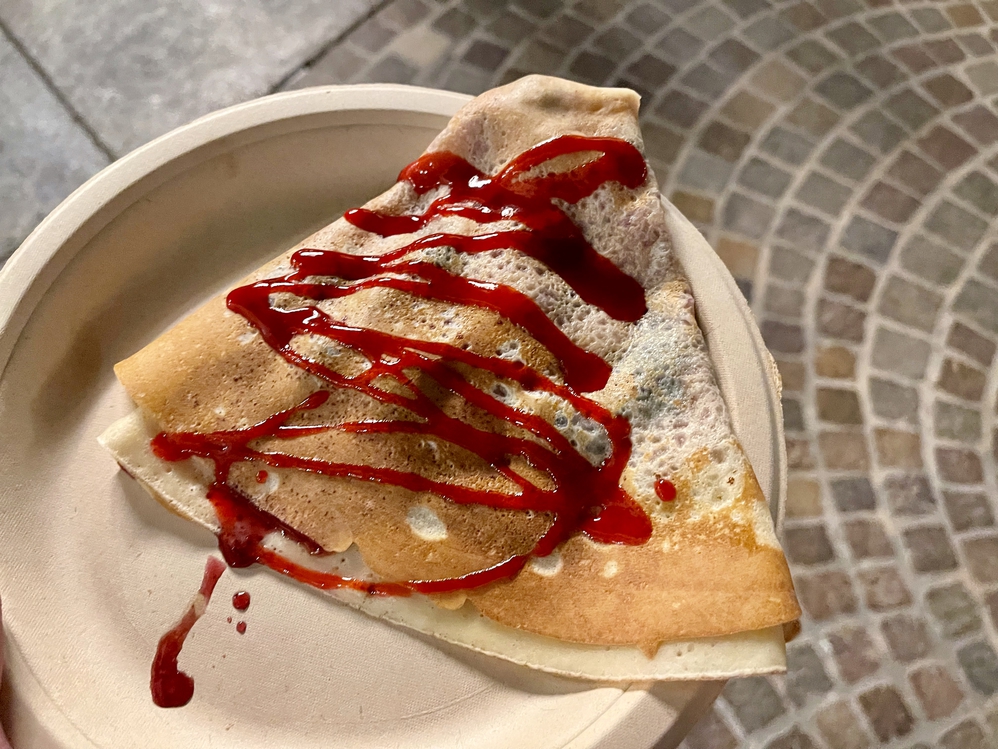 When it comes to EPCOT’s World Showcase, there is no shortage of food to satisfy a park day appetite. You and I will find a seemingly endless variety of culinary nibbles from all over the world. Want to try something new? Let’s swing by the France pavilion’s new Crêpes À Emporter. Allons-y! Let’s go!

I found myself in the France pavilion expansion one evening recently and decided to give the new crêpe walk-up counter, Crêpes À Emporter, a try. I decided to order one of the crêpes, which tend to lean more on the sweet side of things, and one galette, which would be, as you might guess, more on the savory side.

Typically, a crêpe is made from wheat flour, while a galette, as described on Crêpes À Emporter’s menu, is made from buckwheat. As is explained on theculturetrip.com, a galette is France’s answer to pizza, and is typically thought of as the main course. As such, a galette might tend to be larger than a typical crêpe. Such is the case here in EPCOT, though not by too horribly much.

When I stopped by the quick service location, I chose the Bechamel, Cheese and Ham Galette for $10.95 and the Red Berries Crêpe for $7.50. If you have the chance to swing by the counter, it’s good to know that you might need to wait for a few minutes for your order to be ready; keep in mind that the galettes and crêpes are made to order. I like things as hot and fresh as can be, so I was fine with needing to wait five or so minutes.

The Red Berries Crêpe was incredibly good. The berries were fresh and plentiful, and the tartness of the berries contrasted nicely with the sweetness of the sauce that’s used. Those layers of thin, delicate crêpe? Yum. This is a crêpe that I’ll buy again, though it’s important to remember that because it is a thin, folded pancake, the crêpe won’t necessarily fill you up. Which can be a blessing and a curse. The blessing being, of course, that you have plenty of room to try something else. Like a galette…

The Bechamel, Cheese and Ham Galette was indeed savory and filled with plentiful diced ham, a creamy bechamel sauce, and cheese. Enjoy a good grilled ham and cheese? This is your fancy, French version.

I was so glad that I chose to try both a crêpe and a galette because it allowed me to really compare the two. The buckwheat is heartier and tastes akin to whole wheat bread. The bechamel used in the galette is quite good, and that cheese? So creamy.

Overall, I enjoyed both the crêpe and the galette that I tried at Crêpes À Emporter. I’m looking forward to continuing to eat my way through the menu at this quick service location, and I’m curious as to whether or not it’s on the must-do list for your EPCOT day. So much to eat, so little time, right?!

Ps. If you stop by the France pavilion expansion, be sure to take a look at the beautiful blue that covers the exterior of the table service restaurant, La Crêperie de Paris. Galettes hail from the Brittany region of France, and that shade of blue is known as Breton Blue. How cool is that?! 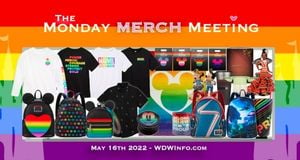 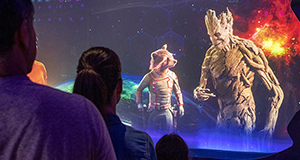 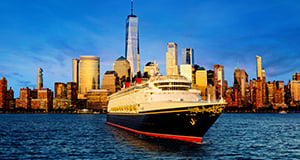