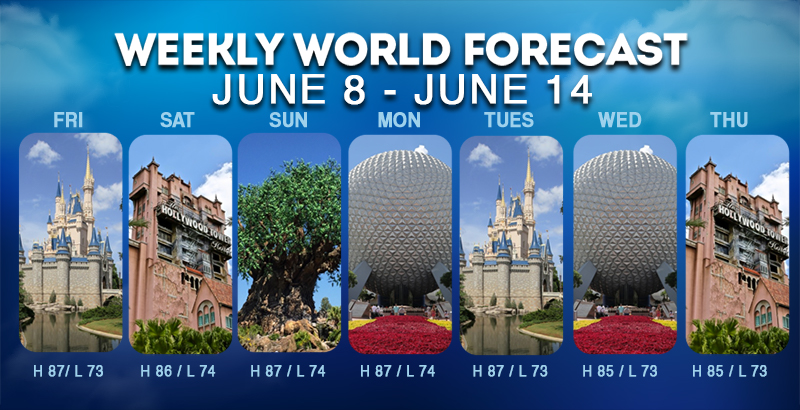 When I was a child, I would sit with my mother and work out the details of our Disney vacations and one of the biggest issues we had after choosing our dates, booking flights, and choosing a resort was deciding which park to visit on which day! We checked the weather, we checked available FastPasses, we checked dining availability and anything else we could think of to figure out in what order to visit the parks. I decided, “I should just share my thoughts with the world on my research,” so I created the Weekly World Forecast.

Friday June 8 – So, last week I claimed there would be a lot of bad weather and there actually was not. My degree is in accounting, not meteorology, and I am just the messenger of this. The weather is apparently going to be bad again this week, but we shall see. This week I would start with Magic Kingdom. The park is open until midnight today and despite the early morning Extra Magic Hours, most people will leave after the fireworks. I just went to Magic Kingdom a few days ago and from the end of the fireworks until park close it was completely dead.

Saturday June 9 – Hollywood Studios is a solid choice for Saturday. If the weather ends up being bad, you should be pretty comfortable with so many indoor attractions. This day will also have the most humidity, so you will be in the sun less, whether that’s from doing indoor rides or just because you’re doing a half day at this park. Either way, you come out ahead. This is also the best day to do Toy Story Mania before it closes for a week, leading up to the opening of Toy Story Land!

Sunday June 10 – Sunday is a good day to do Animal Kingdom. The other parks will have shorter park hours than Animal Kingdom, which I never would have guessed 3 years ago — but here we are! It might be raining off and on throughout the day but you’ll be in line for Flights of Passage anyway, so you’ll probably miss it.

Monday June 11 – Epcot would be a great choice for today because of the weather. There are supposed to be nighttime showers but this shouldn’t affect a lot at Epcot compared to other places. Saturday will also have a low humidity level overall.

Tuesday June 12 – Magic Kingdom has been on a roll lately with staying open very late on weekdays! Tuesday will have a park time of 9 AM to 11 PM. This should be enough time to do everything you could want, but I’ve also checked and found FastPasses available for Peter Pan’s Flight and Seven Dwarfs Mine Train, which is unheard of usually. I am thinking this is going to be a pretty slow day at Magic Kingdom.

Wednesday June 13 –  Wednesday is a great day for Epcot because it will have Extra Magic Hours on both Tuesday and Thursday. If you plan your trip to go right in between these two days, you should avoid all the resort guests that chose Epcot the other days, as well as those choosing Magic Kingdom for it’s 1 AM park closure time for resort guests.

Thursday June 14 – Finishing up the week, I am going to say to go to Hollywood Studios. Toy Story Mania will be closed, but if your trip is already planned, there isn’t much that can be done about this. The major issue is that Toy Story Mania has a long line and those people will now need to go somewhere else, increasing the lines at the other major attractions. The best way to combat this, is to only attend Hollywood Studios on weekdays, as weekends are usually busier at the parks!