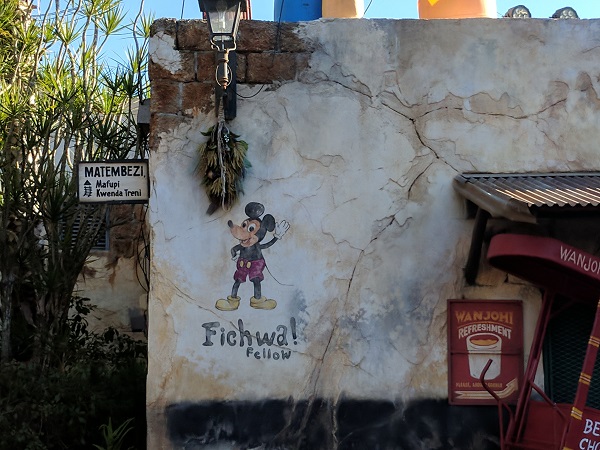 I’m a huge Disney fan. Odds are, if you’re reading this, you are, too. That said, I think we can all admit that there are some weird things that Disney fans love. Let’s jump into the weirdness!

The latest Disney trend is popular walls that people enjoy taking pictures in front of. I haven’t done this, and am not a huge fan of taking pictures of myself and posting them on social media. But plenty of people are. I think that some of the walls make certain color outfits pop. Some of the walls have fun or whimsical patterns or scenes.

The wall that started it all is the infamous Purple Wall in Walt Disney World’s Tomorrowland. This wall is on the right hand side as you enter Tomorrowland, and, if you walk by the dessert party terrace, you’ll pass right by it. This wall can even have a line.

Other popular walls in Disney World include a few in Animal Kingdom’s Harambe. There is one that only cast members have access to and you can’t get to it unless a cast member is willing to take you backstage. Just what cast members need…requests from park guests to take a picture of a wall backstage.

Disneyland got into the game a little bit later than Disney World, but it has a couple of popular self-promotion walls of it’s own. In Disney California Adventure, over in the barren wasteland that encompasses Hollywood Land, there are two photo backdrops: Buzz Lightyear’s wings and the UP house with balloons. Pixar Pier has a couple photogenic walls of its own. A time honored tradition at Walt Disney World is wearing ear hats. Apparently, this all started when the short, Karnival Kid, caused Roy Williams to create basic Mickey Mouse ear hats for the Mickey Mouse Club. Today, there is no end to the styles of ears that you can get: everything from Goofy’s hat to binoculars thrown on top of ears exclusively for Disney Vacation Club members to the fabled rose gold ears. Now, before all the comments start rolling in, I am by no means belittling the Disney ear fashion. I own several pair myself, including my beloved Donald’s behind hat based on the PhilharMagic attraction. But, you have to admit that this is almost exclusively Disney, this wearing of silly ear hats in public. It’s just not something that is done in many other places.

Disney does a great job in theming their lands. Just look at Pandora: it’s amazing, and extremely detailed. They do such a good job, in fact, that even the trash cans in Disney are themed. Park goers love these themed trash cans so much that Disney makes trash can merchandise, including salt and pepper shakers and Christmas ornaments. Bear with me on this one. Disney fans love Disney napkins. How do I know this? Let’s look at the general uproar every time the napkin designs change. Disney fans won’t even accept generic “Disney Parks” on their napkins. They want them to say “Disneyland” or “Walt Disney World” or even “Wilderness Lodge.”

Disney fans love bathrooms. Now, to be fair, these bathrooms have to be themed. It always comes back to the theme. The Tangled bathrooms in the Magic Kingdom are a fan favorite, and they are wonderfully themed to look like the small village from Rapunzel’s kingdom. In Disneyland, people love the Alice in Wonderland-themed bathrooms by the Matterhorn. The doors are painted like cards, and it does look pretty charming. Until you remember that it’s a bathroom.

So, what are your favorite weird things in Disney parks?