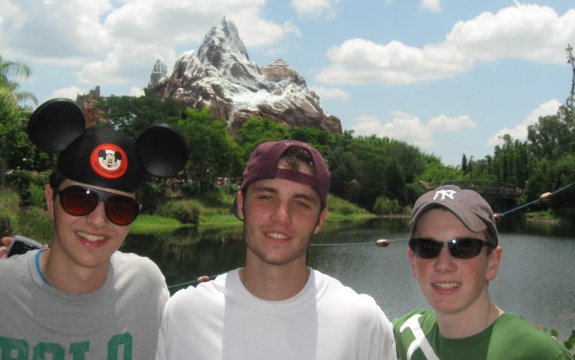 This story starts in 2009. I was a junior in high school, and I was fortunate enough to go on a weekend-long field trip to Walt Disney World for a business and marketing class. During this trip, I heard talks of the Disney College Program and it peaked my interest. When I returned home from my trip, I immediately starting googling everything I could about this program. I soon learned it was a living, learning, and working experience where college students are given the opportunity to work at Walt Disney World. It suddenly became a dream of mine that I never knew I had. A year later in 2010, I graduated high school and to celebrate, there was only one place I wanted to go. I convinced some of my best friends that we should save up and head down to the most magical place on earth. This was the first Disney trip where I had ever been in charge of planning and budgeting. Once the trip was all planned, we got on the plane without any parents and shipped off to Walt Disney World. I can distinctly remember walking through the Orlando International Airport thinking about how we made it here without the help of our parents. This moment of clarity really made me feel confident. That entire week was an experience where I felt a maturity I had never felt before. In a weird way, I started growing up in the place most people relive their childhood.

After that trip, and after the summer was over, I started my first year at Penn State University. I was very unclear with what I wanted to do with my life. I hadn’t decided what I was going to major in, and I really struggled with what my purpose was, but one thing that was very clear was that I was going to do the Disney College Program, come hell or high water. Also around this time, I found that Disney was extremely strict with their underage drinking policy. Essentially if you are caught drinking under the age of 21, or even if your roommates’ alcohol was found in your apartment, you could get terminated from your program. With this in mind, I decided I would wait until I was over 21 to apply for the Disney College Program. Not because I was a big drinker, but because it seemed like it would be a really easy way to get sent home, and that just wasn’t worth it. The Disney College Program was something I had been dreaming about, and I didn’t want something like that to get in the way. It was time to start the interview process. I had done fairly well answering all the online questions I needed to answer, but eventually, I had to face the phone interview. This was something I had heard about due to John Henselmeier, and some other YouTubers’ videos. I was extremely nervous. I can still remember tapping my foot like I was an anxious rabbit throughout the entire interview, I was drenched in nervous sweat, and throughout it all, I was trying to sound like the friendliest Disney version of myself. Finally, the interview was over, and I thought I did pretty well, but because it meant so much to me, I was extremely fearful. This opportunity was something I wanted so badly, and I really needed that time to figure out my life. I knew that escape to Walt Disney World would give me that time, and clarity, so this was important to me.

On October 1st, 2012, I was casually checking my emails when I saw that I’d received something from the Disney College Program. I immediately knew that it was going to be great news or horrible news. I opened the email and saw…”Congratulations!” Choose to believe more or not, but this next part is 100% true, and I am not ashamed to admit it. I literally leaped out of my chair, and celebratory punched the air like a freeze frame at the end of a movie from the 1980s. I then proceeded to run to class high-fiving strangers telling them I just got great news! This moment was probably very confusing for these people, but frankly, I didn’t care.

The fall semester of my junior year at Penn State came to an end and it was now time for me to start my journey to Walt Disney World. The experience was life-changing. It was everything I was hoping it would be and more. I’ve talked before about my experiences during the college program. To see that story click HERE!