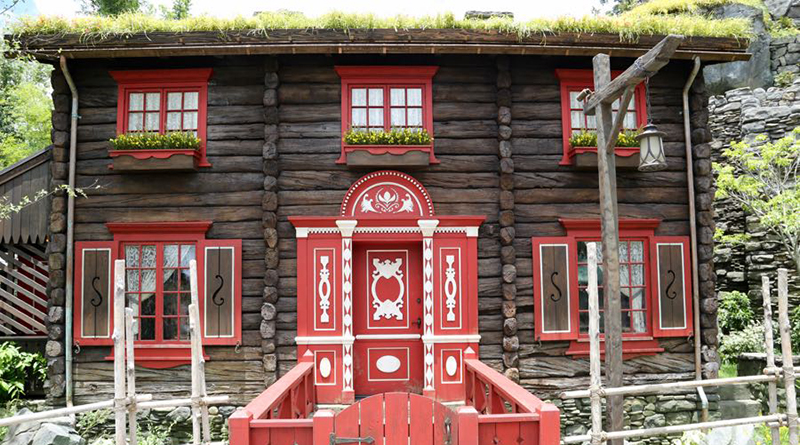 You are not the first to pass this way. Nor shall you be the last. Those who seek the spirit of Norway face peril and adventure—but more often, find beauty and charm. The Norway Pavilion at Epcot opened in 1988. It is the newest World Showcase pavilion.

The pavilion was designed to mimic a small Norwegian village. The architecture of the pavilion pulls from several Norse towns: Bergen, Alesund, Oslo and Setesda. Norway used to make payments to sponsor the pavilion, but they stopped paying in 2002, so now Disney completely owns the pavilion. The first thing you’ll notice is the focal point of this pavilion, the large Stave church that welcomes people to Norway. A Stave church was common in North Western Europe during medieval times. They were made out of wood and there used to be thousands of these churches in Europe. Today there are only 28 left standing in Norway. Epcot’s Stave church is a 4/5 scale replica of the Gol Stave Church.

Inside the pavilion’s Stave church is an exhibit on the making of the Disney animated movie Frozen.

As you pass the Stave church on the right you’ll come across Akershus, the princess dining restaurant. The building’s design is based off the Akershus Fortress or Castle in Oslo. The three-sided face atop the doorway of the Fjording, King Olav Haraldsson, helped to turn many in the nation towards Christianity. He had harsh methods of conversion, but when he was killed at the Battle of Stiklestad his death played a large role in the nation’s conversion. His face has three sides to represent the father, the son and the holy ghost. Maelstrom was the Norway pavilion’s original attraction from 1988 –October 2014. The slow-loading boat ride involved a ride through Norway’s past that included Vikings, polar bears, mischievous trolls and an oil rig. There was a movie at the end of the attraction called The Spirit of Norway.

Frozen Ever After took over for Maelstrom in June 2016. This new attraction features a musical ride through Anna and Elsa’s story. The queue is indoors and features a nighttime glimpse into Arrendele’s castle courtyard.  Non-fastpass guests will also walk through an extra scene featuring Oaken’s Tokens, the new shop of Wandering Oaken. Though Frozen Ever After took Maelstrom‘s place, the new attraction is a full 30 seconds longer because of the consolidation of the loading and unloading stations.  The ‘Let it Go’ scene allows guests to linger a little longer than they would otherwise, because this is where the boat changes tracks to travel backwards. The animatronic figures inside this ride feature the new micro-projectors that map content to a mold of the Character’s head. This provides for heightened facial expressions, like the dwarfs in the new Seven Dwarfs Mine Train attraction. Frozen Ever After features a brand new form of audio-animatronics which are all-electric. These are supposed to have increased fluidity. Norway has a lot of interconnected stores. These stores are all named after animals because Norwegians have close ties to nature and animals. There is the Puffin’s Roost, the Wandering Reindeer and the Fjording (a small horse). There is a lot of interesting merchandise that is imported from Norway, like Helly Hansen clothes and accessories, and Laila perfume. You’ll find a lot of troll influenced merchandise, as well as Viking helmets and play swords. It wouldn’t be Norway if there weren’t rooms full of Frozen merchandise (right?!). Dresses, artwork, stuffed toys, dolls, and themed magic bands are all available.

Norway entertains its guests by way of 2 roaming Viking characters. These guys are highly entertaining and are available for pictures or general mayhem. Anna and Elsa’s Royal Sommerhus is based off an actual cabin built in 1817 called Detli House in Trondheim, Norway. Inside this decorative cabin, guests can meet Anna and Elsa. While you’re in line, look for some callbacks to the lost Maelstrom ride. Kringla Bakeri og Kafe is a fan favorite. This Norwegian bakery serves sweet pretzels, pastry horns, flatbread and the ever-popular school bread. Or you can treat yourself to my personal favorite, Viking coffee.

Akershus Royal Banquet Hall is Norway’s table service restaurant. It is a princess Character buffet. You’ll receive a photo with Belle at the entryway and inside you’ll find a random assortment of other princesses including Ariel, Jasmine, Snow White, Aurora and Cinderella.

You may have noticed that the Kringla bakery has a sod roof. This type of roof was common in Scandinavian cultures on rural log houses. A sod roof is used to reduce storm water runoff and trap heat inside.

Trolls are used in Norway as children’s bedtime stories, told to frighten the children into behaving. You can find them all over the pavilion, hiding in windows, available to purchase in the gift shop and ready to pose with you for a picture.

Save Up to 20% On Rooms at Select Disney Resort Hotels Now Through Spring! For arrivals most nights now through April 25, 2020. Book by March 7, 2020
More Information | Get a Quote