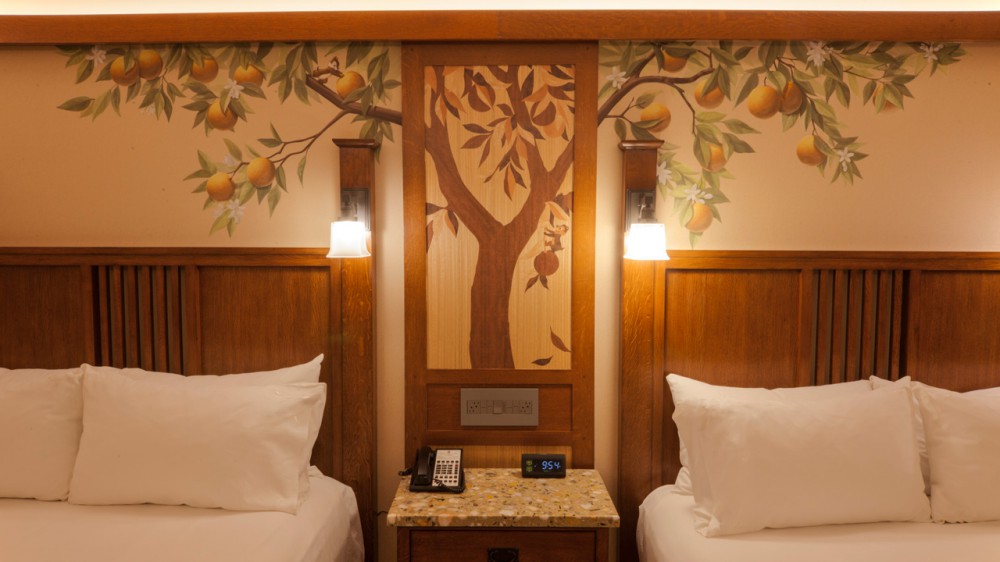 The renovations are still in full-swing at Disney’s Grand Californian Hotel & Spa at the Disneyland Resort, but the first phase of the updated hotel rooms are complete and ready for guests.

Last month, the Disney Parks Blog gave us a sneak-peak at the rooms, but now that some of the rooms are finished, they are offering another look. The Craftsman-style headboards are made from oak and frame an orange tree mural, complete with Chip ‘n Dale hiding in the branches. In rooms featuring a sleeper bed, there is hidden artwork of Bambi and other woodland creatures. Some of the art in the rooms pays homage, not only to the orange groves which grew where Disneyland now stands, but also to the Dominguez family that lived on those groves and the Silver Lake neighborhood where Walt Disney built his original animation studio. While the rooms feature other Craftsman touches such as copper detailing near the coffee bar and green glass from wine bottles in the countertops, they also offer up-to-date technology, including a 55-inch smart TV, built-in USB charges, and Keurig coffee makers.

Renovations at the Grand Californian are expected to continue through the end of 2017.