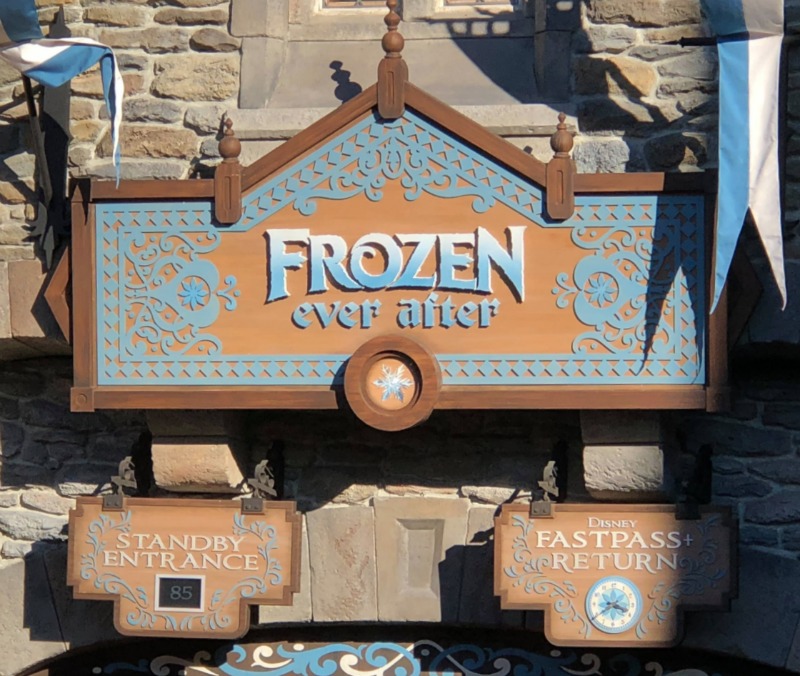 Ever since Disney’s animated Frozen arrived in theatres back in November of 2013, it has been more popular than anyone, including Disney, could’ve ever predicted.

Not too long after the film was released, Walt Disney World started adding Frozen to the theme parks, beginning with Frozen Summer Fun LIVE! in the summer of 2014 which included Anna and Elsa’s Royal Welcome, the “Coolest Summer Ever” Dance Party, the “Frozen” Fireworks Spectacular, and much more. You can still catch For the First Time in Forever: A Frozen Sing-Along Celebration at Disney’s Hollywood Studios.

You may remember the bitterness that ensued when the Maelstrom attraction in the Norway pavilion at Epcot was transformed into Frozen Ever After. The Royal Sommerhus was also added because the Anna and Elsa meet-and-greet was so incredibly popular at Princess Fairytale Hall in Magic Kingdom that they needed to move it to its own unique location with a substantial queue (to contain the lines that would extend upwards of six hours or more on some occasions). I will admit that I wasn’t over-the-top crazy for Frozen Ever After, but I had the same feeling about Maelstrom, so it wasn’t the biggest deal ever for me. A boat ride in air conditioning is always a good thing on a hot day at Epcot though, so I’ll take it! Then came Frozen – Live at the Hyperion at Disney California Adventure Park which replaced Aladdin, and Arendelle was added to the Story Book Land attraction at Disneyland Park.

When ‘A Frozen Holiday Wish‘ was added to Magic Kingdom during the 2014 holiday season, Disney fans all over the world collectively lost their minds. What had previously been the Fairy Godmother magically draping Cinderella Castle with a beautiful layer of shimmering lights became Elsa using her magical powers to transform the Castle into an icy palace with the help of Anna, Kristoff, and Olaf.

Disney Cruise Line added Frozen-themed dining, activities, and deck parties to select sailings and Adventures by Disney even incorporated a visit to a storybook village (in their Norway itinerary) which served as the inspiration for Arendelle, the kingdom and home to Anna and her sister Elsa. I’m obviously not including all of the ways Frozen has been incorporated into the Disney theme parks, and I may not have listed them in the order that they were added either. So many Disney fans were feeling the Frozen burnout, but more and more Frozen kept being added and Broadway decided to get in on the action too.

Just last week, the first preview of Disney Theatrical’s new Broadway musical Frozen made its debut and Princess dresses were an equal-opportunity premise for grownups, teenagers, and toddlers alike.

The Los Angeles Times chatted with many Frozen fans that were excitedly waiting to see the show.

“Yuki Kunishi, an accountant who lives in the city, arrived in an Elsa dress accompanied by her boyfriend, Charlie Omacer. The pair had been waiting since August for Disney to announce the sale of tickets. Kunishi has lost count of how many times she has seen the Oscar-winning 2013 film about a queen who accidentally plunges her kingdom into eternal winter and the sister who braves a perilous, icy mountain to save her. ‘It’s all magical, fantastical,’ Kunishi said, adding that her own first name means ‘snow’ in Japanese. Omacer said he’s always ‘liked the Disney stuff,’ but after he started dating Kunishi three years ago, it became mandatory.”

Larissa McKay stood with her mom, both from Ottawa, Canada. They mentioned that they’d just seen Hamilton and The Band but were thrilled to have scored tickets for Frozen. McKay said she can relate to Anna because “she’s quirky and she makes mistakes too.” I feel like most of us can relate to that last part. Once the show was over, a voice in the crowd reportedly shouted, “Can that start all over again?”

So, as it turns out, there are still many, many fans of all the different ways they can get their Frozen on and thank goodness, there is a “Flurry of Frozen Fun” all year long at the Walt Disney World Resort!