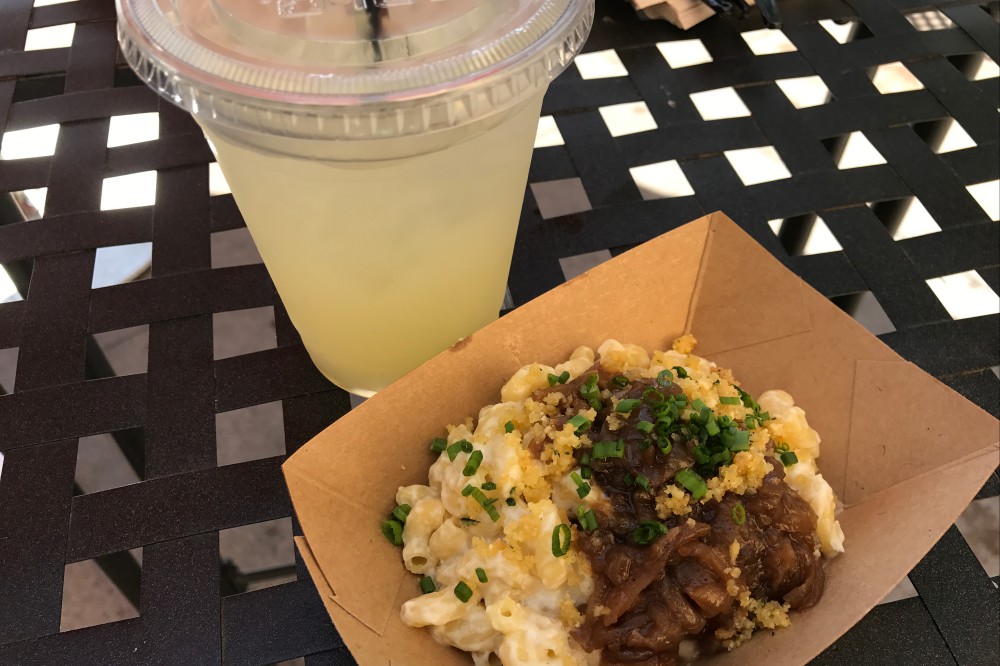 The DIS Unplugged: Disneyland Edition team spent the first weekend of the California Adventure Food & Wine Festival hitting nearly every booth available…for research.  I’ve already talked about Day 1, so now it’s time to review what we did on Day 2. On Saturday (Day 2), I was joined by Tony and his son Andrew to finish up the rest of the booths. We encountered a few booths that were out of one item or another when we visited, so (spoiler alert), we didn’t make it to them all.

Our first stop was going to be Nuts About Cheese, but they were out of…cheese, so we moved on to The Onion Lair. There we picked up the French onion mac & cheese topped with parmesan crumble and chives [$7.25], the Braised Wagyu beef on creamy polenta with haricot vert and red onion salad and roasted onion [$7.75], and the Chocolate-hazelnut and raspberry Feuillete tart.

As we experienced the previous day, the mac & cheese itself was pretty basic, but it was topped with what’s left in your bowl of French Onion soup after you eat the crouton and broth.  It wasn’t bad, just a little pricey.  Speaking of pricey….the Wagyu beef was very disappointing, from the small portion of beef that was served to the awful polenta. Plus, the onion in the dish seemed like an afterthought.  Thankfully there was no onion in the dessert, which was good, but very basic and something you could get anywhere.

Things had to get better, so we headed to Sweet & Sourdough. It’s California…they can’t mess that up, right? For the price, the shrimp salad wasn’t too bad.  There were five good size shrimp with nice sauce, but not too much to the salad. The soup was kind of disappointing.  Upon further review….we were missing the “topped with bacon,” which, given the need for salt in this dish, could’ve help.  Still, not a bad value for $6. The bread-pudding-in-a-muffin-tin was good, but could’ve used a little more sweetness or more of the vanilla sauce.

We were still determined to find that perfect dish, so we headed to Olive Us.  Unfortunately, they were out of one of the dishes, so we kept walking and found ourselves back at Nuts About Cheese. Everything was available this time around, so that’s what we got: the Brie toast with fig and mint and roasted California almond crumble [$5.00], the Baked ham and Swiss cheese croque monsieur roll with smoked pistachios [$7.00], and the Chevre fromage blanc tartine infused with rosemary and honey topped with toasted hazelnuts [$4.50].

We were really looking forward to the croque monsieur roll, but while it was a bigger portion than I was expecting, it was just good. I will give it another chance though.  The big surprises came in the other two dishes, which we weren’t expecting to like. The creamy brie with fig on a soft piece of sourdough bread was perfect, and the “dessert” turned out to be everyone’s favorite. It was a small portion, but so rich you didn’t need much more.

With our newfound confidence, we headed across to Hollywood Land where we found the LA Style booth. Unfortunately we ended on a down note.  The slider was good, but overly sweet with both teriyaki and pineapple.  We didn’t taste any spice at all in the pineapple jam, which would’ve helped the dish.  The tacos had good flavor, but the meat was very tough.  When the menu said “short rib”, we were expecting the fall-off-the-bone short rib we’re used to.  This may have been the short rib meat, but the preparation didn’t help the dish. The dessert was awful, with too many flavors going on.  The dish not only had lemon, strawberry and vanilla, but for some reason we picked up a hint of mint…not a pleasant surprise.

We never did make it back to the Olive Us booth, but Tony and Andrew did hit up the special menu at the Paradise Garden Grill later in the day. Listen to this week’s podcast for their thoughts on that. I survived the first weekend of the Festival and can’t wait to get back there to have some of my favorites again.  The California Adventure Food & Wine Festival continues through April 16th.