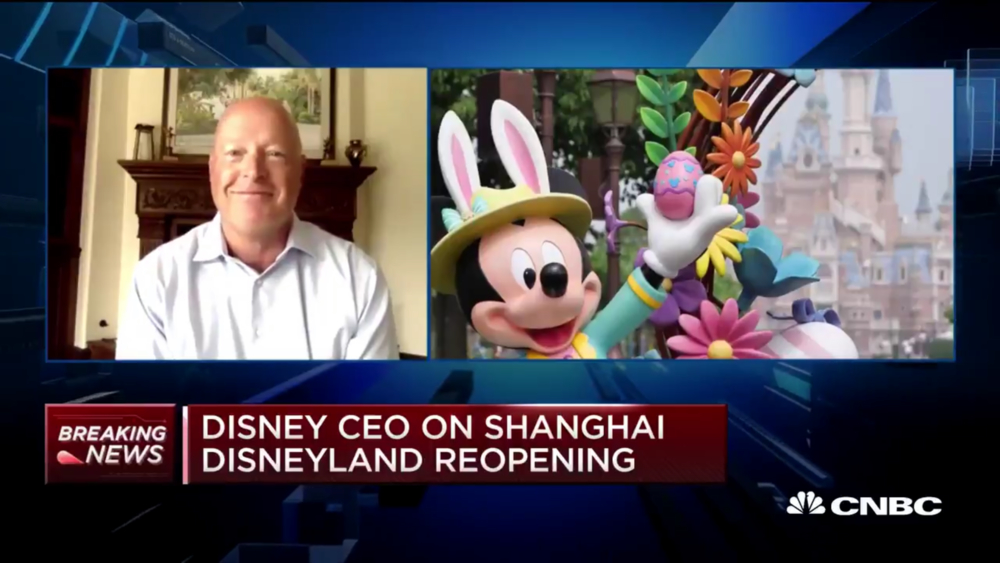 In a CNBC interview posted today, Disney CEO Bob Chapek shared his thoughts regarding the reopening of Shanghai Disneyland and any potential safety measures that could be seen in the stateside Disney parks.

Chapek, when referring to the correspondence that he has received from Disney fans regarding their anticipation of the Disney parks reopening, said that “…we certainly want to open up as soon as we can across the world, but we’re going to do so in a responsible way…”. Chapek also expressed a desire to get Disney cast members back to work. He said that Disney is “very encouraged” by what they have seen from the reopening of Shanghai Disneyland.

Chapek said that they will be using a “stair step” method as they move forward during Shanghai Disneyland’s reopening phase, and that the goal is to increase the park’s attendance limit each week by 5,000 guests.

When asked for thoughts regarding a possible timeline for reopening the Disney parks located in the United States, as well as those in Hong Kong and Tokyo, Chapek said that Disney will not comment on a certain date, and that guidance from both local and federal government, in addition to those in the healthcare field, will be important in the decision. Chapek believes that the May 20th reopening of Disney Springs is “a good sign.” After commenting on the excellent adherence to standards by both cast members and guests in Shanghai Disneyland’s Disneytown reopening phase, Chapek expressed that his hope is that the same will occur in Disney Springs, that he is hopeful that “this will be the beginning of a great new rebirth of Disney parks.”

Toward the end of the interview, when asked what the key will be to reopening the stateside parks, Chapek said that in addition to social distancing, face masks will be likely required for both cast members and guests.

“We’re very encouraged by what we see in Shanghai.” Disney CEO Bob Chapek says the company will be “very conservative” as it reopens its theme parks. https://t.co/OPGAPam4Gh pic.twitter.com/sFydyCzQhX