The new tea experience opened at Steakhouse 55 at the Disneyland Hotel, on Friday, 22 January, and I was able to make reservations for the following Sunday with my son, Nick, and his girlfriend, Yasmin.  The tea is offered between 12:00noon and 3:00pm on Fridays, Saturdays, and Sundays.  Our reservation was for 12:00noon on Sunday.

We arrived at Steakhouse 55 a little early, and though we were able to check in, they did not start seating anyone until noon.  That was okay since we were able to relax in the nice lounge right outside the restaurant. Lounge in front of Steakhouse 55

At noon, various servers began seating each party one at a time.  When it was our turn we were led into the restaurant and to our booth.  There were several servers around, but not too many people.  Before long though, the restaurant was quite full. Our host hands Nick a menu

There are two offerings for adults and also an offering for children.  We decided to try the Premium Tea Party, which in addition to the Classic Tea Party offerings, includes sparkling wine, salad, and truffles to take home after the tea.  Our host gave us our menus to look over, and then our server, Lupe, came to the table to take our order and answer any questions we had about the teas.  Nick ordered the Organic Peppermint Leaves, Yasmin ordered the Chakra Silver Tips, and I ordered the Redbush Caramel Velvet, which I really enjoyed. Our teas came while we were enjoying the salads. Since they brew the teas fresh we did have to wait a little bit, but it really wasn’t long.  The tea service also included various sugars, honey, and lemon.  I thought the sugar crystals on a stirring stick were a nice touch. They also brought the condiments for the scones, which included Devonshire cream, blueberry preserves, and lemon curd. The servers were very attentive without being intrusive, which I appreciated.  We learned that Chef Marcel put together the tea service, and that everything is made fresh. Soon our tiered plates came with our food.  Each tier is set up for one or two guests, so we had two of these.  The bottom tier has the desserts, which included chocolate covered strawberries, fruit tart, and a couple of macarons for each person.  The middle tier has four finger sandwich offerings for each person: cucumber and watercress, salmon gravlax, deviled cage free egg salad, and heirloom tomato and mozzarella.  The top tier has two scones for each person.  Nick and Yasmin went immediately for a scone, while I started on my sandwiches.  I’ve been to a few teas, and thought these sandwiches were on par with the other restaurants.  I really liked the cucumber and watercress and tomato and mozzarella, though they were all tasty.  The scones were really good, too. One had a light glaze on it.  I had no problem spreading the cream, preserves and curd all at once on the scones.  Although we shared the condiments, we had enough and didn’t need to ask for more.  After polishing off the salad, sandwiches, and scones, we started on our desserts.  It was all good, and the macarons were delicious.  They had a variety of flavors.  Everything was so fresh. Since our server, Lupe, told us we could try different teas, Yasmin asked for some of the Mountain Berry iced tea.  Lupe brought two glasses and a small carafe.  I wanted more hot tea and asked her to surprise us, so she ended up bringing Eros.  Again, since the teas are brewed fresh it took a few minutes, but we were enjoying our conversation, plus we chatted with some of the servers and the time flew by.  I will say that the Eros tea was really good, but my favorite was the Redbush Caramel Velvet.  I can still taste it.  I also tasted the iced tea, and that was deliciously refreshing. If you like iced tea I do recommend this one. By the time we finished, it was 2:45, so we definitely took our time to enjoy our tea. Like I said earlier, there were plenty of servers who were not intrusive, but they were so nice, and ready to answer any of our questions.  Our water glasses were constantly topped off, and they removed plates as we finished using them.  It was definitely top notch service. All three of us enjoyed our tea, and I would do it again.  I recommend this tea for a nice alternative when visiting the resort if you’re looking for a different type of experience, or if you would like to celebrate an event.  At this time, the tea is supposed to run through the end of March, however, if it remains as a popular afternoon pastime, word is that they may extend it.  The Classic Tea is $50, the Premium Tea is $65, and the Children’s tea is $35 ~ all per person.  Annual pass discounts are honored for 15% off of the total.  To make reservations you can call (714) 781-3643, option 4; or reserve online:  https://disneyland.disney.go.com/dining/disneyland-hotel/afternoon-tea/. Nick and Yasmin at Steakhouse 55 While at the tea I did a short Periscope (Live on-line video) that you can see by clicking on this link:  Periscope Tea Video. 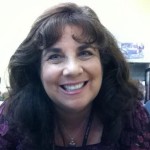