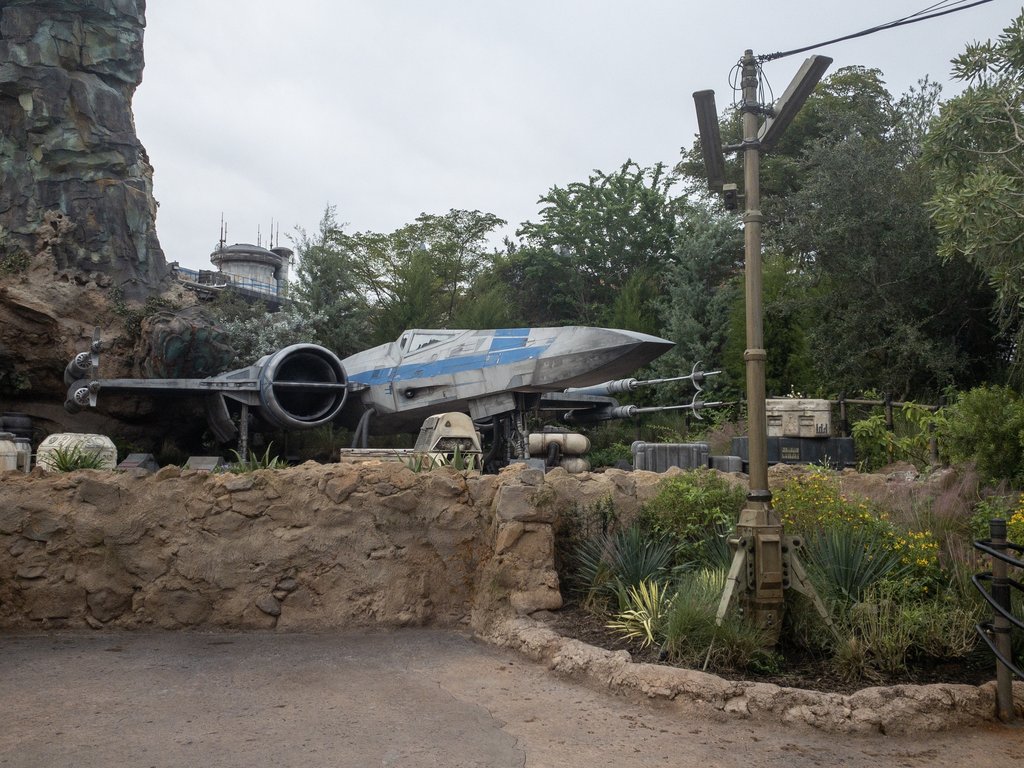 Welcome to the November edition of Disney Rumor Round Up for 2019! You can check out the October 2019 installment here. We are getting into the thick of the holiday season! Rumors do tend slow down a bit during this period, but we still have some new things to share. Disclaimer: Any rumors mentioned in this article are not confirmed by Disney, and may not ever happen. 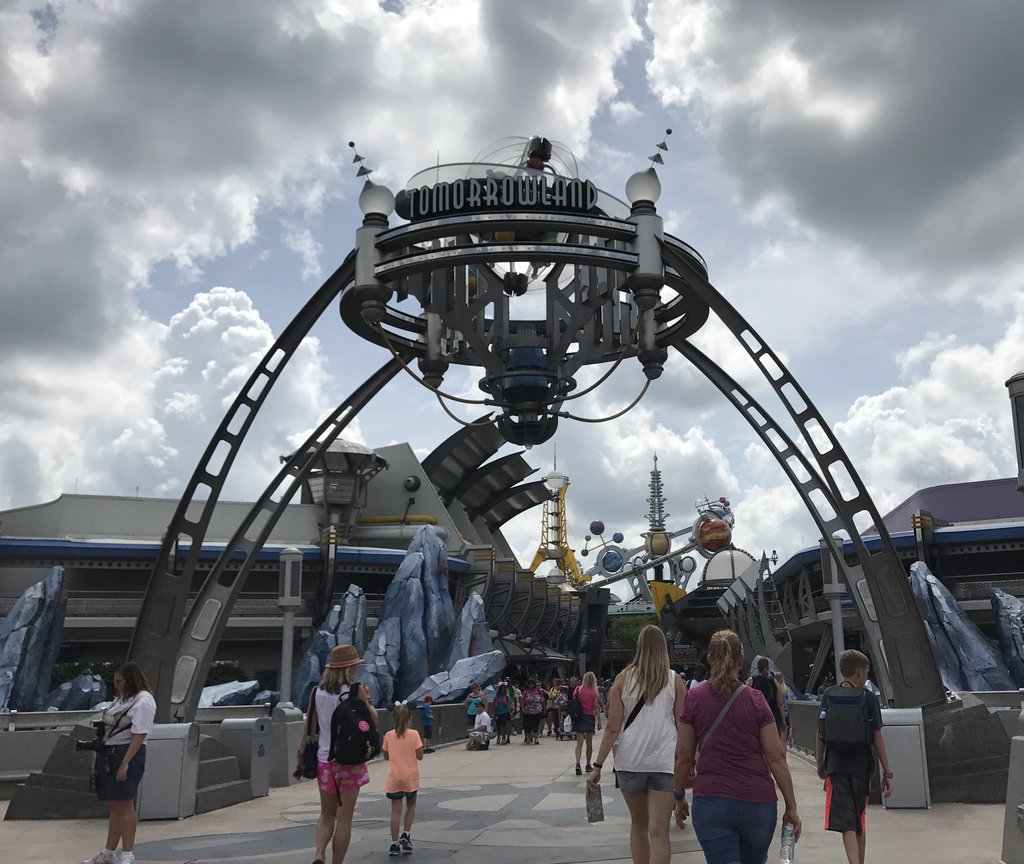 It is a slow and steady progress, but the older steampunk metal decor throughout Tomorrowland continues to come down. New scrims and scaffolding has been added near the entrance of Tomorrowland for this. All of this work should be done in time for the 50th anniversary. 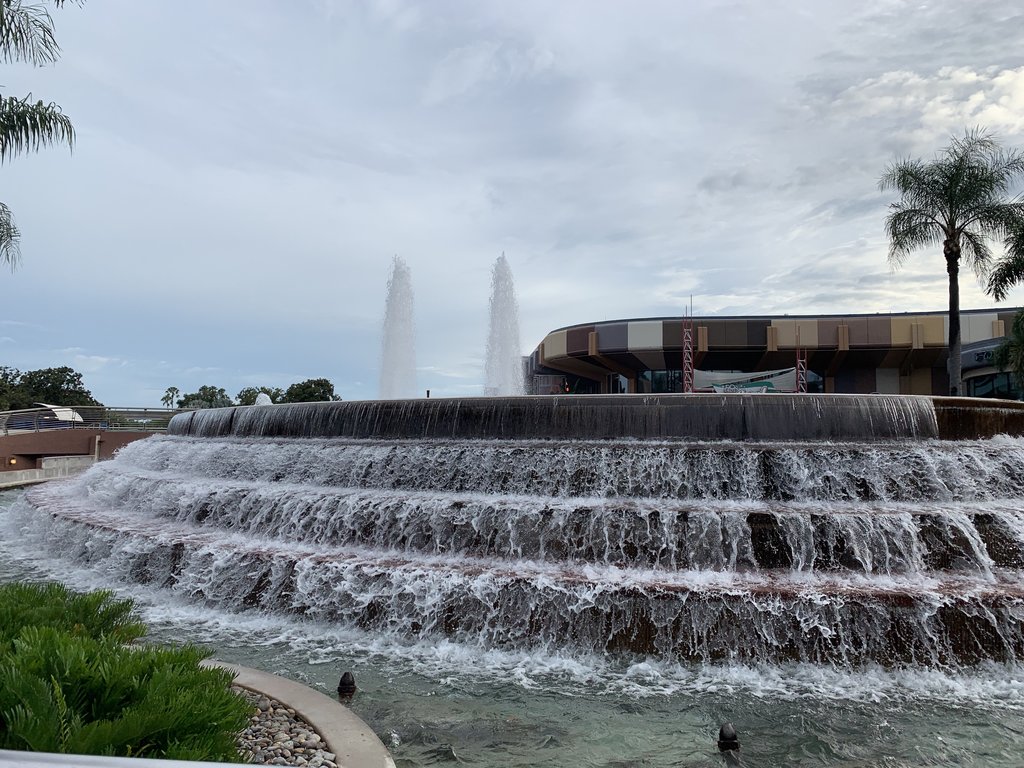 Epcot will continue to be a major construction zone for the next few years. With that, it is likely it will continue to get worse before it gets better. Entrance work continues as the new security area is now open, getting rid of the double security check point for those who take the monorail from the Magic Kingdom. Near the Seas pavilion, sections of concrete have been poured for new walkways. Some speculate it could be for temporary entrance walkways while other areas are being worked on. 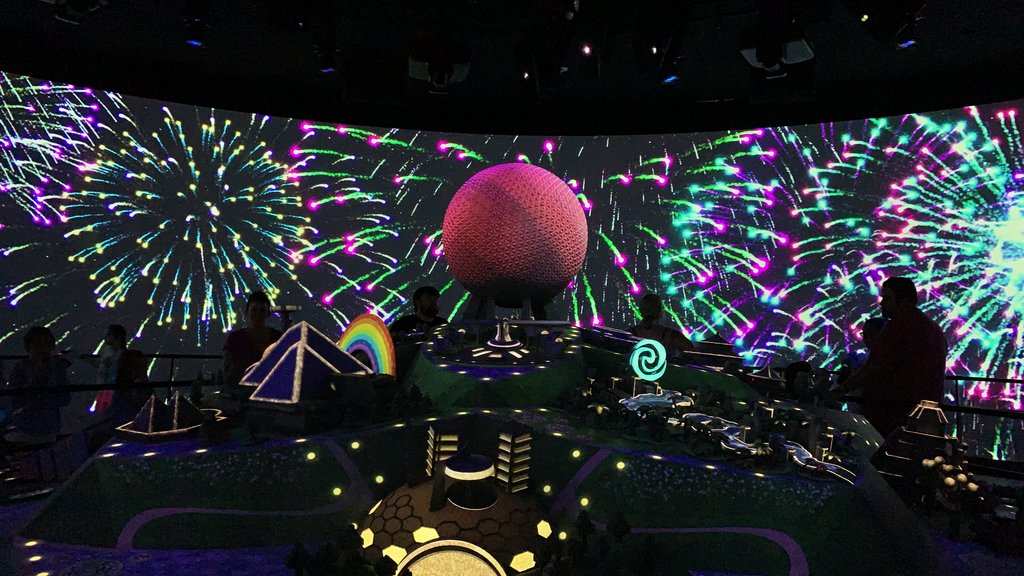 Epcot Forever has received some mixed reviews, but is more or less a temporary test bed for the future of nighttime entertainment at Epcot. The beloved torches from Illuminations are said to be staying. The new, higher level pyro is intended to give different fireworks views, especially for newer resorts such as Riviera Resort or Gran Destino Tower at Disney’s Coronado Springs. In addition to that, there will be no holiday tag for this year’s holiday season. 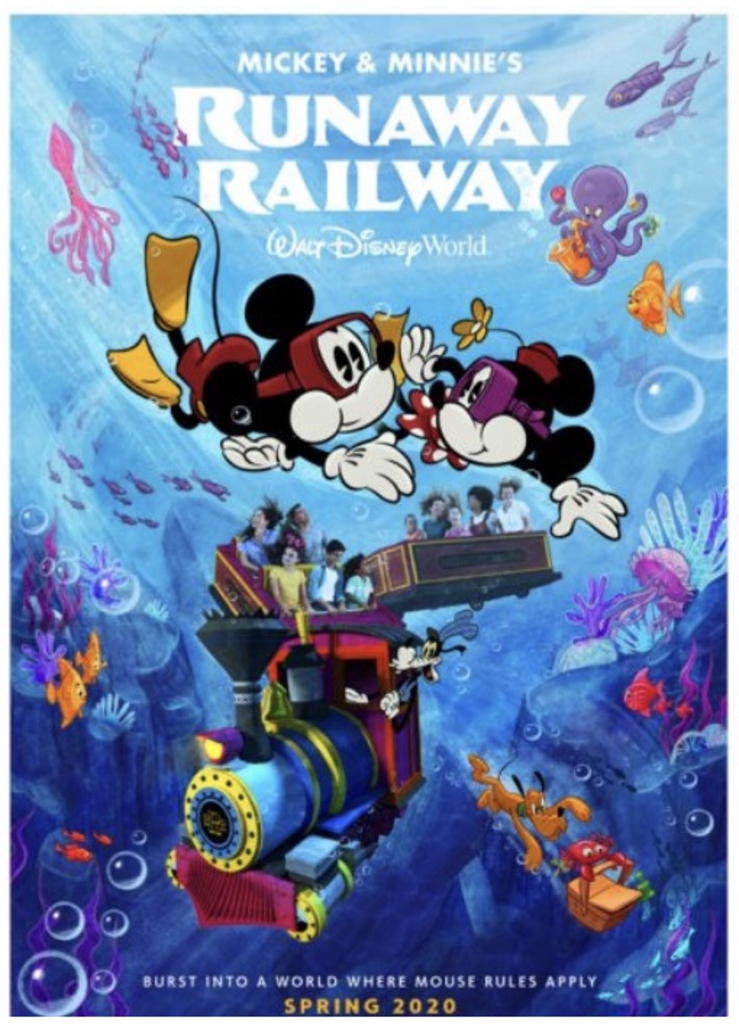 Mickey and Minnie’s Runaway Railway remains on pace to open in the Spring/Summer timeframe next year. Reportedly, cast members can start applying for transfers to the new attraction in December of this year, which means things are progressing well.

All focus is on Rise of the Resistance, which, at this point, opens in a matter of days. New advertising has surfaced, and full rumored run-downs of the attraction have popped up on wdwmagic.com. You may want to skip some of this if you don’t want to spoil the attraction.

There are several technologies in play with this new attraction, including several ride systems. You will see multiple animatronics in this attraction, from Stormtroopers to Finn and Kylo Ren. Some of these figures are not full animatronics, but rather figures to give you the illusion that they are. Realistic laser blasts are actually large scale fans with LEDs to give a realistic feel. The finale also includes a thrilling drop, which adds another level to this attraction not seen in many others.

The opening is planned for invited guests and media on December 4th. Disney is planning a major opening event. BlogMickey shared reported leaked images of large SUV-sized drones that are shaped like X-Wing fighters. This would be similar to the infamous New Fantasyland dragon that flew over Fantasyland for opening events. This is likely a one time thing for the opening event due to possible liabilities and flight restrictions of Walt Disney World.

Not much happening on the Animal Kingdom front. Disney is reportedly exploring options for the next Animal Kingdom addition, but that is years away. Pandora, DinoLand U.S.A., and an unnamed third option are being looked at as a possible expansion, according to wdwmagic sources. 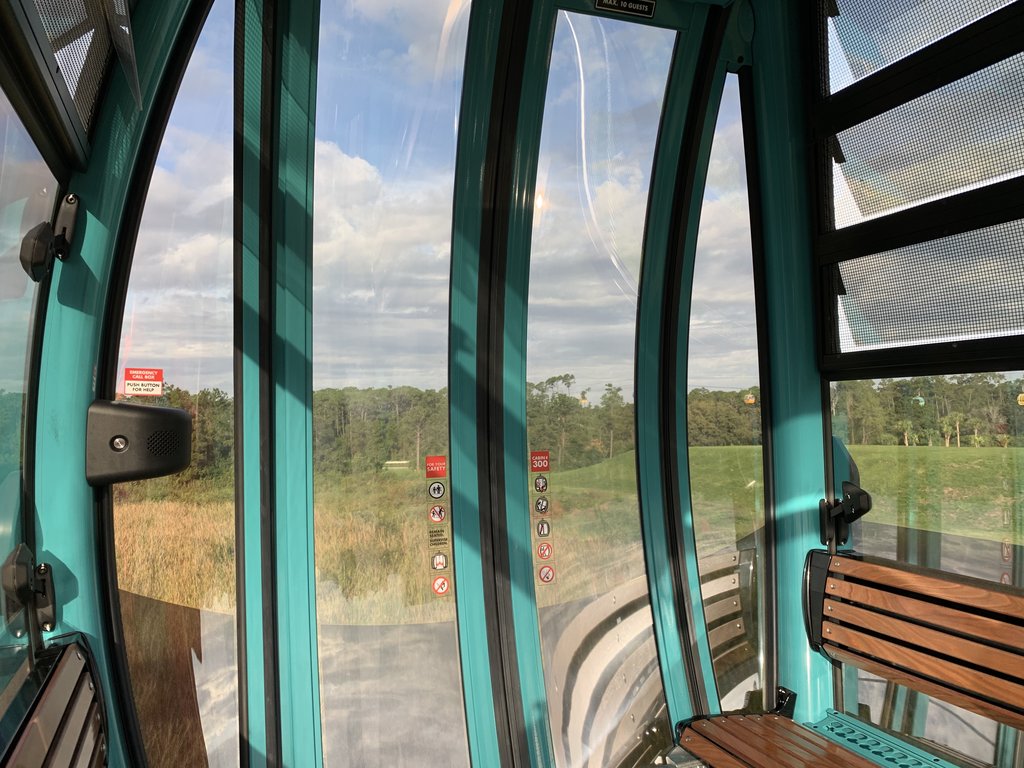 Rumors have circulated that Disney has put in an order with Bombardier for a new fleet of monorails. It is believed that this unnamed order is instead for Las Vegas, which is expanding their monorail system. Disney does need to upgrade their monorail fleet, but this would likely cost several hundred million dollars to do so, and Disney has shown they are refurbing the interiors of their current monorail fleet as the refurbed monorail green and silver have already debuted.

Walt Disney Imagineering has gone through a bit of restructuring. A new position that will focus on design and delivery has been created in hopes to help deliver Imagineering products on time, as many project schedules have slipped in recent years. Famous Imagineers, such as Scott Trowbridge, will now add Disneyland and Disney California Adventure to his job description, in addition to remaining the Star Wars creative executive for Imagineering. Chris Beatty, of New Fantasyland and Galaxy’s Edge fame, will be creative executive for Magic Kingdom and Hollywood Studios. Zach Riddley and Tom Fitzgerald lead the Epcot overhaul project, and Fitzgerald also is lead creative for both parks in Paris.

Dopplemayr unveiled its latest gondola cabin model, the Omega V. This cabin has options for onboard air conditioning and offers a sleek new design with additional onboard lighting and seating options. Disney won’t be upgrading anytime soon, but this could be an option for any future expansion Disney may do with the Skyliner. 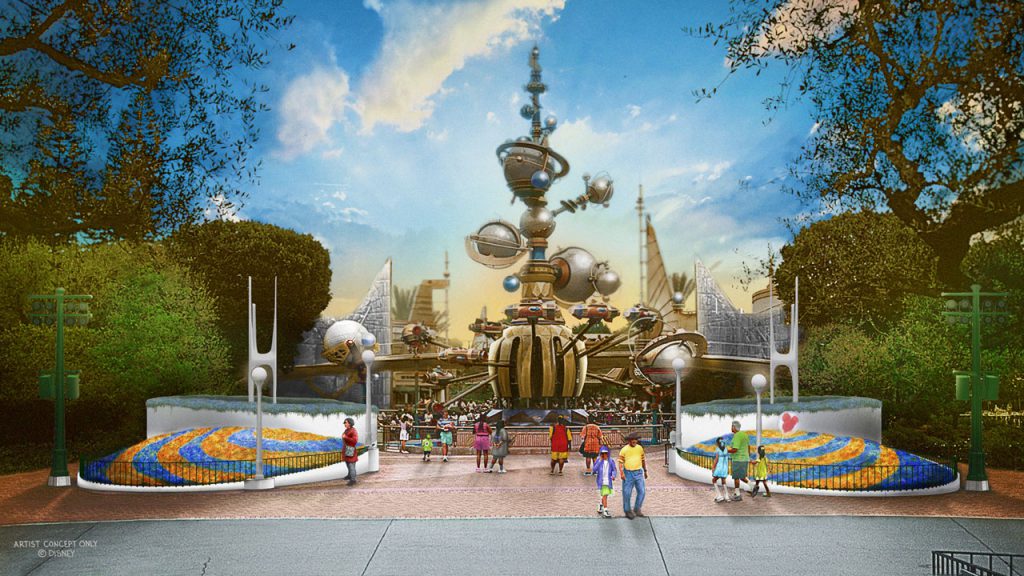 Disneyland also released new concept art for a reimagined entrance to Tomorrowland. This area of the park has been a bottleneck for years, and many Disneyland fans wanted things to change. This change does show a brand new entrance, but the Astro Orbiter and the Peoplemover tracks look to remain in this art. Some rumors had noted previously that perhaps one or both would be removed. The Peoplemover tracks have sat vacant for years, since the closing of Rocket Rods.