Since 1991, the Walt Disney World Resort has operated a fleet of 12 Mark VI monorails. More than 30 years of research and development, started in the 50s, has brought the monorail technology to what we have today.

The current model of monorail began operation in 1990, with the full fleet of 12 in service by early 1991. The Mark VI has a higher passenger capacity as well as improved air conditioning, door systems and improved safety features. Each Mark VI train consists of six cars. The overall length is 203 feet with a capacity of 365 passengers.

The track consists of 26 inch wide, pre-cast concrete beams supported by concrete columns which are approximately 50 feet apart. Each monorail travels on rubber tires and is powered by a 600 volt DC propulsion system which includes eight DC motors rated at 112 HP each, with the power emanating from each side of the beam.

The 13.6 mile monorail system will carry over 150,000 guests to the Magic Kingdom and Epcot parks on an average day.

Magic Kingdom Resorts: 6:30am until 1 hour after park close, not including Extra Magic Hours

EPCOT: 1 hour before park open until 1 hour after park close, not including Extra Magic Hours

Outside of these hours, alternate watercraft and bus transportation is available.

Note: Riding in the front of the monorail with the driver was discontinued after June 2009's fatal monorail accident. There are currently no plans for guests to be allowed to ride up front again. 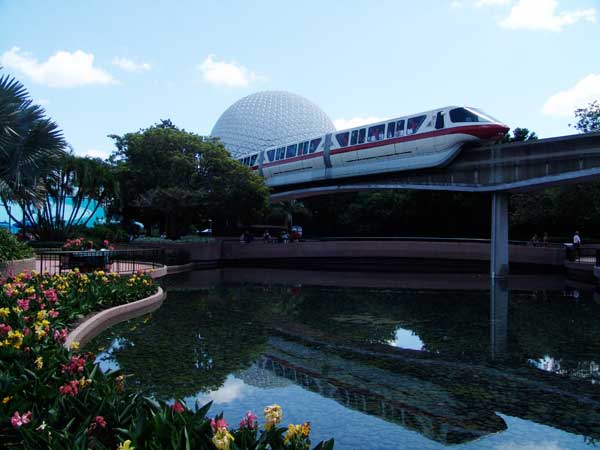