It’s Not the Size of the Castle: The Argument for Pixar Pier 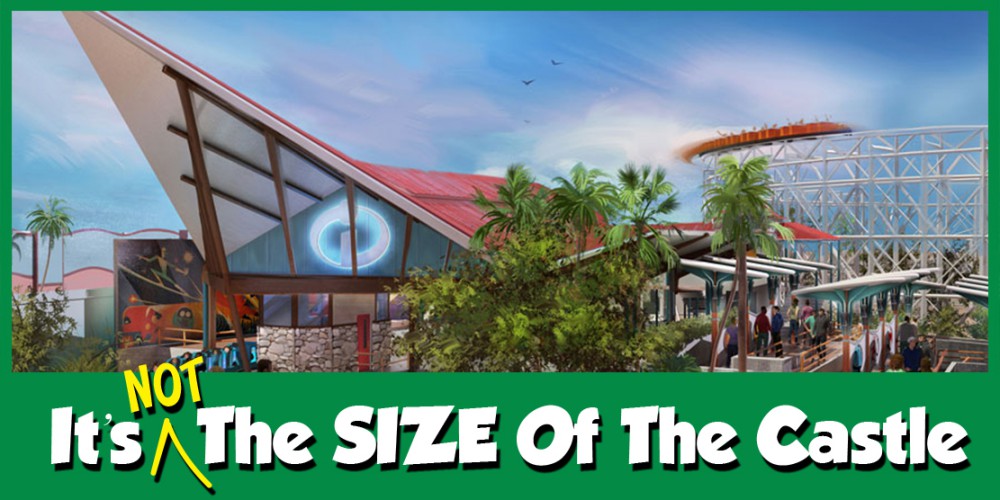 Welcome to It’s NOT The Size Of The Castle, where I’ll share my thoughts about what’s happening in and around the Disneyland Resort…the good, the bad, and the magical. You’ll get advice about travel, information about changes, and lots and lots of opinion. Enjoy!

It had to be done.

I’m talking, of course, about the current makeover of Paradise Pier to Pixar Pier.

When Disney California Adventure opened in 2001, Paradise Pier was filled with mildly-themed off-the-shelf carnival attractions. Aside from the addition of Toy Story Midway Mania and a few small updates (Mickey’s Fun Wheel, Silly Symphony Swings), not much has changed in the last 17 years. (RIP Maliboomer.)

So, something had to be done, but is Pixar the right fit?

The California theme for the California Adventure never worked, and like its Orlando step-cousin, Disney’s Hollywood Studios, the park is turning into a mish-mash of intellectual properties, so…why NOT Pixar? Disney’s Pixar-Marvel-and-a-little-California Park.

The update, however, is being thrown together fairly quickly, with most of the area opening within 6 months. The success of Guardians of the Galaxy-Mission: BREAKOUT! proves that it can be done, but that was a single attraction, not an entire land. The time-frame makes me nervous, especially with a major piece of it (Jessie’s Critter Carousel) not being completed until 2019.

The theming to the shops and food kiosks, to me is unimportant. A turkey leg is a turkey leg. Guests won’t be buying more turkey legs because the building has a better theme. The same argument can be made for the cosmetic changes to Mickey’s Fun Wheel and the Games of the Boardwalk. The changes likely won’t change the popularity of the attraction. By the way, the swinging gondolas are the only way to experience the updated Pixar Pal-A-Round.

What’s important to me are the changes happening to California Screamin’ and the overhaul of Ariel’s Grotto and the Cove Bar. With the popularity of the Cove Bar and the Carthay Circle Lounge, it’s not a surprise that Disney has chosen to “adultify” the entire space. I think the new Lamplight Lounge, with its Pixar animator vibe, may be just the biggest hit of the makeover. If you thought the line for the Cove Bar was bad before, just wait until June 23rd.

While I’m excited to imbibe at the lounge, I’m most looking forward to The Incredicoaster!

California Screamin’ is a fun coaster and I loved the onboard music, but the theming was non-existent. So, I’m not all that sorry to see it go, especially since The Incredibles is one of my favorite Pixar films. It’s a great superhero movie that doesn’t take itself too seriously and the music by Michael Giacchino is perfect.

I can’t wait to ride this attraction. With the new story elements and special effects, plus the Incredibles theme song blasting in my ears, this may just become my favorite roller coaster. My current favorite, Space Mountain, also features music by Michael Giacchino, so I won’t feel too guilty. I think the real key to Pixar Pier’s success may be what comes next. If the rumors are true and all we ever get is a former a bug’s land attraction themed to Inside Out, I will be disappointed. However, if we get a brand new attraction, or even the Ratatouille attraction that Epcot is borrowing from Disneyland Paris, it could be a game changer for Pixar Pier.

It will also be interesting to see if Pixar Pier ever annexes the remainder of Paradise Pier, which will now be known as Paradise Park. I can see them retheming everything EXCEPT The Little Mermaid-Ariel’s Undersea Adventure, but how do make everything around it Pixar, and leave that attraction alone?

Stay tuned for that, but in the meantime, let me know what you think of the Pixar Pier makeover. On June 23rd, will you be in line with me for The Incredicoaster, grabbing lobster nachos and a drink at the Lamplight Lounge, or avoiding the area altogether?