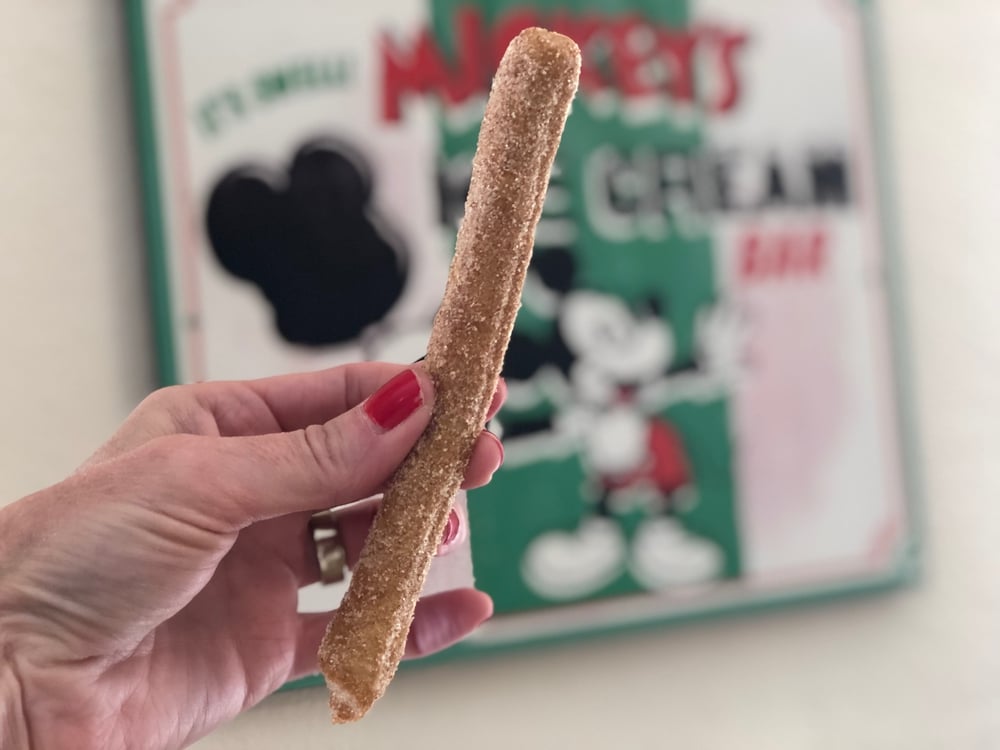 When it came to choosing a snack for this week's Saturday Snacks article, one treat was the clear choice. Last weekend, Disney released a recipe based on the uber-popular, ever-present Disney parks churro. Yes, you and I can now enjoy the sweet sugariness of the iconic park snack in the comfort of our own homes. Let there be rejoicing in the kitchens!

My husband and I spent nine glorious days at Disneyland in 2018. It was both our first trip to Disneyland and our 25th anniversary, so we had plans of all sorts about what we had to see and do while in Anaheim. I, of course, rolled into Disneyland Park with a must-eat snack list. No joke.

As a Walt Disney World devotee, I love the many things we have in our four parks. But, in my opinion, one thing that we lag behind on is in the area of snacks. I couldn't wait to get to Disneyland and try some of their unique and creative treats.

One of the snacks on my list was a strawberry churro. We visited toward the latter half of Pixar Fest, and, unfortunately, the strawberry churros were nowhere to be found. But no worries! We enjoyed our first ever Disney park churro in Walt's park. And all was right with the world.

I naturally had to try my hand at making the Disney Parks Churro Bites. I was born for projects like this. Let's goooo!

Of course, a prerequisite for any recipe we're making these days is that the ingredients have to be ones that we might already have or be able to get. The ingredient list for this recipe checks that box. I did not have a pastry bag and a large star pastry bag tip, but a quart-sized resealable baggie with a corner cut off did just fine.

The first step involved melting butter and combining it with water, salt, and a bit of cinnamon. After letting it cool slightly, the flour gets added, and a dough forms.

The dough then rests for 5 or so minutes, after which the eggs are added, one at a time. I tossed the dough into my stand mixer for this step as getting the egg incorporated into the dough proved to be a little tricky.

Once the eggs are combined with the dough, you can start heating the oil in a pan. I wanted to try to make my churro bites longer (more like what you see in the parks), so I chose a deep and wide sauté pan and used more oil than what is called for in the recipe. Scoop the dough into your pastry bag (or baggie), and squeeze the dough into the hot oil.

My churro bites were more like churro squiggles. I fished them out of the hot oil using tongs, but the recipe recommends a spider strainer if you choose to make the smaller bite-sized chunks. You'll know when it's time to turn them when the surface of the side that's facing up starts to crack a bit.

After draining your churros on a paper towel or two, they get rolled in the sugar and cinnamon mixture. Make sure not to let the churros drain too long; the cinnamon sugar will stick better to warmer churros.

And shazam! You have churros that just might make you feel like you're back at the Disney parks for just a minute! The churros are really good.

Be warned that the recipe makes a lot of churros...and even more if you make them into smaller churro bites. The churros pair beautifully with chocolate syrup right out of the fridge. I speak from experience.

The recipe was easy to throw together and fun to try. When we posted the recipe earlier in the week, a group member mentioned that she had made them into the shape of little balls. I love that so many variations are possible.

If you'd like to try the Disney Parks Churro Bites, the recipe and instructional video are below. If you decide to give the recipe a go, please jump into the comments section and let me know what you think. Happy snacking!