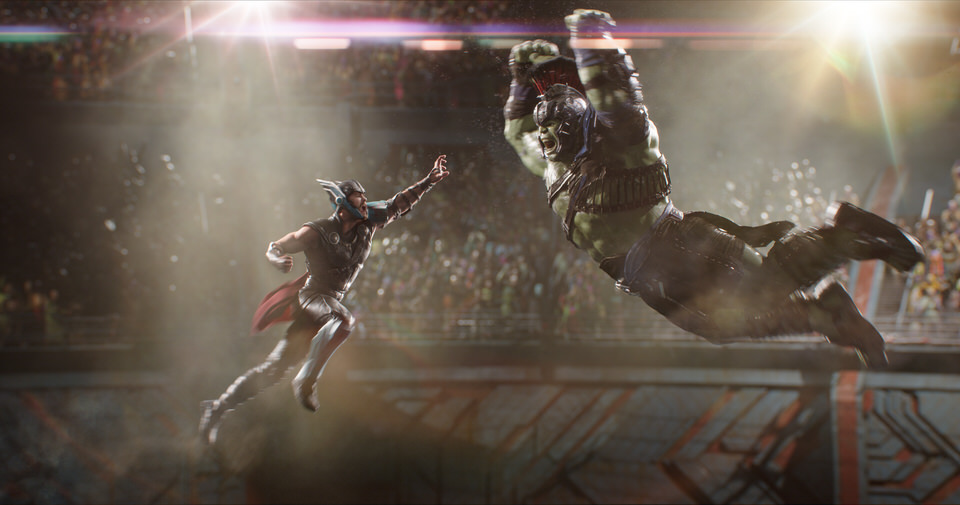 ShareTweetSubscribe
Marvel Studios has produced a lot of amazing films over the past ten years. Everyone has their personal favorite hero or series of movies whether it is Iron Man or Captain America. One series you don't hear people raving about often is Thor. There is nothing wrong with Thor, and I would even argue that he is one of the absolute best parts of The Avengers. However, Thor: The Dark World is one of the worst films Marvel has made and the original Thor film is well-made, but a bit too dramatic compared to the style that Marvel adapted to after The Avengers. That being said, Thor: Ragnarok is a breath of fresh air and brings new life to the series in what is easily one of the best Marvel movies - period. Let's talk about Thor: Ragnarok on Blu-ray and see if it's worth adding to your collection. Thor: Ragnarok The third installment of the Thor series keeps things light from the start. Thor battles off against Surtur who brings about the start of Ragnarok - the ultimate destruction of Asgard. Thor saves the day, but not for long. After Thor reunites with Loki, they travel to Earth to find Odin with help from Doctor Strange, but Odin dies soon after, but not before he announces that their sister Hela (the goddess of death) is on her way. Hela takes over Asgard and dooms Thor to the planet Sakaar after pushing him out of the Bifrost Bridge. There Thor is forced into a Contest of Champions by the Grandmaster, but has to do whatever he can to return back to Asgard and stop his sister.

Thor: Ragnarok is by far the most fun Thor movie and probably the funniest of all the Marvel movies. Jeff Goldblum's performance of the Grandmaster is one of the most hilarious characters and it seems as if he improvised every single bit of dialogue he has in the movie. The introduction of Valkyrie (Tessa Thompson) brings another strong female character on screen as if Cate Blanchett wasn't already doing enough as Hela. Chris Hemsworth seems to be having more fun playing Thor is this movie than any of his other appearances and a lot of that can probably be attributed to director Taika Waititi. If you still haven't seen Ragnarok, stop waiting and watch it - you won't be disappointed and it is worth the cost of the Blu-ray alone.

Bonus Features Thor: Ragnarok has something for everybody when it comes to bonus features. It isn't nearly as in depth when it comes to behind-the-scenes featurettes, but it has some of the most interesting deleted scenes and extras that you will find on a Marvel release. Let's take a look at the best special features on this disc. There are also five featurettes on the disk that look at Getting in Touch with Your Inner Thor, Unstoppable Women: Hela & Valkyrie, Finding Korg, Sakaar: On the Edge of the Known and Unknown, and Journey into Mystery. These start to overlap at certain points, but they give a good idea of the amount of fun the actors had on set every day while making Ragnarok. A cute but pointless feature included is 8bit Scenes which shows two battle scenes recreated as retro video-game sequences. You'll also find a Gag Reel, which of course is a short look at a bunch of inside jokes for a movie that you watched, but weren't there for the making. Whether or not you pick up Thor: Ragnarok for the movie or the special features, it is an absolute must-own. Your options for purchasing include digitally in HD and 4K Ultra HD, and Movies Anywhere, or on 4K Ultra HD, Blu-ray, DVD, and On-Demand. This review is solely for the Blu-ray, but if you have the capability to play 4K UHD then absolutely look into getting the 4K UHD Cinematic Universe Edition.