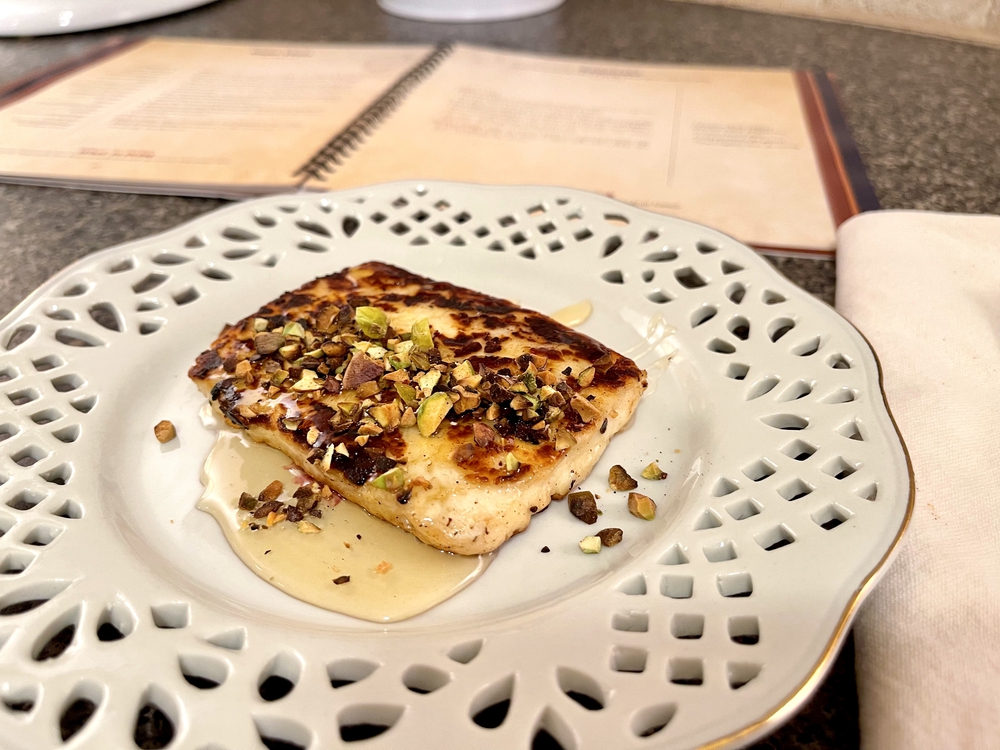 I have, for years, passed the Greece Global Marketplace at the EPCOT International Food and Wine Festival without actually stopping and enjoying anything that it had to offer. I would longingly smell the cheese, slow my pace to consider trying it, and ultimately continue walking, thinking that Greek food just wasn’t for me. Well, I have recently learned that I was wrong. Incredibly wrong.

On the day that I had my annual passholder preview for Remy’s Ratatouille Adventure, I was walking out of the France pavilion expansion late in the evening. I hadn’t had anything to eat, and I was in need of something fast. I made a right and started walking toward the Morocco pavilion when what should appear but the Greece Global Marketplace.

Greece, which has historically been located near the front of the World Showcase, is now at the back in between France and Morocco. I took one look at the menu, saw the Griddled Cheese near the top of it, and decided to go for it. I was hungry, the cheese smelled great, and who knew? Maybe I would like Greek food after all. I really enjoyed EPCOT’s Baklava when I made it for Saturday Snacks, and that’s Greek-adjacent, so it was worth a try, right? Friends, that Griddled Greek Cheese (Saganaki) was SO VERY GOOD.

Now as I said, the first time I had the Greek cheese, it was late at night. When I looked back earlier this week at the photograph I took that evening of the Saganaki, I found that it was incredibly fuzzy and super out of focus. I was apparently too hungry to bother to get a good picture. The picture just wouldn’t do for this article, so back to EPCOT I went. I had to have the Griddled Greek Cheese one more time (a chore, I know) and I had to get some good pictures so that I could show you. If you’re coming to the 2021 EPCOT Food and Wine Festival, please include a stop to get this cheese on your list. And it’s a win-win because it’s also a part of a Emile’s Fromage Montage. Eat five of the select cheese items (or five of the Griddled Greek Cheese dishes, as I would suggest) and get an edible prize. What’s not to love about that?

Last week’s Saturday Snacks recipe, if you’ll recall, was the coup de grace: Chef Paul Bocuse’s Ratatouille. It was the kick off the 50th Anniversary celebration, and we needed to go big. That something big involved a good amount of steps; today’s recipe is the complete opposite. We’ll be turning our attention to Food and Wine Festival’s Passport to a World of Flavors Cookbook from 2011. My hubby bid on and won (my hero!) this cookbook for me during the DIS Family Reunion auction to raise money for Give Kids the World. Today’s recipe is few in steps, and fairly simple. Well, once you get your hands on the cheese, that is.

My Publix offers a large selection of cheeses from around the world. Just about any and every cheese produced by mankind, including a few I’m sure no one knew about, are represented in that cheese case. Except the one that I needed for today’s recipe. The recipe (which, mind you, is now 10 years old) calls for Kasseri cheese. Kasseri cheese is just about the only cheese that is not readily available at my grocery store. Or on Amazon. Or on the internets, as it turns out. Well, that’s not exactly true. I could’ve paid around $36 to get it here to my house, but it wouldn’t have arrived until next week and who wants to pay $36 for cheese? Side note: If you do, in fact, want to pay $36 for cheese, I won’t blame you. I’m a fan of cheese, but I just wanted to pay a bit less for today’s purposes. You do you. Ahem.

Thankfully, today’s recipe includes a cook’s note that states that Kasseri is a semi-hard cheese made with sheep’s or goat’s milk with a bit of a salty, sharp flavor. I turned to those on the Internet who know better than me and found out that Halloumi cheese would be an acceptable substitute for Kasseri. Whew! And, thankfully, my grocery store had Halloumi cheese in that fancy dancy cheese case. And when I returned to EPCOT this week and enjoyed another helping of the Griddled Greek Cheese with Pistachios and Honey, guess how the item was described on the receipt? Griddled Halloumi cheese. Yep, even the chefs at EPCOT had to go with the back up cheese.

Our very first step in preparing today’s recipe is to chop approximately 10 pistachios and toast them. I would typically want to use raw pistachios in this case, but I needed only 10, so the small pack of salted and roasted nuts had to do.

The recipe asks for us to heat the pistachios in a small non-stick sauce pan for 5 to 7 minutes or until golden brown. We’re to do so over medium-high heat. I chopped the pistachios and tossed them into the smallest pan on earth, and well before 5 minutes was up, had a little brown pistachios. They were much more brown than the pistachios that are currently strewn across the Griddled Greek Cheese (Saganaki) in EPCOT’s version, but I figured they would do. I threw in an un-toasted pistachio before everything was said and done so I had a bit more of the bright green color going on.

I also ended up tossing the toasted pistachios into my Pampered Chef chopper to ensure that the nuts were chopped a bit more finely than they turned out after toasting. It did the trick with just a few chops, and I set them aside.

We’re now to turn our attention to the block of Halloumi cheese. Careful when you’re opening the package; it’s a semi-hard cheese, so there is going to be a bit of liquid floating around in there. The recipe asks us to cut the cheese (insert required giggle here) into 2-inch wide by 1/2-inch thick slices. My block of cheese was about 2 1/2 inches wide, and I called it good enough. It’s Saturday, and you and I don’t have time to be fussing over a half inch of cheese, that’s for sure.

I sliced the Halloumi cheese into three fairly even slices of right around 1/2-inch thick. It’s worth noting at this point that 1/2-inch thickness is much thicker than as what is currently being served in-park. Nonetheless, I persisted. A half inch it was.

The recipe next called for me to pull out a non-stick skillet and place it on the stove over high heat. We are to bring that skillet up to being “extremely hot” and add the slices of cheese which would then, in theory, get a nice toasty brown crust on the outside yet not melt on the inside. If only that had happened.

Instead, what happened is that the cheese hit the pan and stuck to the pan even though the pan was non-stick. After trying to coax the cheese into not sticking to the pan, I decided to back up and punt a bit. I played around with adding non-stick spray, and then ultimately got a different skillet out of the cabinet, coated it with non-stick spray, and then added a bit of olive oil. I am normally a stickler about these Disney recipes; what Disney says, I do whether the results be good, bad or otherwise. However, when working with just over ten dollars of Greek cheese, I have to draw the line. I’m not wasting that amazing cheese. I went into “save the cheese” mode and got the second skillet up to temp (although less than “extremely hot”) and placed the half-griddled cheese slices into the pan. I turned the heat down just a bit, which allowed the cheese to get toastier on the outside.

Ultimately, the cheese got more brown than what I would want it to be. Yes, what is being served in Epcot is brown, but it’s more of an elegant “we meant to do this” brown, not “this pan was too hot and there was nothing to prevent it from sticking to the pan so this is what you get” dark brown. That being said, griddled cheese is griddled cheese and we’re going to eat it no matter its shade. And ultimately, its shade did not matter one bit. It was really good.

The 2011 recipe also says that we should serve the cheese with toasted baguette slices. It’s worth noting that this is no longer done in the park, but for the sake of today’s Saturday Snacks recipe, and the fact that I love all carbs, I figured it wouldn’t hurt. I was at the grocery store very late in the evening, so I had to take what I could get. And what I could get was a multigrain baguette, and I decided it would have to do. I sliced very thin pieces, placed them on a cake pan, and put them under a low broiler with the oven door open and an eagle eye on them. I flipped them over halfway through, and had beautifully little toasted multigrain baguette rounds when I was done.

The recipe now asks for you and me to drizzle the slices of griddled cheese with honey and top each cheese slice with a sprinkling of toasted pistachios. I gently drizzled my first slice of Saganaki with honey, added the pistachios, and stood back to admire my work. I was really hoping this would taste somewhere near what it does when I’m standing in the World Showcase.

Dear friends, this was good. Is it exactly like what I’ve had now twice in EPCOT? Not exactly, but it’s incredibly close. As I mentioned earlier, the Griddled Greek Cheese currently being served in EPCOT is thinner than 1/2-inch thickness. In my estimation, what the chefs are serving up these days is more on the 1/4-inch thick side of things.

That being said, the toasty Halloumi was warm and salty, and when paired with the honey and salty pistachios, was out of this world. I would love to pick the EPCOT chefs’ brains on how to get it exactly like what I’ve had in-park, but this will do in the meantime.

If you’re someone who wants a bit more sweet with your salty, pour on more of that honey. If you want a little more salty going on, sprinkle on some extra pistachios. That’s the beauty about re-creating these Disney snacks at home; you get to call the shots.

I hope that your weekend is a great one! I’m off to the eye doctor for my annual eye exam and check up. It’s so much fun being an adult, right? Whether your weekend will be filled with adulting tasks or moments of channeling your inner child (or both), I hope that it’s just like the cheese that we’ve made today: a little salty and a little sweet. The perfect combination. Thanks so much for reading, everyone. I appreciate you greatly.

Ready to bring a taste of Food and Wine Festival into your kitchen this weekend? The recipe is below:

Cook’s Note: Made in Greece, Kasseri is a semi-hard cheese that is traditionally made with sheep’s or goat’s milk with a sharp, salty flavor and cheddar-like texture.