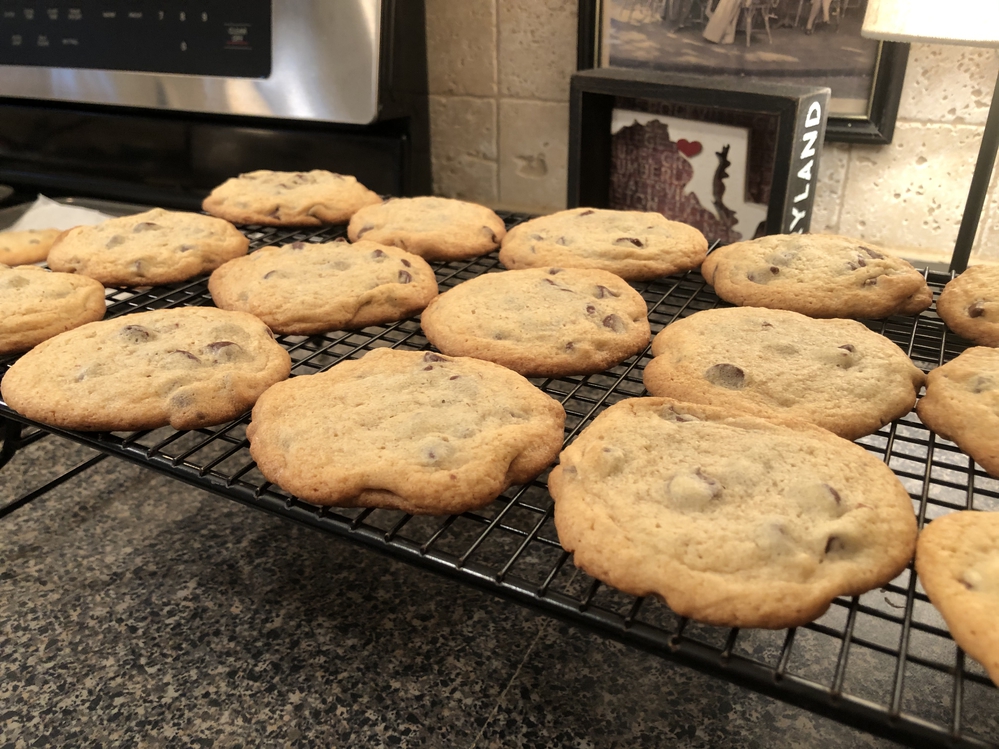 Like a moth to a flame, I’m back for more cookies. Last week, we took a one week Saturday Snacks sweets break and whipped up a fresh and tropical smoothie from Disney Cruise Line. That one week break from all of the sweet treats was good, but now we’re back to business, and we’re jumping right on in as we whip up another recipe with “Ghirardelli” in the name. It goes without saying that I have high hopes for this weekend’s recipe.

Two weeks ago, we made Ghirardelli’s Ultimate Double Chocolate Cookies, and let me just say that those little babies did not disappoint. Holy cow; they were good. A month or so ago, we made Grand Floridian Resort & Spa’s Chocolate Chip Cookies, and, as you would expect from the Grand’s bakery team, they were amazing.

Today, we turn back to the ever-faithful Ghirardelli. For those of you who haven’t visited Ghirardelli at Disney Springs recently, let me assure you that it’s still serving up yummy treats to awaiting guests.

As we did for the Ghirardelli recipe two Saturdays ago, we’re going to use Ghirardelli’s semi-sweet chocolate chips. Sometimes only the best will do. That being said, if you have non-Ghirardelli chocolate chips on-hand, those will be perfect. We Saturday Snackers are wise like that.

I’ve mentioned before that I’m a huge fan of the Nestle Toll House cookie recipe. It’s perfect, and it can single-handedly turn a day around. It’s with the Toll House recipe in mind that I approached the Ghirardelli version. After comparing the two recipes, the biggest differences are a decrease in the salt content and an increase in the vanilla extract included in the recipe. The rest of the ingredients are incorporated in similar fashion, and the baking times are the same.

Well, there’s one additional difference between the Ghirardelli recipe and the Toll House recipe, but we’ll get to that in just a bit. And never mind those optional walnuts or pecans. Y’all know after the last cookie recipe that, if they’re not officially called for in the recipe, I’m not including them. No thank you very much.

Our first step is to preheat the oven to 375 degrees, and toss the flour, a teaspoon of baking soda, and 1/2 teaspoon of salt into a bowl.

Give everything a whisk, and set it aside while you tackle getting the wet ingredients ready.

Into the bowl of a stand mixer (or another large bowl), place one cup of softened butter, and 3/4 each of both brown and granulated sugar. Using a mixer, cream the sugars and butter together until they take on a creamier texture and a lighter color.

Once the mixture is creamed, the eggs get dropped in one at a time. Mix the first egg in before you add the second, and, once the second egg is fully mixed in, the 2 teaspoons of vanilla can be tossed in and incorporated.

The recipe asks us to place tablespoons of dough onto ungreased baking pans (I’m lining mine with parchment paper these days), and to bake them for 9-11 minutes. I made my tablespoons heaping because we’re not messing around.

After 10 minutes, glorious golden brown cookies emerged from the oven. I let them rest on the baking pans for a minute or so, and then transferred them to a cooling rack.

As you might’ve guessed, while the cookies might have been resting on a cooling rack, I had no intention of actually letting them cool before digging into my first one. Friends, these cookies are good. Really, really good. If you’re looking for a great go-to chocolate chip cookie recipe, this would be a good one to turn to.

The outside of each cookie is slightly crunchy, and the inside is soft. Just what you want in a cookie, if you ask me. The Grand Floridian’s recipe produces a puffier, slightly drier (although incredibly delicious) cookie; Ghirardelli’s version is more mainstream.

I said earlier that chocolate chip cookies have the potential to turn a day around. This recipe is no different. This one gets an A and a scratch and sniff sticker. It’s extra good, and it’d be perfect for a rainy afternoon or a Tuesday or any other day or weather forecast in between.

If you’re ready to bake up some chocolatey goodness, the recipe is below. Happy Saturday!