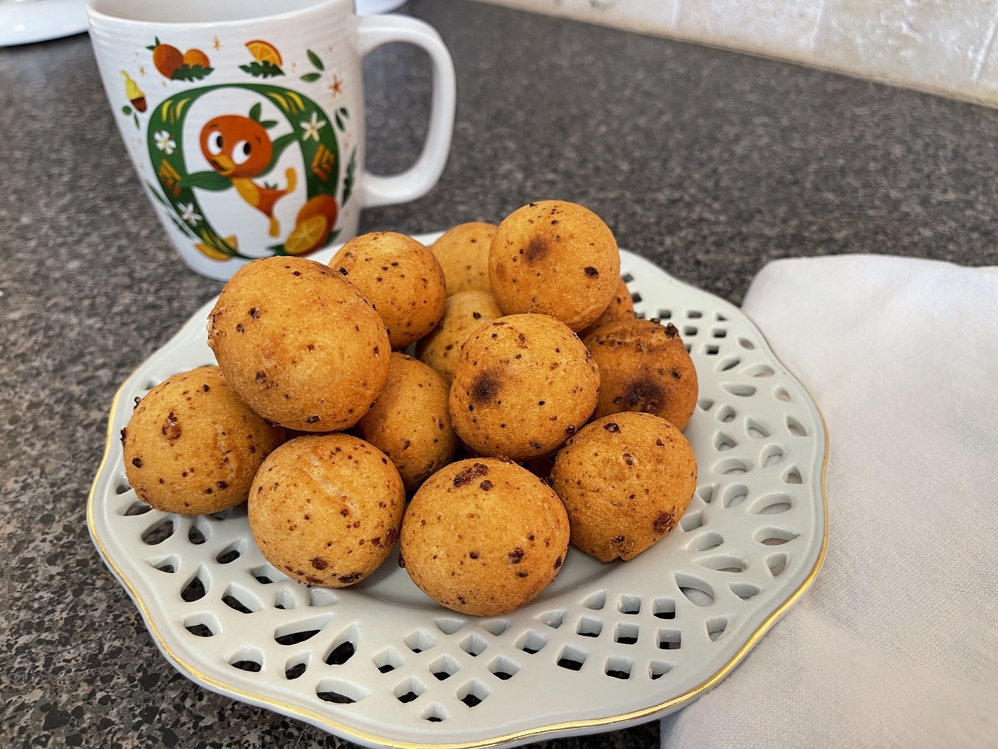 Disney had me at CHEESE FRITTERS. When Disney dropped a recipe for Julieta Madrigal’s buñuelos, I immediately jumped on it for Saturday Snacks. If there are cheese fritters to be made, by golly we’re making ‘em!

First things first: if you haven’t watched Encanto, please do so. It’s incredibly good, and, the more you ruminate on it, incredibly profound. I’ve watched it once, and another viewing will be had soon. I won’t spoil it for you, but suffice it to say that the mom of the family makes some very special Colombian cheese fritters. This is the kind of Disney snack magic we need right about now.

Our first step in creating Julieta’s buñuelos is locating Cassava flour. My grocery store doesn’t carry it, and unfortunately, the closest Latin food grocery store is 30 minutes away, so I turned to Amazon. Thankfully the flour’s price was completely reasonable. Cassava is similar to a yam or potato and is gluten free.

Our second step is locating the cheese for our buñuelos, and this required a call to my hubby’s dear friend Eddie. And before everything was said and done, Eddie had reached out to his mom who lives in Colombia. The recipe asks for us to use queso costeño, which turns out to be the crème de la crème of the cheese world. It also turns out to be VERY hard to locate. It just isn’t sold ‘round these parts. Eddie reached out to his mom to ask what her preferred backup cheese is when she’s making buñuelos, and she said that Farmer’s cheese is her go-to.

When I’m working on a Saturday Snacks recipe, I try to stick as close to the original recipe as I can. If we’re trying to re-create Disney snacks, let’s get as adjacent to that snack as humanly possible, right? Thankfully, Disney gave us some backup cheese suggestions, and after checking into some of the non-Disney buñuelo recipes available online, it turns out that Disney’s backups were echoed by others. We needed 3/4 of a cup of feta cheese and 1/4 of a cup of queso fresco. If you’ve been hanging around Saturday Snacks for all of 23 minutes, you likely know of my love for queso fresco. It is a cheese that can do no wrong, and any excuse to have it hanging out in my fridge is a very good thing (see: Pao de Quiejo). Disney also suggests mozzarella cheese as a possible backup, but using queso fresco felt just a tad more authentic.

Our first step is to crumble that gloriously salty queso fresco (and please do as I did and shove an extra fistful into your mouth), and mash the feta cheese if it needs a little extra crumbling. Now’s also a good time to leave 2 tablespoons of butter out on the counter to come up to room temp.

Combining all of the ingredients requires a big mixing bowl or a clean counter. I opted to use the biggest bowl that I own and started tossing in the required items: 1 cup of cassava flour, 1/2 cup if cornstarch, the cheeses, 2 tablespoons of sugar, 1 teaspoon of salt, 1/2 teaspoon of baking powder, the 2 tablespoons of room temperature butter, 1 egg and 2 tablespoons of milk.

That inner child in all of us? Call them forward because our next step is to mix all of the ingredients together with our hands. Get in there and get to work. And have fun.

My dough? Well, those potentially magical ingredients decided not to come together. They started to and then the remainder just sat there and no amount of mashing and squishing would make them combine. The cheesy dough needed more liquid. And I suspected that the feta being on the dry side was partly to blame. I ended up adding what amounted to just over twice the amount of milk than what was called for.

Finally, after working the extra milk into the dough, everything came together. Whew.

The recipes tells us to divide the dough into 32 balls, and I turned to my trusty 1 tablespoon cookie dough scooper for the job. Julieta Madrigal’s buñuelos are much bigger than 1 tablespoon in size, but I wanted to try to land things as close to the recipe as I could, so smaller cheese fritters would have to do. I got 28 dough balls in total and declared that to be good enough.

Friends, it was now time to fry those dough balls. And, if you’ve been a part of the Saturday Snacks family for a bit, you likely know how very deeply I abhor trying to deep fry anything. It’s the oil keeping its temp thing that really throws me. I consistently fail to get that temp under control, leaving me with charred remains. I read recently that we should simply drop the temp significantly once it hits its target temperature. I’ve tried with no avail to do this in the past, but I was willing to give it a whirl again.

I grabbed my candy thermometer and brought the oil up to temp over high heat like the recipe suggests. We’re supposed to use 3 cups of vegetable oil for this step, but I found that to be woefully insufficient and added more just in case.

The recipe says that the oil should take 3 minutes to come up to temp. Respectfully, it lies. After 3 minutes, the oil wasn’t even warm enough to register on the thermometer. When the temp eventually reached 325 degrees, I dropped the heat down and placed 3 dough balls into the pot.

After just a few minutes, the fritters were a lovely golden color. I scooped them out of the oil with a slotted spoon, placed them on a paper towel-lined plate, and dropped another four in the oil. I kept frying and scooping and dropping more in until I had a plate filled with fritters. It was my own little buñuelo factory. And I feel like Eddie’s mom and Julieta Madrigal would be proud.

The cheese fritters were firm on the outside and soft on the inside. They were lightly cheesy, and, much to my surprise, very savory. I’m not sure why I expected them to be a little sweet, but in case you’re expecting the same as me, let me help get you into the savory mindset.

I discovered after some in-kitchen research that buñuelos are supposed to be savory. I hadn’t messed anything up. After further digging around, I found that they are typically served with a cinnamon-flavored custard during the holidays. I can totally see how the slight cheesiness of the buñuelos would pair nicely with the creamy coolness of a cinnamon-laced sweet custard.

If I make the cheese fritters again, I will definitely go with Eddie’s mom’s suggestion and use Farmer’s cheese. I’ll likely also back down the amount of cornstarch that I use. A half of a cup is a lot of cornstarch, and while another recipe that I found uses the same amount, there were others that used less. I’m thinking that less cornstarch will allow a greater amount of moisture in the fritters.

Making the buñuelos, and more importantly learning something new about another culture and its traditions, was so much fun. Please let me know if you make the fritters, and let me know what you think.

Thanks so much for reading along! I hope that your weekend is filled with fun and possibly just a bit of magic. Julieta Madrigal would want nothing less.

Ready to try your hand at Julieta’s magical buñuelos? The recipe is below: