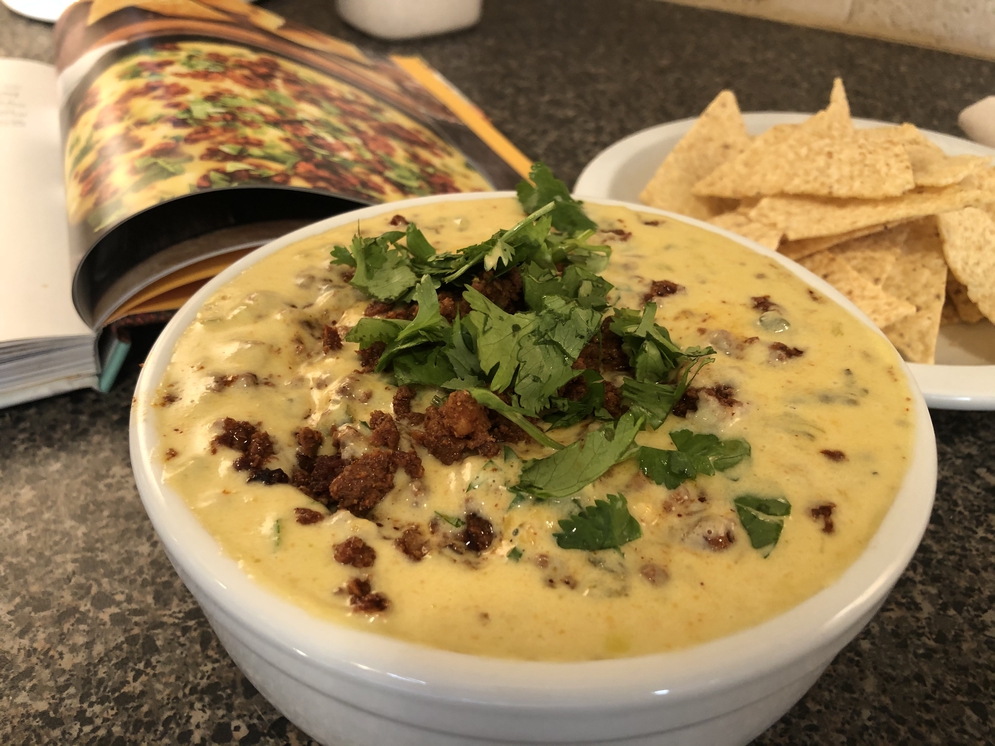 Sometimes all you want on a slightly overcast, chilly day is something warm, perhaps a little spicy, and incredibly comforting. And while we gathered here at the virtual Saturday Snacks table are all for the sweeter things in life (cookies, cupcakes, and little French brownies), we recognize that into every life a little something salty must fall. My savory Saturday Snacks friends, this one’s for you.

At this time, during normal years, the cast members at Disney California Adventure would be hosting a festival of their very own. Festival of Holidays would normally be taking place, and like all good Disney festivals, it involves food.

Today’s recipe comes from the Disney Festivals Cookbook, and comes straight from the DCA event that celebrates Christmas, Hanukkah, Diwali, Kwanzaa, and Navidad. Friends, today we are welcoming the spicy, complex flavors of Chorizo Queso Fundido into our kitchens.

In 2017, the Chorizo Queso Fundido was found at the Chips, Breads, and Holiday Spreads Marketplace, and in 2018, it moved to the Brews & Bites booth. It was served in-park with house-made tortilla chips, but today, I’ll be using the store-bought variety. We’ll be doing enough as is. And, spoiler alert, it’ll be soooo worth it.

The ingredients list for this recipe had me purchasing items that I had never purchased before: poblano peppers, a serrano pepper, and a pound of ground chorizo sausage. I’ve used a link of chorizo before, but never the ground version. Research would be involved throughout the creation of today’s snack, and while I’m at it, I’d like to thank my sous chef for this weekend, the internet. Your little videos taught me that gloves are recommended when slicing into a serrano pepper after I had begun slicing into said pepper (better late than never, I suppose), you showed me what done ground chorizo sausage looks like because it doesn’t really change color as it cooks, and you helped me to know that I only needed to use half of the onion chosen for me by the grocery pickup team because it was one of the largest sizes that onions can possibly be, on average. Thank you.

Our first step in tackling this recipe is to cook half a pound of the ground chorizo sausage. The spiciness of this sausage is evident as soon as this package is opened, but it’s not too horribly so. The taste, while bringing heat, is warm and deep. This is good stuff.

Once the sausage breaks up and it crumbles like cooked ground beef does, the sausage is done. I scooped it out of the pan and let it drain on a plate lined with paper towels.

Our next step is to preheat our oven’s broiler (making sure that a rack is only 2 inches or so away from the broiler), wash the poblano peppers, and snap off the stems. Leave everything else as-is for now. Place them on a baking sheet or pan, and get ready: you’re about to roast poblano peppers. Woot!

This is one of the steps during this recipe that I felt like I was doing something that I’ve seen done a million times on Food Network, but here I was actually doing it in my own kitchen. And, as it turns out, it wasn’t difficult at all.

Once your broiler has preheated, the peppers go on the rack closest to the broiler and will spend the next 15 minutes getting charred. Be warned: the skin of the peppers will make popping sounds as the roasting process progresses; don’t worry. I stayed really close during the time that the peppers were roasting, and, as the recipe calls for, I turned them frequently so that they would be evenly charred.

After 15 minutes, pull those peppers out of the oven and place them carefully into a bowl. Cover the bowl with plastic wrap and let it sit for 10 minutes.

While your peppers are in time out, you can turn your attention to prepping a few of the next ingredients that you’ll need. You’ll need to chop 4 cloves of garlic. As I was chopping the garlic, I was reminded again that the scent of fresh garlic is completely intoxicating. Garlic has officially joined my list of things that can do no wrong.

Next up is to chop your onion. If you have an average-sized onion, you’ll need to chop the entire thing. If you have the granddaddy of them all like I did, just use half.

Our time of chopping and slicing finshes up with the serrano pepper. And, yes, I was fresh out of gloves, so I just continued slicing and dicing. Thankfully, I was a-okay, but the chef on the video said that sensitive skin sometimes doesn’t agree with the inside of serrano peppers, so proceed with caution.

It’s recommended that we begin slicing the serrano pepper lengthwise, clean out the seeds and such, and then chop it completely from there.

After 10 minutes, it’s time to turn our attention back to the roasted poblano peppers. The recipe asks us to ensure that all of the skin is removed from the peppers as the skin can have a bitter taste. The skin, for the most part, peels away from the pepper pretty easily. For some of the tougher spots, I went with the suggestion made in the recipe and rubbed the charred skin away with a paper towel.

Once the skin is removed, you can remove the seeds and the tops of the peppers can cut them into 1/2-inch pieces. Yes, they’ll be a bit slimy and the cut pieces won’t look incredibly even, but that’s okay. No worries!

I transferred all of my chopped ingredients into ramekins so that they were ready to go, and poured 1/4 cup of canola oil into my pan. The recipe recommends using a medium-sized saucepan, but I opted to give my favorite large pan a wash after cooking the chorizo and use it, and it turned out just fine.

After the oil heats for 5 minutes on medium heat, it’s time to add in the poblano peppers, the serrano pepper, and the onion. Cook the three for about 5 minutes.

The smell emanating from the pan during this step will be heavenly. Savor it. This is the smell of a late fall/early winter’s weekend. Ahhh. After 5 minutes, toss in the 4 chopped cloves of garlic and give everything an additional minute to cook.

After a minute, pour 2 cups of heavy cream (the OG ingredient that can do no wrong) into the pan and let it cook for 3 to 5 minutes on medium-low heat. You want the cream to get hot but not to the point that it boils. Stir and stir and just keep stirring.

Take a minute and chop half a bunch of fresh cilantro so that it’s ready to top the queso fundido. If cilantro isn’t your jam, you can skip this step, or just use less than half a bunch. We happen to love fresh cilantro ’round these parts, so I gladly adhered to the recipe on this one.

Once everything’s nice and hot, turn your heat down to low and add in 1 cup each of cheddar cheese, mozzarella cheese, and Monterey Jack cheese. I opted to buy the cheeses as blocks and shred them with my trusty Salad Shooter, but you can purchase shredded cheese to save a bit of time. Stir everything until the cheeses have melted and the mixture is smooth.

I gave my mixture just a few additional minutes of cooking on medium-low to get it to the thicker consistency that I was looking for, and then transferred it into a bowl.

Give the queso a sprinkling of coarse salt.

At this point, you should add in your chorizo. I was so excited about topping the bowl with that fresh cilantro that I initially skipped the chorizo step.

Once I laid eyes on the chorizo sitting on my counter and realized what I had done, I tossed in the sausage and mixed it in along with the cilantro. More cilantro is a good thing in my book. And then you can top the bowl with fresh cilantro. Ahem.

Grab and handful of tortilla chips, and you’ve got a party on your hands.

I think we’ve all had queso; a little research helped me to understand this week that the fundido part comes in when you add the peppers, onions, and garlic. The fundido portion of this recipe took what could be a yummy snack to be consumed while watching a football game and transformed it into a delectable treat with layers and layers of flavor.

The queso fundido isn’t too spicy; if you’re worried about the overall spice level, you can add the chorizo just a bit at a time.

I can’t overemphasize how good this was. The chefs at Disney California Adventure have come to play, and they’ve taught us the value in learning new things and taking a few extra steps. This isn’t your average queso; this is art. No joke. Thank you, chefs.

My hubby and I gleefully chowed down on that bowl of chorizo queso fundido, and I know that it’ll be something that I make again. It would be the perfect snack for any chilly afternoon.

What’s even better is that the combined scent of the peppers, onion, cream, and cheese will linger in your kitchen for several hours after making this dish. It’s a win-win.

So, what are you cooking up these days? How is your holiday prep going? If there’s ever a holiday season that needs a comforting bowl of spicy queso fundido, it’s this one.

Whatever’s on your plate this weekend, I hope that it’s a good one. Stay warm, stay healthy, and eat something incredibly yummy.

Ready to invite some spice into your life? The recipe is below: