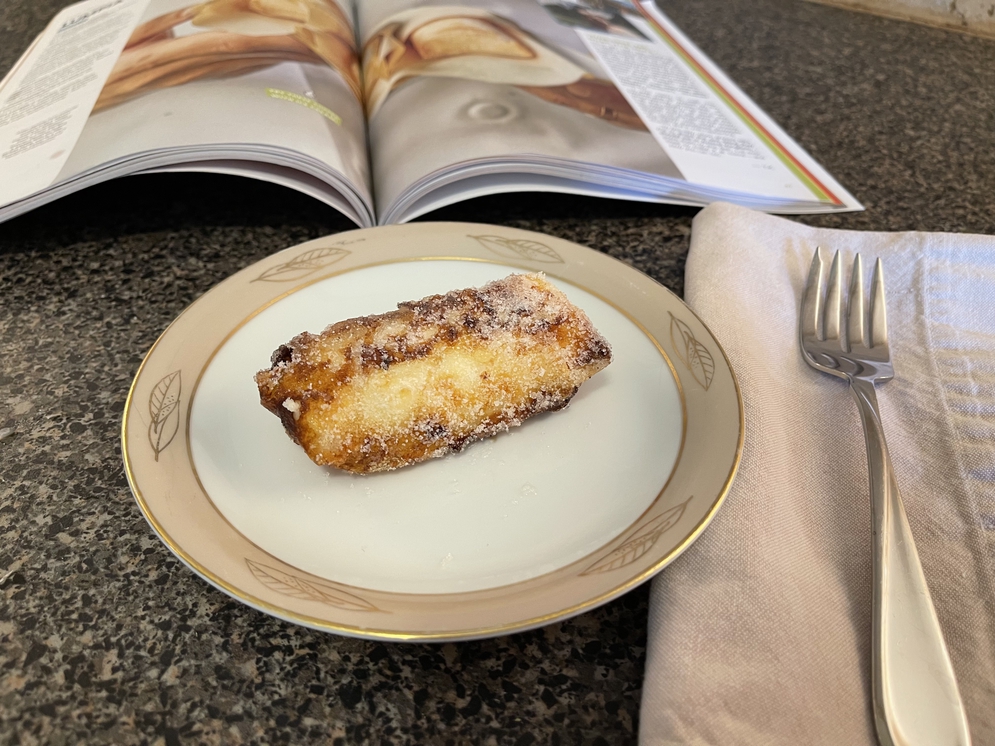 Happy Saturday, everyone! Today brings a couple of firsts here in the realm of all things Saturday Snacks. To begin with, I’ll be making this weekend’s recipe from the recently published Delish Loves Disney. Getting my hands on a new collection of Disney parks recipes always makes me very happy, and I’m enjoying the Delish spin on things. The recipes are well-organized and personal Disney experiences of the Delish team are scattered throughout. It gave me hope that everyone involved really knew what they were talking about Disney recipe-wise.

Secondly, I will be attempting my first go at a treat from Pandora – World of Avatar in Disney’s Animal Kingdom. Ever since first stepping into Pandora during the land’s soft opening, I’ve been enchanted by its other worldliness. From word go, Pandora’s food choices were a cut above what you and I found in the other Walt Disney World parks. Thankfully, you and I can now nibble on options that rival those found in Pandora that have popped up in the years since in other spots across Disney property.

While I’m typically drawn like a moth to a flame to Satuli Canteen for my beloved Cheeseburger Pods when in Pandora, there was one fan-favorite snack that I’d never had, and, as it turns out, it’s the very snack that you and I will be making today: the Pongu Lumpia.

The Pongu Lumpia can be found at the land’s walk-up bar, Pongu Pongu. When the snack debuted, it was sold as two smaller lumpia with a price tag that hovered around $6. Nowadays, guests are served one larger lumpia for $3.49. And, as a side note, just in case the lumpia lands on your must-eat list for your next Disney World trip, might I also suggest pairing it with a Night Blossom? The Night Blossom is a pear-flavored non-alcoholic slushy topped with boba balls that is, on a hot Disney day, divine. Careful; it’ll also induce a sugar rush, but it’ll be so worth it.

As you might’ve guessed, I made my way to Pandora one afternoon this week to savor what others have called an amazing snack. I would be the judge of that, and judge I did. The lumpia wasn’t as fried as I thought it would be (the Delish recipe calls for them to be fried to a golden brown), and I figured that that might just vary with each batch. What I found inside of that lightly-fried spring roll wrapper was a ton of cream cheese and diced pineapple. And the two made for quite a unique, sweet, and somewhat light snack. It was gooood.

It was my goal this weekend to keep the overall ingredients list to a minimum, so the lumpia recipe was right up my alley. One block of softened cream cheese, 2 cups of fresh diced pineapple (made much easier by the pre-cored variety at the grocery store), a bit of water, and granulated sugar was all that was called for. Sounded great to me. Oh, and oil. You and I will need an inch of oil in the bottom of a skillet to fry the lumpia. So be sure to grab a bigger bottle. Better to have more than not enough.

My first step was to set the block of cream cheese out on the counter to soften. My second was to get that pineapple diced. Thanks to my faithful friend, Google, I confirmed that one pound of fresh pineapple yields approximately one cup of diced pineapple. Throw that core away (or, as Google suggested, use it for smoothies), and get to chopping. Yes, this process took a bit, but it was simple work, and I enjoyed making sure that the pineapple pieces were nice and small.

My next step was to unwrap the rice paper wrappers and try to figure them out. The recipe asks for us to keep the wrappers covered with a wet paper towel to keep them from drying out. That’s our first word of warning, friends. These little babies are a bit fragile and a tad finicky. They felt like thick vellum paper, and, if they aren’t sufficiently wet, when you try to fold or bend them, they’ll crack. And you’ll be frustrated. Trust me.

I found that while the recipe tells us to wet the last part of the wrapper after folding the lumpia in order to create a seal, if I stopped and brushed the perimeter of the entire wrapper, it was much easier to work with and less likely to crack. So, when you pull out a wrapper to begin building a lumpia, have a little bowl of water and a pastry brush at the ready. You’re gonna need it. Sanity is a good thing.

I chopped the block of softened cream cheese into 10 equal pieces as instructed and placed one onto the first spring roll wrapper.

As I began spreading the softened cream cheese on the first wrapper, it became quickly apparent to me that this was a job for my offset icing spatula. Side note: I have looked longingly for twenty-seven years at offset icing spatulas. I only recently bought one. Why in the LITERAL WORLD did it take me so long? It’s the best seven dollars I think I’ve ever spent on a kitchen gadget. It has a kajillion uses. Life is short. Buy the spatula. Commercial over.

Using the spatula, I spread the cream cheese as evenly as I could.

I placed three tablespoons of diced fresh pineapple on top of the cream cheese, and then sprinkled half of a teaspoon of granulated sugar on top of that. I then brushed water around the edges of the wrapper and began rolling the wrapper from one side toward the center.

It quickly became obvious that, although the powers that be at Delish and Disney want us to use 3 full tablespoons of diced pineapple, if your spring roll wrappers are on the smaller side, you may want to knock the amount down by half a tablespoon or so. That’s what I did moving forward, and I was happier for it.

As you roll the lumpia, be sure to tuck in the sides of the wrapper, and once you’ve reached the other side, make sure that the edge is nice and wet in order to seal the whole thing.

I placed my rolled lumpia on a baking sheet covered with parchment paper seam side down. Continue building and rolling your lumpia until all 10 are lying in wait on your baking sheet. I must say that I got better at rolling the lumpia as I went. Number six was my best, bless its heart. If you have edges that crack, don’t stress; just use a little extra water and tuck those edges in.

We now need to muster up a lot of patience; those lumpia need to chill out (literally) in the freezer for at least 4 hours, and up to overnight. I gently transferred my little lumpia to a baking sheet that would fit into my freezer (thanks a bunch, people who designed the oh-so small side-by-side freezer. Not.), and went to Animal Kingdom to try the real thing.

Pandora’s lumpia are packed with cream cheese. Packed. And nice, diced chunks of pineapple are tucked lovingly inside. It was a great snack, and I had high hopes for the lumpia that were hanging out in my freezer.

Due to the rest of the evening’s timing, I let the lumpia hang out in the freezer until the next morning. Here’s where things got tricky: we are to bring an inch of oil up to 350 degrees and fry the frozen lumpia for three minutes on each side. Friends, this is easier said than done. I pulled my favorite skillet out of the cabinet and poured in an inch of oil. I grabbed my candy thermometer and slowly brought the oil up to the correct temp.

Now, I may not know all of the kitchen things, but I do know that adding frozen things to hot oil can be dicey. When the oil was up to 350 degrees, I carefully placed four lumpia into the oil. As you might have guessed, the oil popped and spewed just a bit, and, unfortunately, the lumpia quickly turned a much deeper shade of brown than I wanted them to. Sigh.

I pulled the lumpia out of the oil and drained them on a paper towel-lined plate. If, at this point, your lumpia are the color that you’d like them to be, you can roll them in the remaining sugar and gobble them up.

I opted to turn the heat down and try things again. I dropped two new lumpia into the somewhat cooler oil and tried again. They came out better, but still just a bit darker than I wanted. Dear friend, I then proceeded to pull out two additional skillets and use varying amounts of oil to try to get the lumpia to come out just a shade lighter, with very mixed results. I decided to simply to roll (pun intended) with what I had.

I rolled the warm lumpia in the sugar, cut into one, and enjoyed every bite. No joke. These fantastic little things were just that: fantastic.

They weren’t quite as chock-full of cream cheese and had more pineapple than the in-park version, but those levels can be adjusted in the future as need be.

I have a feeling that if you have a FryDaddy at-home deep fryer in your cabinet, you’ll have it made in the shade. A FryDaddy would ensure that the oil holds its temp and that the lumpia are fried evenly on all sides. I might be adding one to my Christmas list.

And my hubby had the thought that perhaps popping them into the air fryer would work, which is something I think I might want to try in the future.

While they don’t quite look like the picture in Delish Loves Disney, they were indeed delicious.

Whatever adventures await you this weekend, may they be sweet and filled with moments of joy. I’m thankful for you, and I’m so happy that you stopped by to give Saturday Snacks a read. Take good care, friends!

If you’re new to Saturday Snacks, be sure to click here to catch up on all of the hijinks and mayhem that have ensued thus far.

Ready to try Disney’s Animal Kingdom’s Pongu Lumpia? The recipe is below: