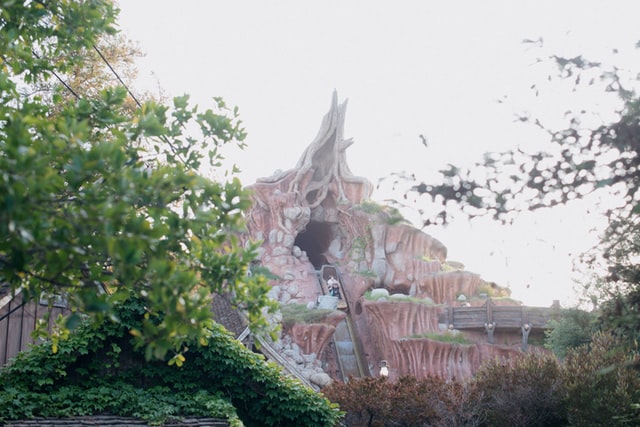 For those of us who spent our formative years visiting Disney parks, the age-old Zip-a-dee-doo-dah theme synonymous with the Splash Mountain attraction likely holds a special place in your heart. Even though I remember the day this attraction opened like it was yesterday, I didn’t know much about how it came to be until I decided that this would be our April feature attraction in A Brief History of Disney. Sure, you might know some of it due to the contentious tie to Song of the South, but the spaces between are a bit of a blur.

In 1983, Imagineer Tony Baxter set out to entice more guests to the then-Bear Country of Disneyland, where only one attraction based on animatronics, Country Bear Jamboree, wasn’t gaining much attention from younger guests. Despite a push from Dick Nunis, a log flume ride for the park was initially discarded, considered to be somewhat beneath the likes of Disneyland due to the typical design for a one-off thrill of getting wet. Enter Baxter’s incorporation of the Briar characters adding that classic Disney backstory that sets their theme park attractions apart from the rest. Baxter and his fellow Imagineers started toying with a concept called Zip-a-Dee River Run, which included scenes from Song of the South.

It wasn’t until then-CEO (1984 – 2005) Michael Eisner’s intervention that the attraction took on the name Splash Mountain, thought to help promote a new film, Splash, with Tom Hanks and Daryl Hannah. A connection that modern-day lovers of this ride would find far-fetched, to say the least. It has been said that in an effort to attract more teens and young adults, Eisner engaged his own to attend the pitch meeting to test the waters among the younger generation. When his son gave it the green light, so did Eisner and the Splash Mountain project was officially in motion.

The Splash Mountain roadmap was unveiled to guests in January of 1987, with Disney execs convinced the tie to a film that was teetering on controversial at the time wouldn’t impact the project negatively due to the limitation to only animated characters from the Song of the South. The focus was redirected from the film’s Uncle Remus to the characters within the stories he told, skirting around the controversial elements that could cause upset.

The Br’er Rabbit, Br’er Fox, and Br’er Bear characters had played a walkaround role in the park for years and fit in well with the theming of Bear Country. Even when the Splash Mountain attraction opened without their more specific Song of the South backstory, they never seemed out of place. The movie never saw another day of direct association with Disney, with former CEO Bob Iger (2005 – 2020) clarifying that he saw no place for it in the modern Disney Company.

Infrastructure for the ride began development in April of the same year, quickly blowing out the budget to become one of Disney’s most expensive projects to date. In 1988, the surrounding area of Disneyland was renamed from Bear Country to Critter Country to fit in more appropriately with the new attraction. After many compromises were made to feed the growing budget required to complete Splash Mountain, including repurposing more than 100 animatronics from the America Sings attraction, the project was finally ready to open in 1989, though even then, not everything went to plan.

The opening of Splash Mountain was delayed on several occasions, pushed back over six months in total while engineers ironed out the kinks in this next-level project. One stumbling block came as test riders became soaked by the splashing water rather than a light, pleasant sprinkling. The solution was a redesign of the boat configuration, reducing capacity from eight riders to seven in order to lighten the overall weight, along with structural changes that altered the underside of the ride vehicle.

The highly anticipated Splash Mountain opened to Disneyland guests on July 17th, 1989 though it wasn’t until later in 1990 that plans were released to install the camera, which captured the reaction of guests as they descended the first section of the ride’s famous drop.

The ride opened to rave reviews and queue wait times skyrocketed as guests came to experience the park’s fourth mountain prompting the announcement of Splash Mountain being introduced to Walt Disney World’s Magic Kingdom and Tokyo Disneyland in Japan. Both parks opened within a day of each other in October of 1992.

In 2020, Disney made headlines with the news that both Disneyland and Walt Disney World Magic Kingdom versions would be receiving a makeover, steering away from the questionable direction of Briar Patch and towards the newer and much-loved film The Princess and the Frog (2009).

The project, said to have begun development in 2019, was met with mixed reviews. Some argued that the Disneyland setting alongside New Orleans Square would be perfect for such a transition, one that would be wildly out of place in Magic Kingdom’s Frontierland, where the east coast Splash Mountain resides. No further developments have come from this announcement, with many questioning if it will go ahead at all.

Aside from a few safety enhancements, a brief Ziploc sponsorship, and strange behavior that became popular with women in the ’90s during the photo section of the drop — you are going to have to look that one up yourselves — not much has changed when it comes to the three installments of the Splash Mountain attraction. It remains to be seen if the reimagineering overhaul announced almost two years ago will still go ahead at either location.

This attraction is an absolute highlight from my younger days, the height of excitement. Let me know your best memories of this ride from the years gone by.