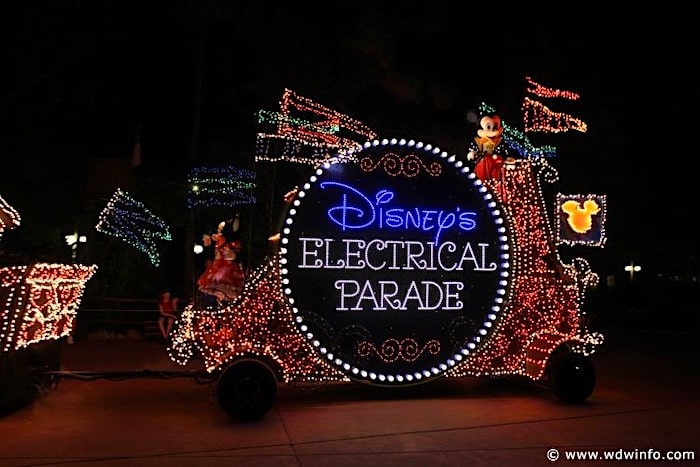 It’s the last Thursday of the month, which means we are meeting up again to take a quick look into the history of an attraction near and dear to our hearts. This time, we are hitting pause on our usual selection of rides and switching gears to something that was recently making headlines in Disneyland. The Main Street Electrical Parade.

To know it is to love it. The Electrical Parade first made its way onto the Main Street of Disneyland in 1972 when two creative minds, Robert Jani and Ron Miziker, took the magic of the classic Disney parade to a new level. The pair envisioned a light-filled story, told through parade floats and live performers, covered in twinkling, colored lights.

A carefully curated soundtrack of classic Disney music was flawlessly synchronized with more than 600,000 LED lights to produce a nighttime spectacular that became a crowd favorite for decades to come. Even so, it wasn’t all smooth sailing.

Just months before the parade was set to debut, Disney discovered that the float manufacturers were running behind and took it upon themselves to finish the work in a backstage area of Disneyland Park. The company took on a wide variety of professional trades and temporary workers to complete the project. Engineers worked tirelessly to coordinate active radio triggers that would activate float-specific music as each entered a new zone, ensuring that all guests had the opportunity to experience the same show from any vantage point along Main Street USA.

The parade’s success quickly attracted crowds, and it wasn’t long before the Electrical Parade experience was recreated in Magic Kingdom, Walt Disney World. Opening in 1977, the East-coast rendition of this twilight spectacular ran until 1991, while the West-coast original first closed to the public in 1996 after a 24-year run. In Disneyland, Imagineers tried their luck at inventing new nighttime experiences, but ultimately, guests were unimpressed. In Magic Kingdom, the parade was replaced by Spectromagic, and the WDW version of the parade was relocated to Disneyland Paris in 1992.

For the next twenty-odd years, refurbished parade floats traveled back and forth between Walt Disney World and Disneyland for limited runs of the famous Electrical Parade, showing for only a few years, or even a couple of months at a time. The parks’ management team uses this Disney tradition as a draw card in both USA parks to celebrate special occasions and events.

While Disneyland Tokyo had its own version of the parade, and Disneyland Paris used many of the floats from the Florida park version, floats have been traded and refurbished around the globe in celebration of this beloved attraction.

One of the most interesting facts I learned while researching this attraction was that in 1997, Disney celebrated the opening of its New Amsterdam Theater in New York City with an extraordinary interpretation of the Electrical Parade, dubbed the “Hercules Electrical Parade” in honor of the new Hercules film. The Disney powers that be had arranged for all the lights of Broadway to be all switched off, spanning roughly eight blocks up to the theater. Miraculously, almost all the businesses complied with the request, with the exception of market competitor Warner Brothers notably refusing. Can you imagine eight blocks of Broadway going dark for this event? Incredible!

As a kid, I remember this parade as the highlight of our trips. Watching the floats illuminating a beautiful glow while gliding effortlessly down Main Street USA is one of my first memories of Disney magic. The street lights go down, and the twinkling begins.

What are your first memories of this Disney staple?