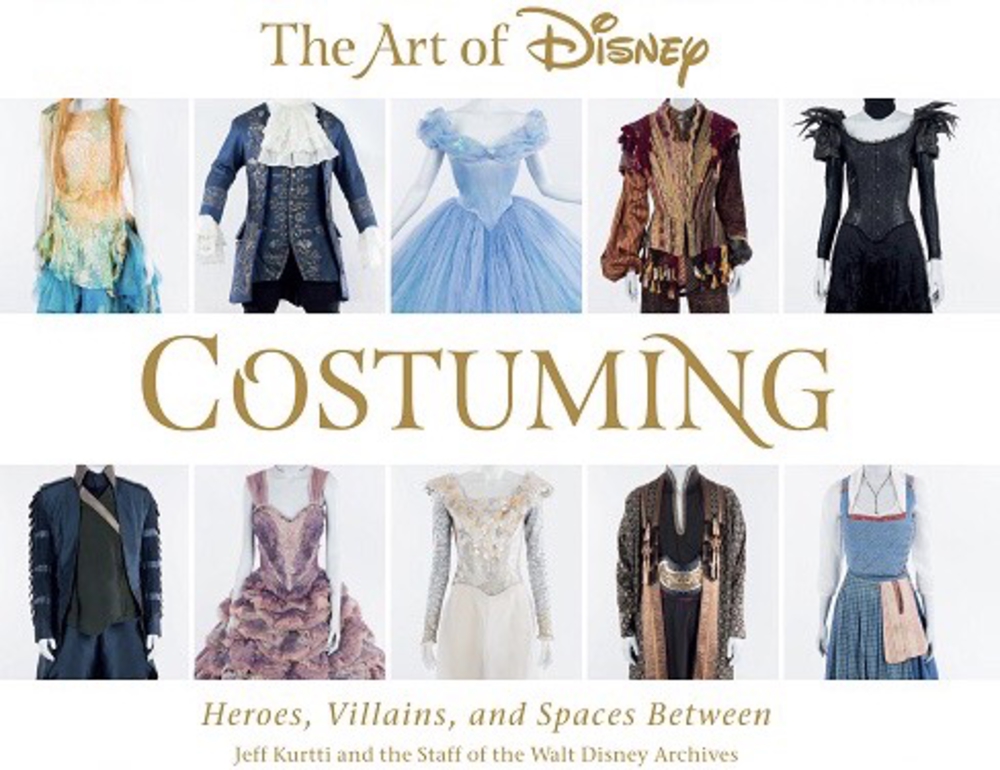 Whatever form of entertainment someone experiences – film, television, theme parks, etc., people are usually interested in hearing about the actors, directors, singers or creators (in the case of theme parks, etc). In many instances, other professions, like costumers, are overlooked.

“Our job is often confused with diminutive stuff like shopping,” said Oscar-nominated costume designer Deborah Nadoolman Landis. What most people don’t realize is – according to costume designer Brianne Gillen – is the “costume design is hugely important for the story. Often, what a character is wearing tells the audience a lot about them before they even say a word of dialogue.”

Costume designers are typically associated with motion pictures and television, but they go far beyond those two categories when it comes to The Walt Disney Company.

Now, Jeff Kurtti, a leading authority on The Walt Disney Company, is finally giving costume designers the recognition they deserve in a recently released book by Disney Editions, “The Art of Disney Costuming: Heroes, Villains, and Spaces Between.”

In coming up with this book, Kurtti says, “Right after the 2017 D23 Expo, Becky Cline and her team at the Walt Disney Archives, with barely a breath of rest, began to conceive this year’s Archives Exhibit for Expo. Their showcase has become something of a cornerstone of the Expo show floor, and expectation among attendees is always high. They had wanted to do something very specific with costumes for some time, and Jennifer Eastwood, senior editor at Disney Editions, had been in contact and suggested that with the time we had before the Expo, we could create a companion book—something that hadn’t been done before.”

In telling a story, no matter the form, engaging the reader has to do with organizing a narrative that is compelling,” says Kurtti. “To me, there’s nothing more dull than a chronology or procedural book—I like the “why” much better than the “when.”

“Seeking an organizing principle that could be leveraged for both a book and an in-person experience at the exhibit, we looked at all of it like a Disney Parks show: a pre-show that establishes a thesis and acquaints people with what they are going to experience, then a show with some form of narrative arc. Heroes and Villains was an idea Becky came up with right away, but of course we realized that there were characters who straddled both worlds—hence, ‘spaces between.'”

In the prologue, Dressing Disney – Creating a Wardrobe of Wonder, Kurtti sets up the influence and importance of costume designers in various divisions at Disney. Here he includes animation, live action, television, show wardrobes (attractions), and cast member costumes. In each of the sections, Kurtti also includes a spotlight profile of a prominent designer who had a profound impact within the Walt Disney Company.

Animation may seem like an unusual area to have a costume designer, but it really is not. “Although a professional costume designer was not a part of the animation creative team,” writes Kurtti, “Costumes based upon the finalized overall character designs were created and worn by live-action models, whose movements were filmed for the animators to study and refer to.”

According to Kurtti, up until 1954, The Walt Disney Company had no need for a formal wardrobe department, but utilized what other studios and rental companies had in stock. The following year, Disney’s wardrobe department was established by Chuck Keehne.

Television was still relatively new in the 1950s and many Hollywood studios resisted venturing into this new medium as they saw it as a threat to the motion picture business. Not Walt Disney. He saw it as an advantage to the company, but mostly as a means to an end – the building of Disneyland. “The Mickey Mouse Club” was the catalyst for Keehne in setting up the wardrobe department.

One area that most people wouldn’t think would need a costume designer is attractions in each of the Disney parks. When Disneyland opened, there was not a big need for costumes. However, all that changed with the 1964-65 New York World’s Fair. Alice Davis, who was the wife of Disney animator and Imagineer Marc Davis, was hired to costume all of the dolls for Pepsi-Cola’s attraction, “it’s a small world.” Not only did she create the costumes for this attraction, as well as other projects, but she also created the process for it. “She established the policy of having duplicate costumes in reserve for each of the ‘performers’ so efficient and rapid replacement was possible,” writes Kurtti. “She also instituted documentation of design elements and fabric swatches for each costume to make repair, replacement, and redesign more efficient.”

“Costuming A Cast” explains why those who work in the Disney parks are called cast members and why what they wear are not uniforms, but costumes. Visitors may not realize that what each of the cast members including face characters like Cinderella, Snow White, as well as Mickey, Donald, Goofy and others are wearing, but they have costumes that are designed specifically to convey their role within the park.

All of this information comes in the first twelve pages of the book, and that’s even before the actual book begins!

Kurtti starts the main section of the book with a case study – A Royal Ball. Here he focuses on Cinderella. “Cinderella is one of the oldest, most widely known and best-loved of all fairy tales,” wrote animation historian Charles Solomon. Disney has represented Cinderella in various forms – animation, film, and television. In the 1950 animated feature, the scene where the Fairy Godmother transforms Cinderella from her everyday clothes into her ball gown was Walt Disney’s favorite animated scene.

Kurtti compares and discusses how animators and costume designers each approached dressing Cinderella. Marc Davis had a big influence on the 1950 Cinderella. “…it’s Marc Davis in his prime.” In 1997, a television version of Cinderella was made, but based on the Rodger & Hammerstein musical by the same name. Brandy slipped into the iconic blue dress in this version. Ellen Miroinick, costume designer, said, “I remember when she came in and tried it on for the first time … It was just a magic moment.”

In 2014, Disney produced a film version of Stephen Sondheim & James Lapin’s Broadway musical Into The Woods. Costume designer, Colleen Atwood, did not want Cinderella to have a blue gown as in the past. In this version, she’s in gold. “I put the blue on the Prince instead,” she said. “And [I] let Cinderella be more like her mother, the Willow Tree, so I used willow colors.” The 2015 film version, this time based on the 1950 animated feature, went back to the iconic blue gown. “She watched the animated film before starting her own designs,” writes Kurtti. “She admits that once she started designing she noticed definite similarities, which actually helped balance iconography with originality.” When Disney aired “Once Upon A Time” on ABC television, naturally, Cinderella would have to make an appearance. Eduardo Castro was tasked with creating the blue gown for actress Jessy Schram.

It’s not until page 42 that we get to Part I of the book. Dwelling In Darkness covers some of the best of the Disney Villains. In Part II, Spaces Between, Kurtti explores the characters who straddle the line between good and evil. Good is represented in the third and final part, Living In The Light. This is where we find details about costumes worn by those whom audiences cheer for and fall in love with.

In each of these sections, Kurtti features select costumes from some of Disney’s most iconic characters and films. Each character’s costume includes commentary from those that were involved in each of these films – bringing new insight to these amazing costumes.

Spaces Between discusses Angelina Jolie’s dark and magnificent Maleficent costumes, Dan Stevens’s The Beast from Beauty and the Beast, the famous swashbuckling clothing from Captain Jack Sparrow and others.

When asked if there were any costumes that he would have loved to include but didn’t, Kurtti says, “I know we were excited about the prospect of a Simba and Scar from the Broadway version of The Lion King, but in the end, the Broadway production and tour just could not spare an “extra” for our use. Even if we’d gotten a spare, the July power outage in midtown Manhattan caused a huge flood in the wardrobe rooms at the Minskoff Theatre, which drenched many of the costumes worn by the principal cast members—I’m guessing our “loan” would have been “recalled” rather quickly.”

I loved this book for a number of reasons. First, it’s a beautiful oversized coffee table book that Disney fans can look at again and again. Second, the book is filled with lots of details and information covering a wide range of Disney films and television shows. And finally, there are the gorgeous sketches and page-sized color photographs of costumes that would normally not have been seen – with the exception of a D23 Expo or special exhibition.

After reading this book, one wonders why there couldn’t be other books exploring other aspects of movies and television. Kurtti says there are currently a lot of discussions about additional or similar books. “A Disney Production Design book and a Disney Make-Up book would be terrific.”

Summing up his experience in writing this book, Kurtti said, “It was great fun to work on such an ambitious project and to spread my wings in a subject area I’ve barely touched. As a lifelong theatre person, and a consultant to Disney Theatrical for more than two decades, getting into the design and craft of costuming was really satisfying. As a Disney cultural observer, it’s also fun to get people to understand that a creative and historical perception of Disney doesn’t end with Walt’s lifetime. So many of these iconic costumes belong to a whole new generation of Disney fans, and the art and the craftsmanship and the skillful storytelling all deserve attention and celebration.”

“The Art of Disney Costuming: Heroes, Villains, and Spaces Between” not only gives the reader a backstage pass, but also a new appreciation for the movies and television shows (and characters) that they know and love.

The Art of Disney Costuming
Heroes, Villains, and Spaces Between
By Jeff Kurtti
Pages: 174. Disney Editions. $45.00.