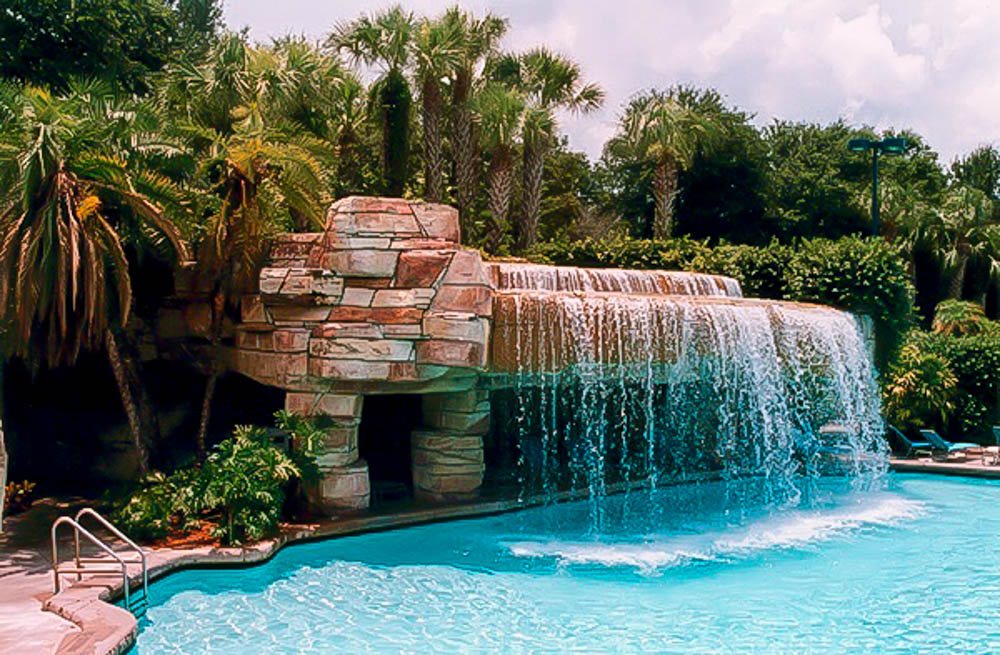 To see the beginning of the story on how the Walt Disney World Swan and Dolphin Hotels‘ unique landscaping came to be, read Part One of this series HERE.

The other thing that Halback and his team played off of was the grotto pool area. They saw the area as a big sinkhole and created elaborate rock work that went around the sinkhole giving it a mysterious grotto experience for guests to visit.

Sandwiched between the two hotels is the grotto pool and beach, a half-acre immersive environment where guests can experience what one would think of when they think of Florida. The grotto was created with faux-rock work that gives guests a more intimate space than the rectangular, Olympic-style pools also at each hotel.

“The grotto experience was different from the two formal pools that each hotel had,” says Halback. “The shape, which Graves originally showed in his site plans, we embellished. At the time, the grotto was a really big deal, but now many of the large resorts have even bigger and more lavish swimming areas.”

Halback said one of things that was fun about the project was to really investigate and create — at that time — some new techniques for dealing with poured concrete. “There is a lot of different patterned hardscape features that are concrete. They are impregnated with different colors that mimic the Tuscan range of colors in each of the hotels. The aggregate we used in the concrete was a variety of different shell materials from very fine coquina shells, which is unique to Florida, to slightly larger shells you would typically find along the beach and even crushed oyster shells. We developed a whole series of pavement treatments around those three things: concrete, integrated color, and shell and we used them repetitiously in a variety of ways throughout the entire project.”

In addition to laying out both hotels and everything inside, Graves also imagined the crescent lake between both resorts. “Although the Yacht and Beach Club Resorts were not yet built, they were always programmed in. The lake was to have a connection to those resorts. These hotels [Swan and Dolphin] were built first, but the other two happened right after them.”

“We designed all the pools, the recreational features, and the water features that went along with each of these hotels, but Graves designed all of the fountains that are connected to the hotel — especially the one in front of the Dolphin at the porte-cochère,” said Halback. “Also the dolphin sculptures on top of the building. It’s really cartoon architecture — bigger than life architecture.”

“One of the things that Mr. Tishman, who was a pretty stern guy, always would warn me about,” said Halback, “would be that ‘young man I am not going to live a long time and I don’t want to have to wait for my landscape to grow in. It better look perfectly mature the day it’s finished or you won’t do another job for me.’ He told me that a number of times on a number of projects.”

They had such a good budget for each of these hotels, Halback said “We — to the best of my knowledge — specified and had planted more large container grown trees than any single project that had ever been done. Almost 90 percent of the trees planted were grown in containers. We planted around fifteen hundred 100 to 300-gallon containerized oak trees, over eight hundred 300-gallon magnolias, over one thousand 100 to 300-gallon crepe myrtles and drake elms, and hosts of date palms and Washingtonian palms. It was exciting because we got to go out and find all of these trees and in essence have contract grown them and collected them. Most of them came from Skinner Wholesale Nursery.” At the time it was the largest container grown tree installation anyone had ever done.

The advantage of container grown trees is that they can be closely monitored, easily manipulated, pruned, watered and fertilized. “It was a bit more production oriented,” said Halback. “You were really able to capture the quality of the plant — in our humble opinion. They also went into the ground easier and, because you didn’t root prune them and dig them out of the fields and then ball and burlap them, they would go into the ground and immediately start growing. You didn’t have that two or three year recovery period. It was pretty phenomenal to be able to plant as many as we did and specify as many as we did. Boy, you go out there now and it’s amazing how that tree canopy has completely knitted itself together. That was exactly what we were trying to accomplish. We were really trying to concentrate on a tree canopy that was commensurate with the size and the scale of these buildings.”

Halback said that the other materials, the shrubs and flowers, were thematic in relation to what they were trying to accomplish. There were lavish gardens and other colorful areas to make it feel “tropical because it’s Disney.”

According to Halback, they picked out plantings depending on the feeling of the area that a guest would be in. “Some were formal in terms of formal gardens and formal annual motifs,” said Halback. “Especially in the entry areas and the guest areas. We spent a lot of money and effort to create the buffers that go around the hotels. Even though visitors would be able to see the hotels from a distance when they turned on to Epcot Resorts Blvd, we wanted to create a sense of anticipation. We created a large berm that runs along the roadway and hides the grotto and the pool area. It also allowed us to build up a buffer and create a roadway experience before you got to the Dolphin Resort. As guests arrive into the Swan Resort they first pass by the convention center and onto a circular porte-cochère area where there is a formal fountain with a formal annual planting display.”

Typical parking lots are large, open, and exposed areas that are subjected to the elements. Halback and his team planted lots of large trees there that created a canopy of foliage. He said that many of the 3,000 container-planted trees were planted in and around the parking lots.

“Turning into the Dolphin Resort, guests drive up a ramp and head straight towards Graves’s big water feature,” said Halback. “Again, we played off the formal arrival with the palms, the buffers of tree canopies on both sides and a lot of earthwork.”

Interestingly, once guests get deeper into the resorts and are looking at the crescent-shaped lake and the big promenade, Halback says the landscaping falls off. In other words, there is not much of it — it becomes simpler.

“Along the water side of the Dolphin you have nothing but tall Washingtonian palms,” said Halback. “The reason why we did this was because we knew we could not cover up any of Graves’s architecture. Nor did we want to. What we really wanted to do was play off the silhouette of the big landscape paint job he has on the side of the building. We didn’t want to compete with it, but accent it.”

Halback and his team incorporated design elements for the swimming pool from what Graves was doing inside the Dolphin Hotel. “The pool had these three little wavy lines stacked on top of each other alongside small stars,” said Halback. “We always called them the bacon and stars motif. I am not sure that Graves would have appreciated me calling it that, but in our office that is what it was known as. We repeated it in a lot of different places and I think it came off as pretty cool.”

The beach, which was on the lakeside, was a nice amenity because “during the winter, you had people coming down from up north who could then stick their feet in the sand and experience what they always associated with Florida.”

Going down the crescent-shaped promenade, Halback repeated the tall Washingtonian palm trees that were planted down the causeway between the two hotels. The causeway, where the boats would come to pick up and drop off guests, continued to play off of the Italian theme.

Halback and his team also did much of the signage in and around the two hotels. “We didn’t want to compete with Michael’s design,” said Halback. “We just picked up the motifs of Michael’s architecture. They were fairly straightforward and we kept them pretty simple. You couldn’t compete with what he was doing, you only wanted to play off of it.”

OUT FROM THE SEA

Graves’s basic concept for the Dolphin hotel “was that it was a tropical island formed by a sudden cataclysmic event. An upheaval by an underwater volcano or earthquake. When the island emerged from under the sea, it lifted dolphins out of the water and these are the dolphins on the room. A mountain struggled to thrust its way upward out of the tropical rain forest. That is the reason for the banana leaves painted along the side of the building…” Halback said that Graves also shared this story with him and his team.

“Again, that’s the idea behind the grotto areas, bigger-than-life kinds of things, the fountains, the spitting dolphins and swans,” said Halback. “We tried to reinterpret it for Central Florida. Don’t get me wrong, when I say that the inspiration came from classical Italian architecture and Hadrian’s Villa that was just the starting place. Graves already had that whole backstory which was a big part of what he wanted to have. We did so much research and testing of what Graves had envisioned for the two resorts and I think we stayed true to what he [Graves] was looking for.”

Walking around the Swan and Dolphin Resorts one can only wonder, did all of this come from Graves’s imagination or did it really come up and out from the sea?