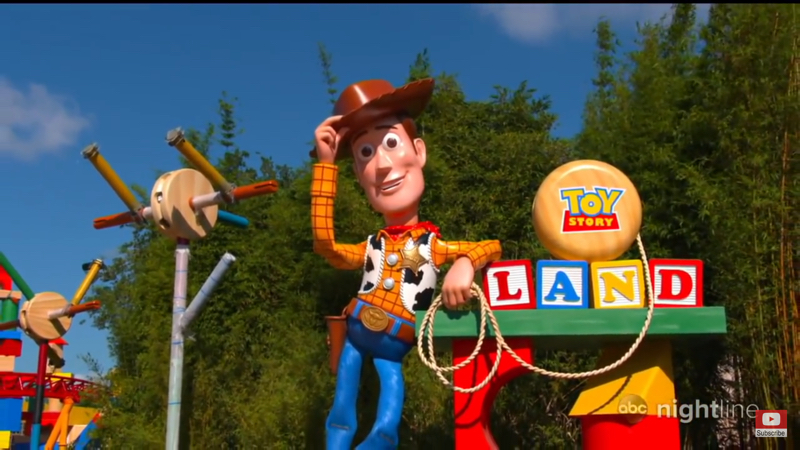 On May 2, several different programs on ABC featured scenes from the upcoming Toy Story Land. Late last night on Nightline, viewers were treated to some vantage points that haven’t been seen by the public as of yet, so we thought we’d share them here with you.

To start off the segment, ABC’s Paula Ferris took a selfie with Buzz Lightyear and Woody. In this next image, you get an idea of how guests will enter Toy Story Land. You can see that the ground is still dirt in this area, but things are starting to come together. Those Tinker Toys you see in the background hold sound and lighting among other things.

Related: Many Details and Thoughts Behind the Development of Toy Story Land Opening Soon at Hollywood Studios This close-up shot of Wheezy shows the spot-on details we’ve come to expect when Disney brings inanimate objects to life. Jessie’s face is glowing with excitement as she hangs Christmas lights in preparation of “Honorary Toys” (that’s us!) coming to pay a visit. Tim Allen shaking Buzz Lightyear’s hand! Be sure to check out the video below to find out what Allen had to say about his disappointment in Toy Story Land. The ride vehicles on Alien Swirling Saucers are completely adorable, especially because each one appears to have a different expression on their face. Yesterday we shared a few details on the new ‘Sarge and the Green Army Man’ Drum Corps. In the photo below, Sarge has Ferris standing at attention while getting ready to join the interactive boot camp and see if she has what it takes to become an official recruit in Andy’s Backyard! If you look very closely at the Green Army Men, you can see that their costumes have a very important detail that’s featured on nearly every ‘real’ one I’ve ever seen – there are actually a few. Can you guess what it is? Let us know in the comments below. In case you missed Nightline last night, here is a look at the full clip: