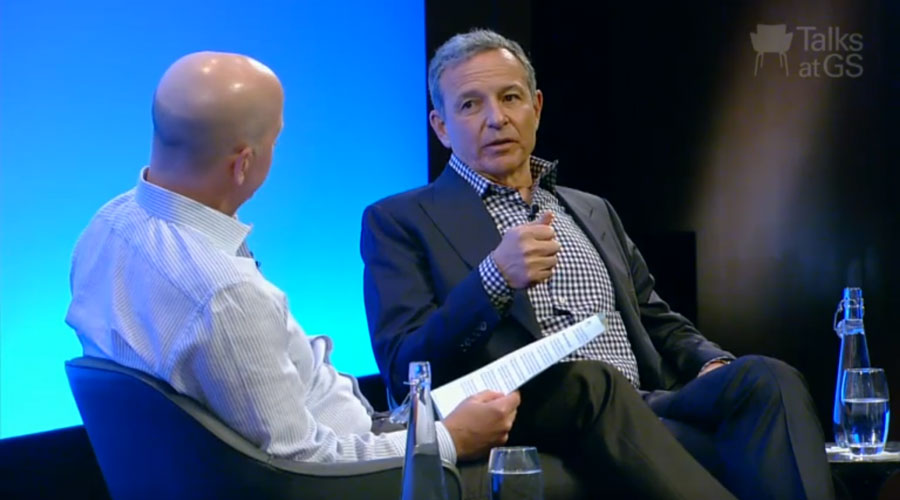 Walt Disney Company chairman and CEO Bob Iger recently took the stage with Goldman Sachs president and co-CEO David Solomon for one of the investment banking firm’s Talks with GS segments, where the two corporate heads discussed Iger’s background, attitude towards the evolution of the Disney brand, and experiences getting the blockbuster film Black Panther made.

The interview begins with some insight into Iger’s scholastic background — a television and radio major at Ithaca College — and where he went from there. Although his sights were set on being a newscaster, the Disney chief’s first job out of college was as a TV weatherman, which he admits to being quite unsuited for. “My presentation was lacking,” he said. After that didn’t work out, Iger made the jump to production at ABC.

“… I’m asked often to reflect on a career that is now 45-years-long, 44 at ABC and Disney, and to many people it seems like a straight line. You started here and you went to here, and it isn’t that way at all. Yes it was straight that I stayed at the same company, but there were many many twists and turns, and most of them somewhat unpredictable in nature. I’m where I am today not really because of a plan, but because of a lot of things…”

Iger’s ABC production job saw him working on soap operas and game shows, and ended with a boss who called him “un-promotable” and gave him two weeks to find another position in the company. Iger did find another job, this time at ABC Sports, where a steady stream of promotions had him work 13 jobs in 13 years. He then proceeding to ABC’s prime-time division in California, where he was responsible for shows ranging from Twin Peaks to America’s Funniest Home Videos, the latter of which he said, “I hope that doesn’t end up in my obituary, y’know. I’d much rather something a little higher brow.”

After four years of that, Iger was raised to president of ABC, which was purchased by Disney in 1995 — from there Iger acted as president of Disney TV, Disney international, COO of Disney in 2000, and then finally CEO in 2005.

““I never knew that I would have this job. I was not one that created a long term plan for myself. There were people who believed that I would get somewhere, but I never quite saw that far into the future. I would say that there were a few things that I learned and what served me well. First of all, nothing beats good hard work. I know that sounds really trite, but I came to my adult life or my career with a modest intellect, but a tremendous work ethic and that served me extremely well.”

Iger spoke a bit about his succession process, and his views on balancing The Walt Disney Co.’s reverence for history with new and innovative ideas.  “Disney,” he said, “still had an abnormal adherence to its legacy, to its heritage, to its past. It was a religion.”

Believing this attitude would get in the way of Disney’s ability to change, evolve, and seize new opportunities, Iger stressed that there were some important aspects of company history that need to carry on and be respected, but not revered.

When expounding upon why he believes the Disney brand has remained so successful for so many years where others have faltered, the CEO explained his company’s ability to stay true to its values while packaging them in a different way.

“We looked at what the core values were of the brand. In Disney’s case, it’s things like, they’re storytelling values but it’s inclusion and universal appeal, it’s good over evil, it’s the value of good work, it’s the value of treating people well, it’s optimism. All of those things. There was no need to in any way really move away from those core brand values, but we had to present them to the world in more relevant ways. And a lot of brands missed that.”

This concept is what lead to Disney’s purchase of Pixar, whose modern storytelling abilities allowed Disney to repackage the same brand values for a more modern audience. Pixar was the first of multiple acquisitions that fit this bill; Marvel and Lucasfilm, which were acquisitions targeted by Iger as far back as 2006, were soon to follow.

The interview closes with a discussion on Marvel’s newest feature, Black Panther, which has managed to outperform expectations at both the domestic and international box offices as well as among fans and critics. Iger elaborated on the creative process that lead to the blockbuster, and his role in it.

“I felt that it was time for Marvel storytelling to much better reflect the world we were doing business in — I’m a big believer in that — whether you call it diversity or inclusion, but the bottom line is that doing so is good for commerce. The world is obviously multi-colored, multi-natured, multi-faceted, the more we infuse that into our stories, the better of we are.”

Iger’s decision to focus on a black super hero generated a certain amount of skepticism in the company regarding whether the film would make money internationally and if it would by profitable for Disney’s consumer products division. Rather than leaving the project open for debate, Iger put forth a mandate that the film would be made. Marvel Studios’ creative team identified Ryan Coogler as a smart choice to direct the film. With Coogler on board, and Ta-Nehisi Coates’ successful interpretation of the character in Marvel Comics, he felt confident enough to give the film a hefty budget.

“The number of people who have, by the way, come up to me and said, ‘Thank you for this. To be able to show a movie to my kids where the characters actually look like my children, it’s a big deal.’ Or that women are as equal to men as they are, that’s great too.”

Iger finished the interview with his usual vagueness about the future. When asked about his plans once his 47-year career at Disney ends in 2021, he stated that he didn’t know. “I don’t have to make that decision now,” he said.