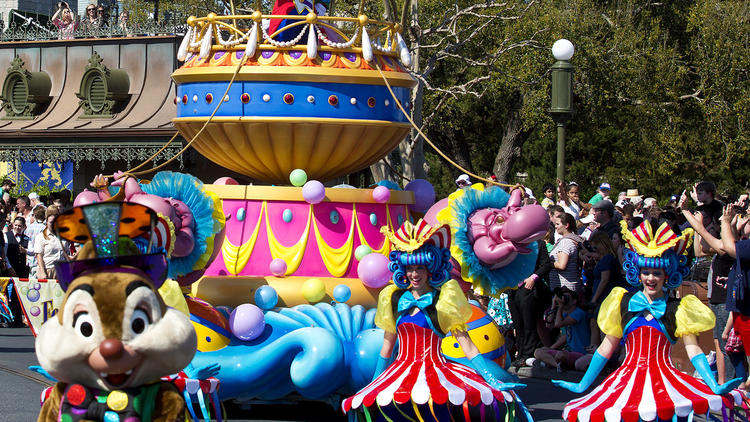 There is currently a debate going on between Walt Disney World and the Teamsters Local 385 Union over which parade performers should be classified as dancers.

Some of the performers specifically mentioned in the debate are the “Cha Cha Bingo Girls” and the “Bubble Girls” in the Festival of Fantasy parade at the Magic Kingdom. These performers wear colorful costumes and make their way down the street alongside Mickey, Minnie, and all the other characters.

The union would like them to officially be classified as dancers, which would entitle them to “mover pay”, a raise of 50 cents per hour. Currently, these women are not recognized as dancing.

Donna-Lynne Dalton, Teamsters business agent, says, “They are doing intricate footwork. They have to be a skilled dancer in order to do this.” Disney, however, says they are doing “stylized walking” and that’s why they’re not eligible for the extra bump in pay.

The Cha Cha Bingo Girls are the performers wearing the blue wigs, red and white striped dresses and the Bubble Girls wear pink wigs and costumes full of balloons. Some examples of performers who are eligible for “mover pay” include the “Swan Court” dancers with the Beauty and the Beast float and the dancers who accompany the finale float in the Main Street Electrical Parade.