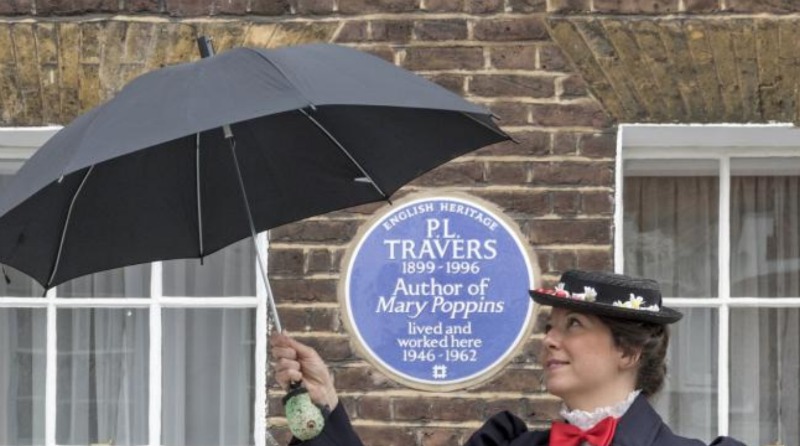 P. L. Travers, the author whose eight Mary Poppins books inspired the 1964 Disney film, has just been honored by English Heritage with a blue plaque that was placed on the outside of her former home which is located at 50 Smith Street in Chelsea, West London. English Heritage has been honoring homes in London with their blue plaque project for 150 years.

Travers lived at this residence that inspired the Banks Family home in the film for 17 years.

Frances Travers, the author’s daughter-in-law, shared some fond memories of P.L. Travers’ time at the residence.

“Mimoo as we called her, lived in Smith Street before any of the Kings Road commercial frenzy had begun.”

“She always wore a soft grey coat that swung from the shoulders, I think it was called a duster coat, and little dresses of many blue and grey checks just to mid-calf underneath.”

“In her little green Ford she was able to be independent and that is how I like to remember her, with Crocus the tortoiseshell cat and Pompey the beloved dachshund!”

“I am so glad that a plaque has been put on this house as memories of those days are so dear to me.”

“That’s when I arrived in London aged about 16, spellbound by the knowledge of what wonderful people had lived in the streets all around.”

“No wonder she loved to live there too!” As many saw in the 2013 film Saving Mr. Banks, which starred Emma Thompson as Travers and Tom Hanks as Walt Disney, Travers had many qualms on how the characters in her books were portrayed in the Disney film.

“We’re pleased to be able to recognize her achievements with a blue plaque on the home where she lived during the negotiations with [Walt] Disney and which was in her mind’s eye when she told him how the Banks’s family home should look.”