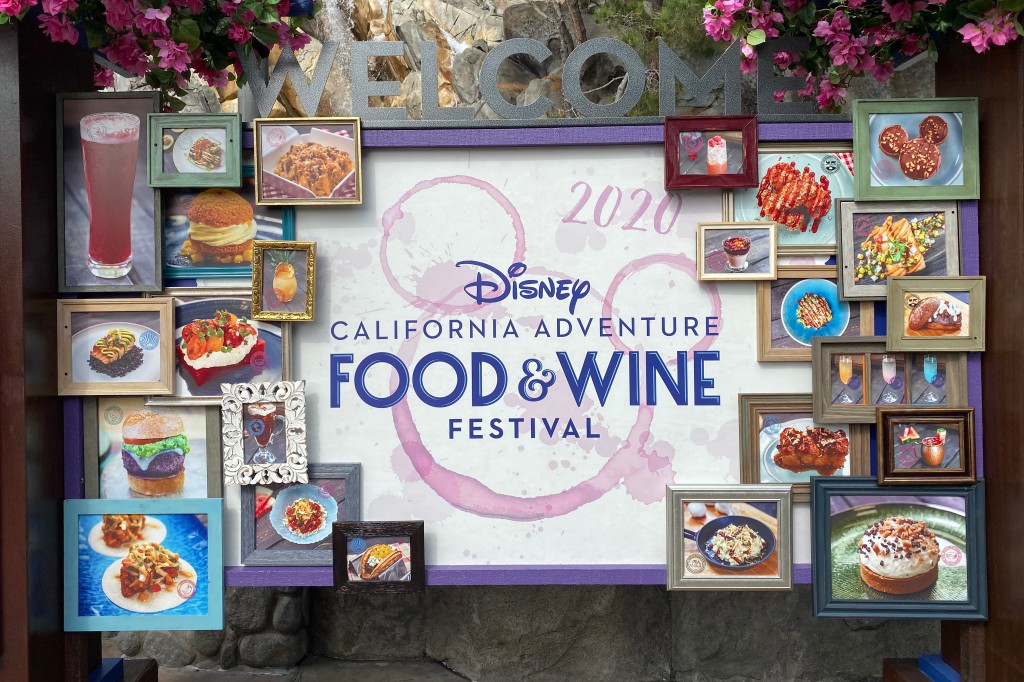 The 2020 edition of the Disney California Adventure Food & Wine Festival kicked off this weekend with its 13 Festival Marketplaces. My good friend Morgan and I were there to check it out and actually got to experience both opening day and a soft opening the day before!

As I said, this year there are 13 Marketplaces, down from 14 last year. The missing Marketplace is because the LA Style kiosk has moved out of Hollywood Land and into the Pacific Wharf/Paradise Gardens Park area with the rest of the Marketplaces. 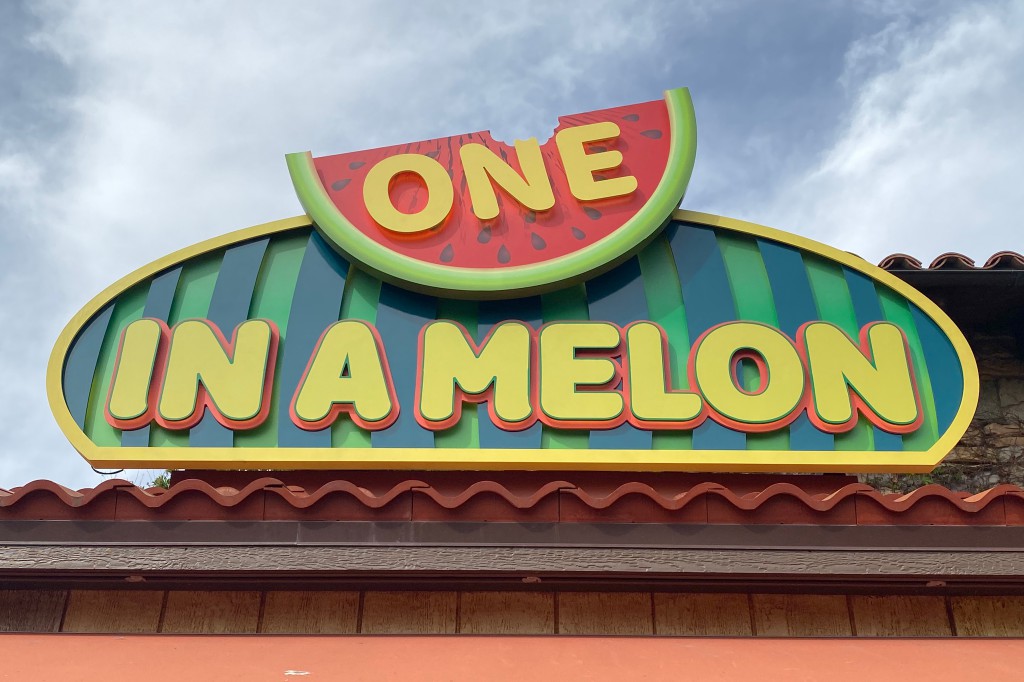 There are 12 returning Marketplaces…gone are Citrus Grove and Veggie Veggie Fruit Fruit…and one new Marketplace, One In A Melon. 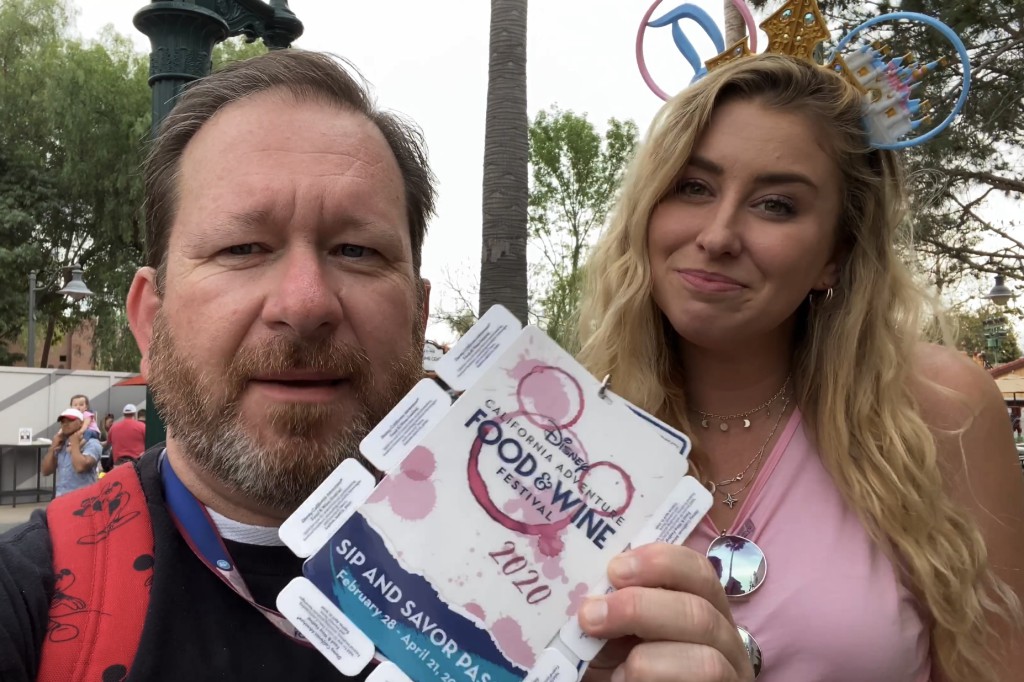 Again this year California Adventure is selling a Sip and Savor Pass that offers eight tastings for one price. The cost this time around is $56 for the general public or $51 for Annual Passholders. Annual Passholders who purchase the Pass also receive a special AP magnet (while supplies last). 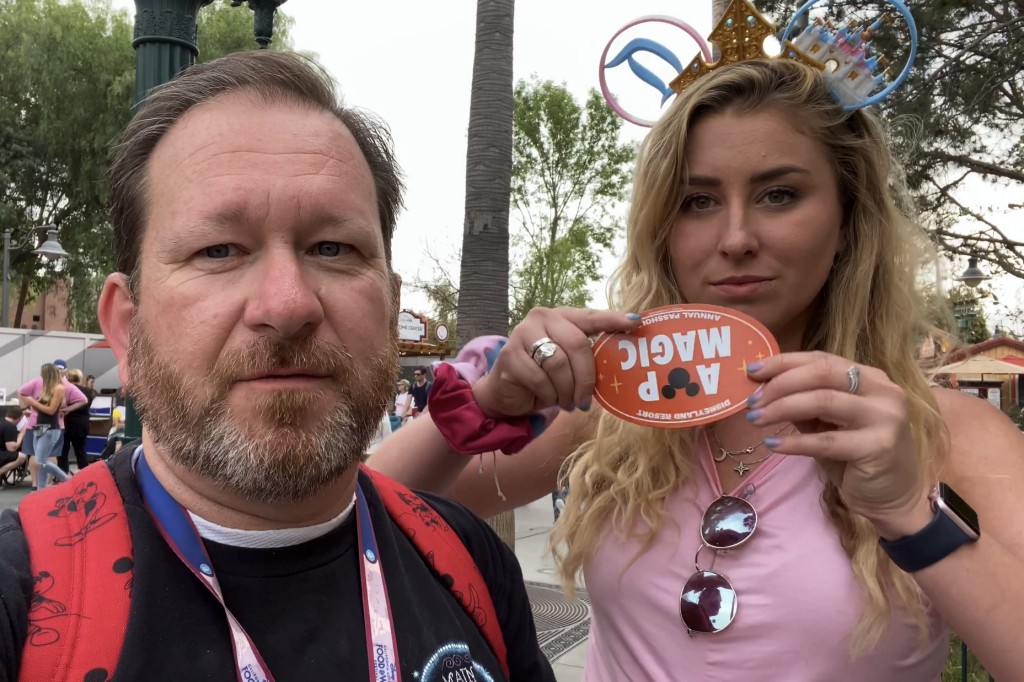 We knew that there was NO WAY we could eat everything at all 13 Festival Marketplaces, so Morgan and I decided to share a Sip & Savor Pass to see how much value we could get out of it. We also tried to stick to items that were new at the Festival this year.

As we began our culinary journey, we didn’t travel far, stopping at the first Marketplace: Nuts About Cheese. These Festivals always have some new and interesting mac & cheese recipes, so when we saw the Impossible Cheeseburger Mac & Cheese [$8.00], we knew we had to try it.

The mac & cheese is mixed with ground Impossible plant-based meat and topped with burger sauce, toasted bread crumbs, and sesame seeds. The bread crumbs, I was told at a media presentation, are even infused with pickle and tomato. 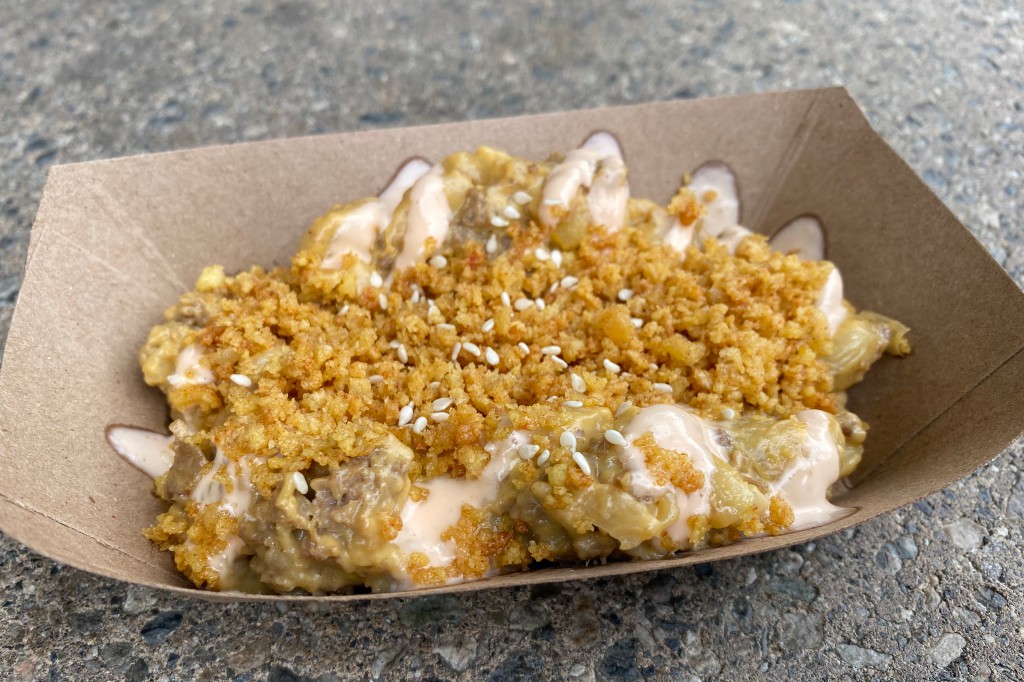 Morgan and I both loved this dish, which we thought had the perfect mix of flavors. I don’t usually enjoy burger sauce, but the tang worked well here, complimenting the cheesy goodness. This was also the perfect vehicle for those who think they won’t like Impossible Meat. Give it a try…trust us.

Next we stopped at the new location for LA Style, which is right across from Wine Country Trattoria. I have never been a fan of the entrees here, but the dessert intrigued me. This year they were serving Monkey Bread [$6.00], which was soaked in butter, cinnamon, and sugar, then baked with caramel sauce and finished with whiskey glaze and candied pecans.

The description sounds way more decadent than the item we were served. 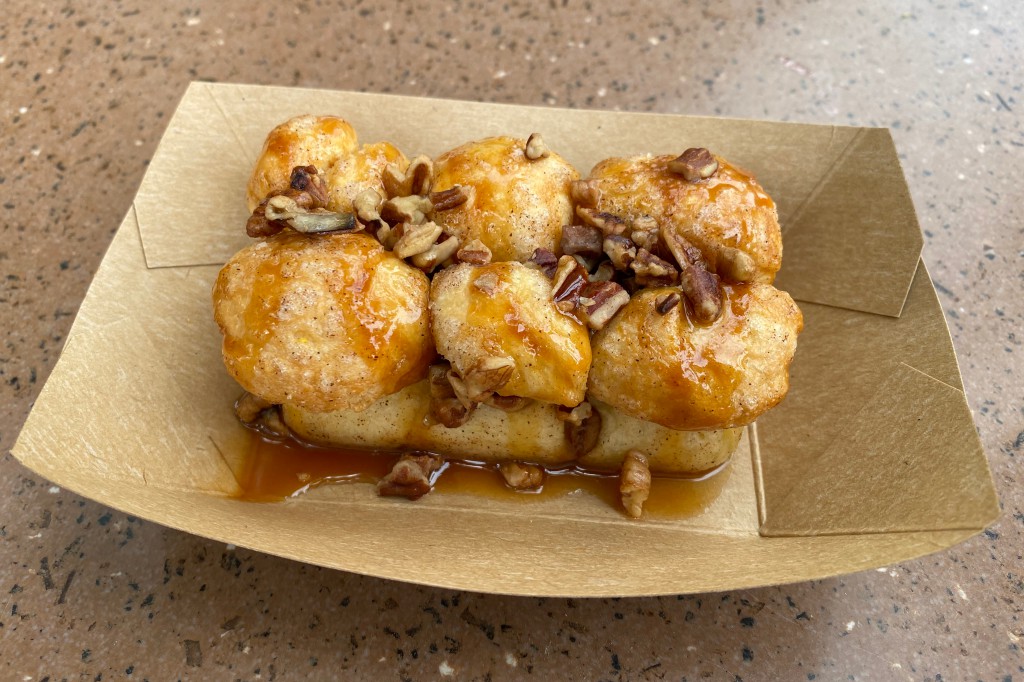 Aside from the slight drizzle of glaze, this dish ended up being very dry. There was really no “caramel sauce” to speak of and the pecans did not seem to be “candied.”

I don’t usually say this about Disney desserts, but we wanted more sweetness from the monkey bread.

We went for something really different with our next choice. Avocado Time is serving Tortilla-crusted Fried Guacamole with Carne Asada [$8.25]. Despite the guacamole name, this is really a few slices of deep-fried avocado, served with a side of carne asada, then topped with pico de gallo and an avocado crema drizzle. 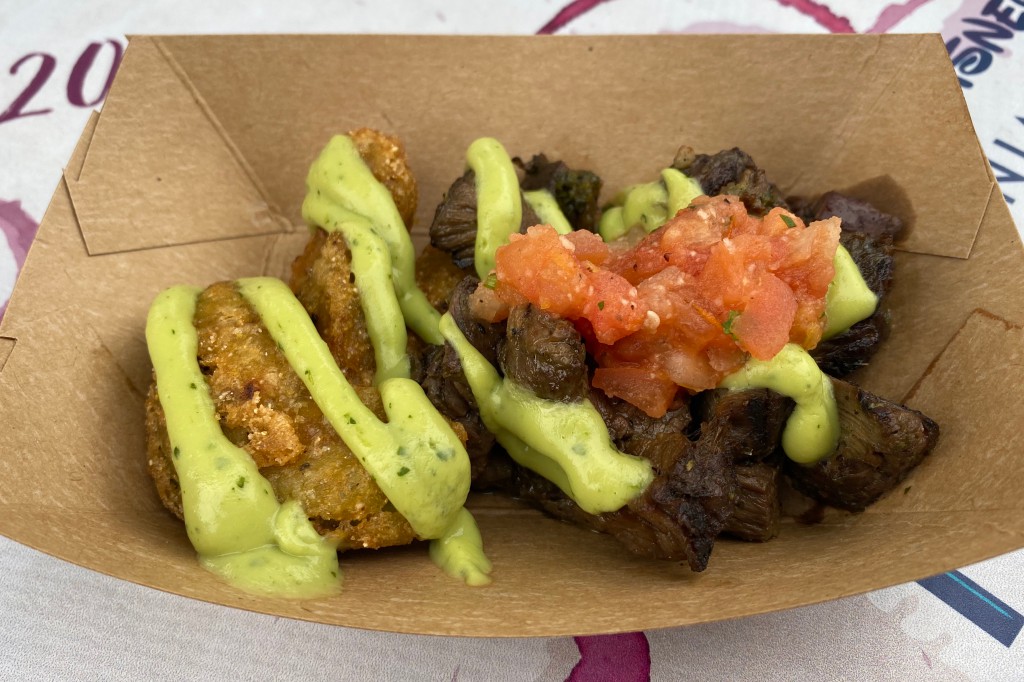 This had some interesting flavors, but Morgan and I are still not sure what to make of it. It’s new and fun, but not great. It had a good mixture of flavors and a little bit of heat…which we couldn’t find the source of. The carne asada was tender and the avocado was crispy, but the pico de gallo did not look fresh. While I don’t think I would get this again, it’s different enough to try once…especially if you’re using a Sip and Savor Pass. 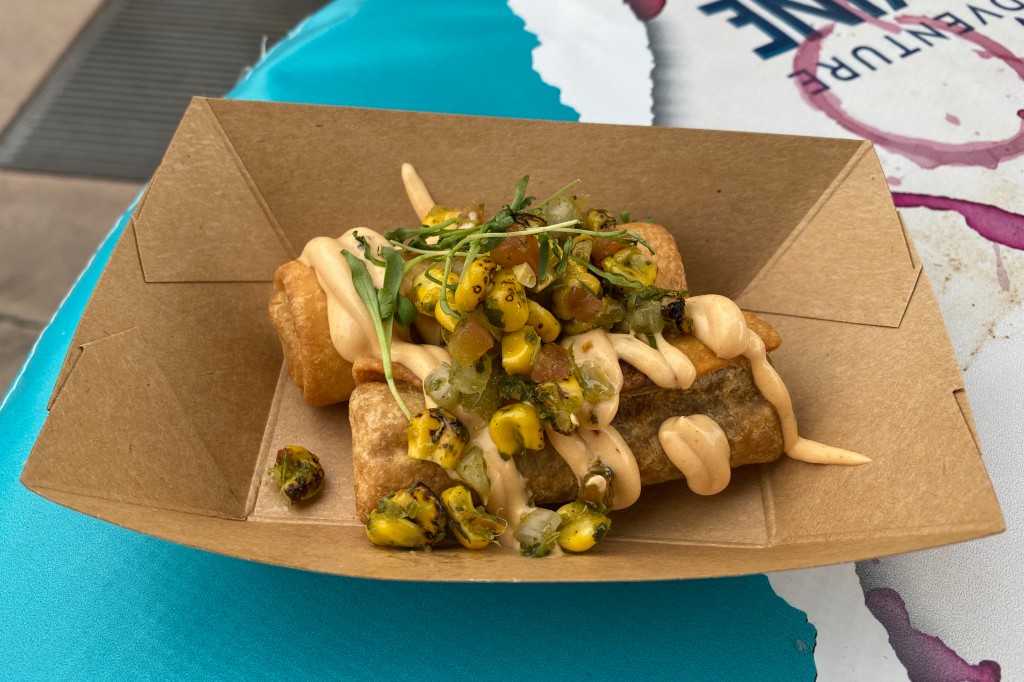 While a great dish to share, Morgan and I thought this item was really bland. The crema was spicy, but unfortunately the chimis were under-seasoned. This is not a bad dish, it just could have been so much better with a pinch of salt.

We had to cut “day zero” short so we could catch a preview of the new Magic Happens parade, so we decided to finish our adventure on the actual opening day of the Festival.

Morgan was running late (we’ll say it was due to southern California traffic), so I was on my own for the first couple of items. Unfortunately, the items I planned on ordering were “temporarily unavailable,” so I had to go with Plan B.

I really like that they offer tasting portions of their Beer Garden menu at Paradise Garden Grill and the brisket items are new, so I figured I would give it a try. 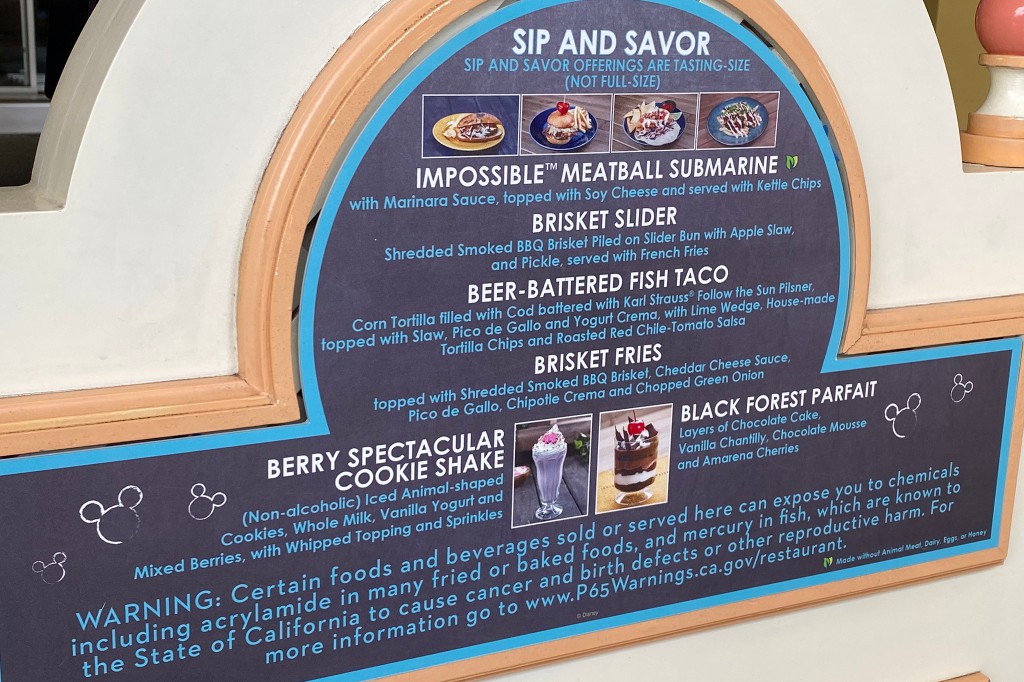 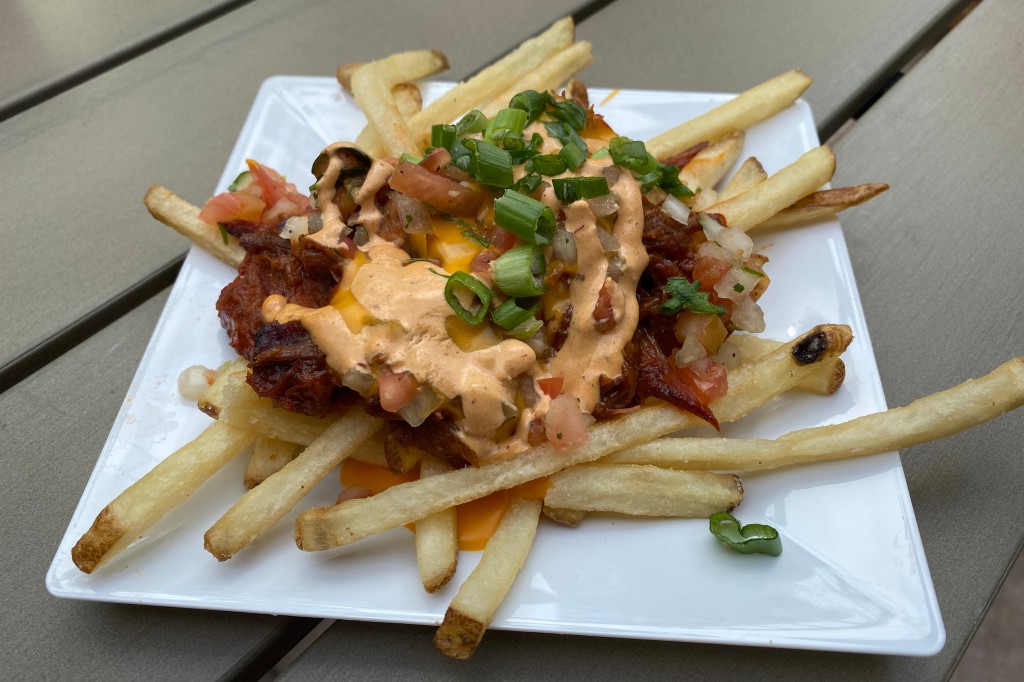 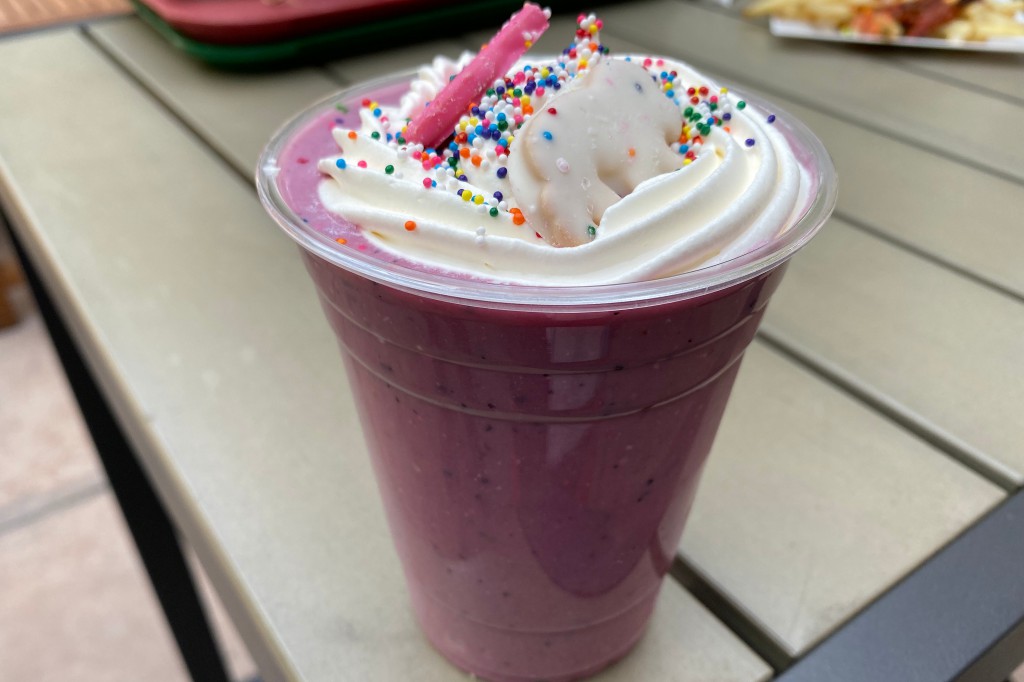 I started with the shake, which I thought was good and not overly sweet. I mean, it was sweet and there’s no way I could’ve finished it all by myself, but I didn’t think it was as sweet as it could’ve been. This is a fun dessert for young (and young at heart) guests.

The fries, however, were a disappointment. First of all, we’re talking about standard limp Disney fries as a base. For a special Festival item, I would’ve expected a little bit of an upgrade there. Second, there were just too many flavors going on here and the BBQ brisket didn’t go with any of them. The brisket was tender and tasty, but it just didn’t pair well with the typically Mexican-inspired flavors of chipotle crema, nacho cheese sauce, and pico de gallo. I think this would’ve worked better if the brisket was not mixed with the BBQ sauce or was switched with a carne asada.

Morgan escaped the traffic and joined me for the Artichoke Toast [$6.50] from I Heart Artichokes. A toasted baguette is topped with artichoke cream cheese, olive and artichoke tapenade, plus a drizzle of olive oil. 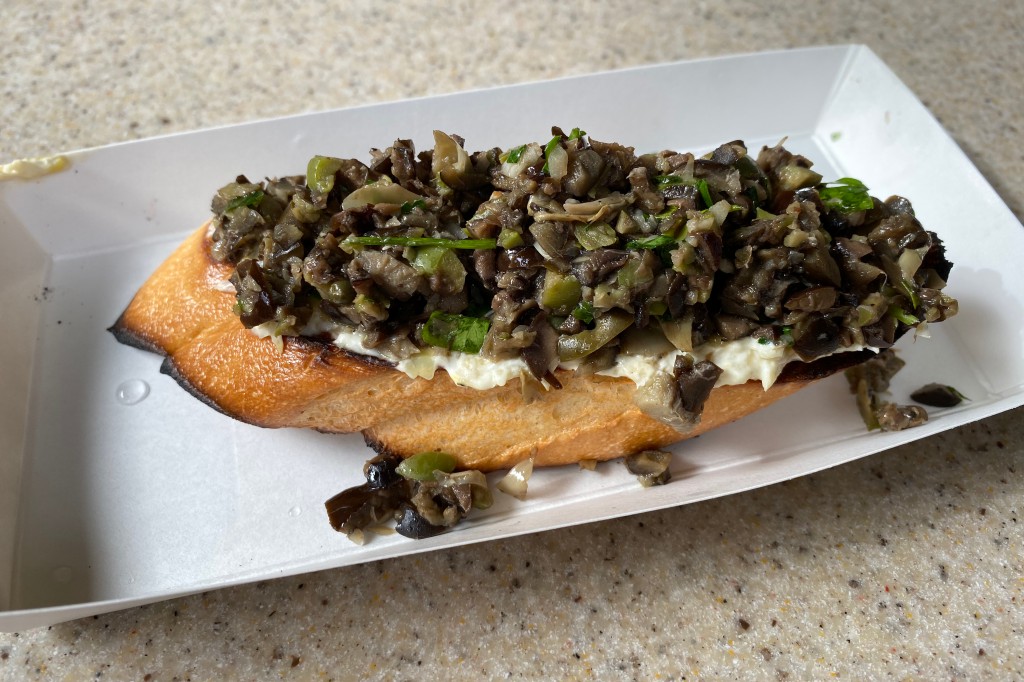 While this wasn’t necessarily bad, there really wasn’t much artichoke flavor to it. If you enjoy olive tapenade however, you would probably enjoy it. We didn’t.

Finally, we returned to the mac & cheese at Garlic Kissed. This version was Carbonara Garlic Mac & Cheese with Nueske’s Bacon [$8.00]. The white cheddar cheese pasta was topped with the bacon, plus fresh parmesan cheese and red pepper panko crumbs. 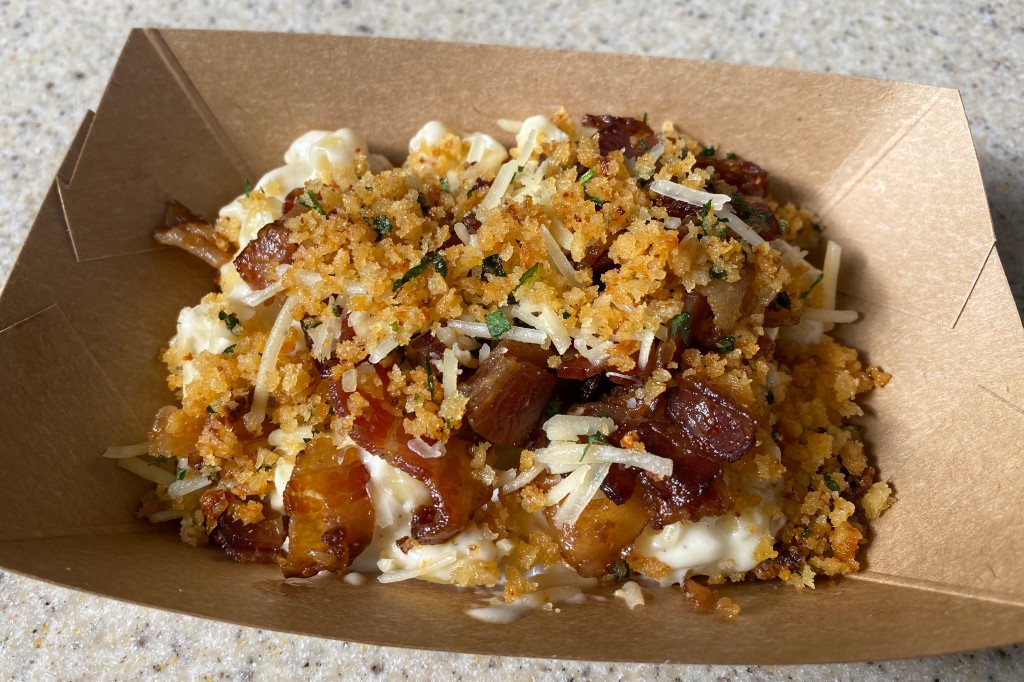 This was a good dish. Really it was. With all of the fancy words and fancy-named bacon, however, we expected this mac & cheese to blow our minds. Maybe our expectations were too high, but this really was just standard Disney mac & cheese topped with bacon. Your kids will probably appreciate this version more than the Impossible version from Nuts About Cheese, but for the more adventurous eaters who are looking to try new things at Food & Wine, this isn’t it.

In the end, we got our value out of the Sip and Savor Pass, but I think we chose our selections poorly because we were focusing on new dishes.

I can’t wait to get back to try the French Onion Grilled Beef Tenderloin Slider and the Brunch Fried Chicken & Waffle Sandwich, or return to past favorites like the  Fried Artichoke with Lemon Aioli and the Shrimp & Braised Corn with Chorizo.