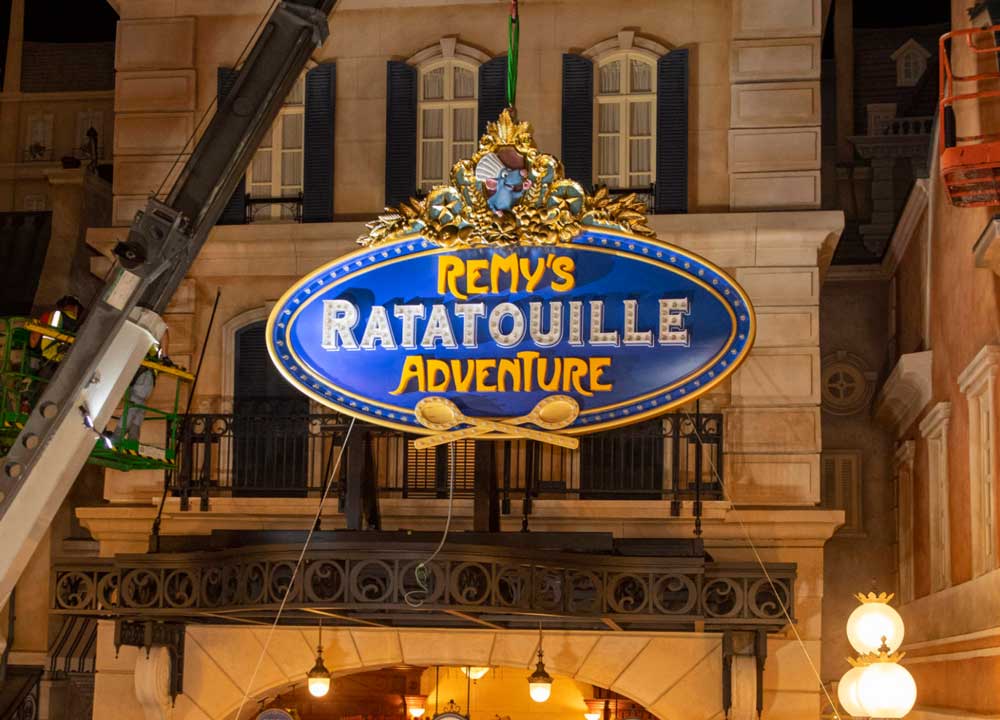 We EPCOT fans received the motherlode of park info and updates yesterday during D23’s virtual event, Fantastic Worlds Celebration. Missed the details? No worries! We’ll begin in this article with what was announced regarding the expansion to the park’s France pavilion, and we’ll get up to speed on the rest of the behind-the-scenes peeks and details in articles to come. Throw on your Remy chef hat and let’s go over the info regarding Remy’s Ratatouille Adventure and its surrounding area.

During the second half of the panel regarding the new expansion to the France pavilion, Imagineer Tom Fitzgerald, along with Pixar’s Harley Jessup and Roger Gould, dug into the design process and subsequent decisions that were made for the aesthetic of the new area.

The space surrounding Remy’s Ratatouille Adventure will represent “Remy’s Paris,” meaning that what guests experience nearest the ride will be the stylized version of the City of Lights found in Ratatouille itself. They created the term “crooked-ology” to describe the design aesthetic found in the area; lines will be slightly askew and everything will be just a bit “off.”

The attraction, which will feature a trackless ride system, will focus on fun for the whole family, and will invite guests to shrink down to the size of the rat for a journey with Remy and his rat family and friends.

Just outside of the attraction, a marketplace canopy structure (pictured above), which was originally desired for the film but was ultimately cut, is brought to life and serves as the portal through which guests will enter the film’s version of Paris.

A news kiosk stands nearby, and La Crêperie de Paris will offer passersby both savory and sweet crepe options.

Tom, Harley, and Roger explained that they feel that the new area is a “mini land” of its very own, and said that hints and acknowledgements of characters and events from the film will be found throughout the expansion, including a wine shop owned by Anton Ego himself.

A fountain, similar to the one featured outside the attraction’s sister ride in Walt Disney Studios Park in Disneyland Paris, stands just on the other side of the marketplace structure. On the fountain, Remy’s friends will be found holding champagne bottles and Little Chef will be the focal point at the top of the fountain.

For more info regarding the attraction’s gorgeous marquee, be sure to check out our article about seeing it for the first time after it had been added to the expansion, as well as Zach Riddley’s behind-the-scenes peek before the sign was installed.