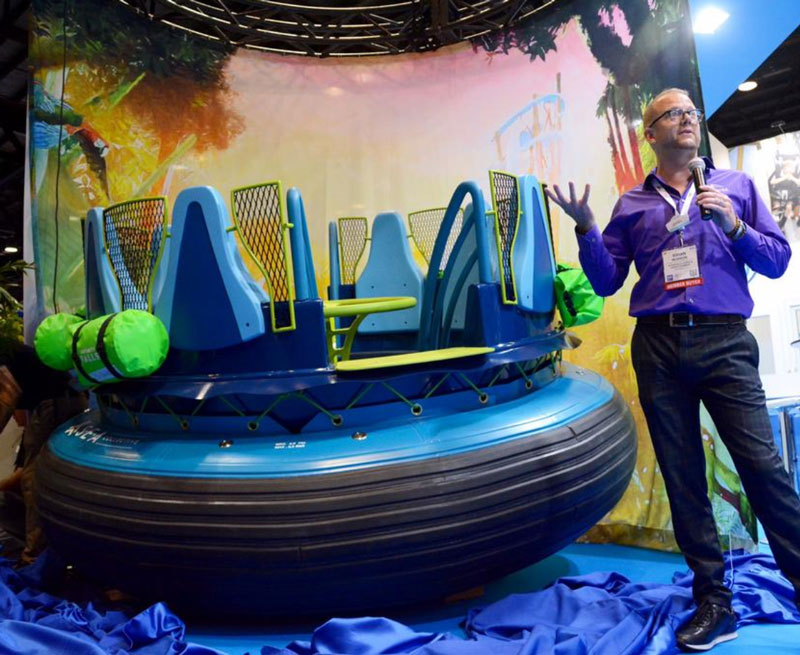 Orlando is currently hosting the International Association of Amusement Parks & Attractions Expo, the tourism industry’s largest trade show in Orlando. The IAAPA Expo runs from November 14th through the 17th and provides companies in the field an opportunity to highlight their technology, ride mechanics, and strategies.

The first bit of news to come out of the expo comes from SeaWorld Entertainment, who brought an example of the rafts that guests can expect when the upcoming attraction Infinity Falls opens.

Infinity Falls will posses the world’s largest river raft drop, 40 feet, and will take guests on an adventure with a team of scientists as they explore the rain forest. Orlando Business Journal spoke with Brian Morrow, SeaWorld’s senior vice president of experience design, who explained how the raft itself was conceived.

“We knew we wanted to build a river raft ride, because from a product category, it’s missing in our park. And we need a family attraction. We chose a very science-forward design with very edgy colors. That was purposefully to show that science isn’t always dirty and rough and old lanterns in wooden boxes. Science is modern. Drones are being used — so in our queue lines, you will see drones being used to study the forest canopy. So we wanted our raft to reflect science’s forward design.”

As part of SeaWorld’s ‘Park to Planet’ initiative, the ride aims to help expand awareness of the environment for guests, and encourage them to bring a pro-conservation perspective into their daily lives. Morrow talked to OBJ about ‘Park to Planet’, saying,

“It’s a fantastic north star for us. I think the power of entertainment can change the way people see the world around them. ‘Park to Planet’ helps them see a way to contribute back to the planet. We can help design how they can see it here and save it at home.”