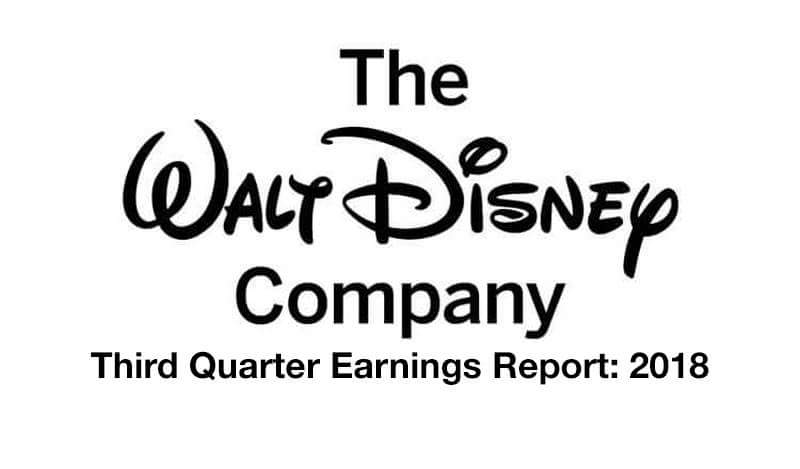 The Walt Disney Company has just released their earnings report for the third fiscal quarter of 2018. This Q3, which ended on June 30th, saw significant growth in diluted earnings per share for the company as well as overall increases in revenues and segment operating income, yet still fell short of Wall Street estimates.

Chairman and CEO Bob Iger said in a statement,

We’re pleased with our results in the quarter, including a double-digit increase in earnings per share, and excited about the opportunities ahead for continued growth. Having earned the overwhelming support of shareholders, we are more enthusiastic about the 21st Century Fox acquisition than ever, and confident in our ability to fully leverage these assets along with our own incredible brands, franchises and businesses to drive significant value across the entire company.

This quarter’s earnings are broken down into the Walt Disney Company’s previous divisions, which were in place before a strategic reorganization in March that divided the company into the Parks, Experiences, and Consumer Products; Direct-to-Consumer and International; Media Networks; and Studio Entertainment divisions. Although already in place, Disney does not expect to begin financial reporting under the new structure until fiscal 2019.

Comparing the first 9 months of 2018 with the same time period last year, revenues rose 7%, operating income grew 4%, and diluted earnings per share increased a total of 50% over 2017.

The losses in operating income were primarily caused by Disney’s investment in BAMTech and lowered equity in the income of investees. Disney obtained a controlling interest in BAMTech — the digital content platform creator responsible for ESPN+ and Disney’s upcoming streaming service —at the end of fiscal 2017. They explain the loss related to it as ” higher content and marketing costs and ongoing investments in their technology platform including costs associated with ESPN+, which was launched in April 2018.”

Disney Cruise Line’s growth was due to “higher passenger cruise days,” which is thanks to the Disney Fantasy being in dry-dock during last year’s Q3.

Both Shanghai Disney Resort and Hong Kong Disneyland Resort contributed to international Parks and Resort growth in operating income. Disney saw attendance increase in Shanghai, although they did suffer from guests spending less on average due to lower ticket prices. Hong Kong’s success was based on “higher occupied room nights, average ticket prices and attendance.”

Studio Entertainment saw major increase across the board. Quarterly revenues increased 20% from last year, leaping from $2.393 billion to $2.878 billion — operating income raised from $639 million to $708 million, an 11% jump.

Success in this division can be explained by comparing the motion picture releases for the third fiscal quarters of both years. 2017 saw the release of Guardians of the Galaxy Vol. 3 and Cars 3, Pirates of the Caribbean: Dead Men Tell No Tales, and the ongoing profits from Beauty and the Beast — 2018 debuted Avengers: Infinity War, Incredibles 2, Solo: A Star Wars Story, and still profited from the ongoing success of Black Panther.

The least successful division by far, Consumer Products dropped 8% for revenues this quarter over last year, from $1.085 billion to $1.001 billion — revenues saw a decrease of 2% for the first nine months of the year, from $3.618 billion down to $3.528 billion.

Announcements and Strategies for the Future