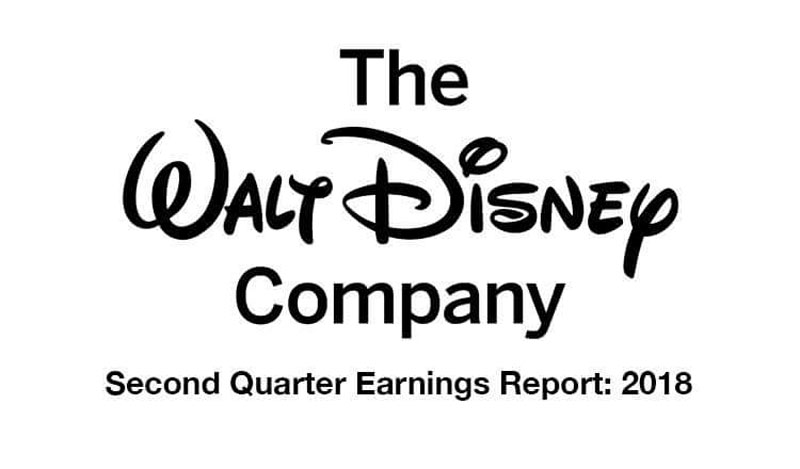 The Walt Disney Company has just released its earnings report for the second fiscal quarter this year, showing growth in both revenue and operating income thanks in a large part to their Parks and Resorts and Studio Entertainment divisions. The company boasted a 9% boost in revenue compared to this quarter last year, and a 6% jump in operating income.

This quarter’s earnings are broken down into the Walt Disney Company’s previous divisions, which were in place before a strategic reorganization in March that divided the company into the Parks, Experiences, and Consumer Products; Direct-to-Consumer and International; Media Networks; and Studio Entertainment divisions. Although already in place, Disney does not expect to begin financial reporting under the new structure until fiscal 2019.

Operating income also jumped from last year’s second quarter, $3.996 billion to $4.237 billion. This is a 6% growth from last years Q2 report, and a 3% growth when comparing first halves of each year.

Here is how each of Disney’s divisions fared individually compared with last year’s second quarter:

For their second fiscal quarter, the Walt Disney Company’s Media Networks division increased from last year’s $5.95 billion to $6.14 billion in revenues; in contrast, segmented operating income dropped from $2.22 billion to $2.08 billion. Comparing the first halves of each year, 2018 saw a growth of 2% in revenues and a loss of 9% in operating income.

The Media Networks division’s success was largely based upon its Cable Networks department, as the changes in the Broadcasting department from quarter to quarter were negligible.

Disney cited their investment in BAMTech, the company developing their streaming services, as an explanation of the Cable Networks’ income loss, as well as once again referencing higher programming costs for ESPN due to complex sporting event pricing.

The stagnation of the Broadcasting department was explained as a number of changing costs which offset each other.

This division saw growth all around, with revenues increasing from $4.3 to $4.88 billion and segment operating income jumping from $750 million to $954 million. Comparing this half of 2018 with the first half of last year, revenues grew by 13% and operating income by 24%.

The Easter holiday helped Disney’s 2nd quarter Parks numbers, as the holiday landed in the third quarter for 2017.

Disney accounts for the success at its domestic parks by referencing “increased guest spending, attendance growth at Walt Disney World Resort and higher sponsorship revenue.” Increases in ticket prices, hotel rooms, food, and merchandise explain the higher guest spending numbers. This was partially offset by costs associated with labor, attractions, and technology spending by the company.

Although their international parks suffered from decreased attendance at Shanghai Disney Resort, as well as “cost inflation and an unfavorable foreign currency impact,” those decreases were outweighed by growth at Disneyland Paris as well as attendance and increased hotel occupancy at Hong Kong Disneyland Resort.

The massive growth in operating income was explained by Disney as “due to increases in theatrical, home entertainment and TV/SVOD distribution results, partially offset by higher film cost impairments.”

While last year’s second quarter had Disney’s Beauty and the Beast to contrast with 2018’s disappointing A Wrinkle in Time, this quarter had the highly successful Black Panther, while 2017 has no counterpart from Marvel Studios.

The Star Wars franchise can be largely thanked for growth in Disney’s home entertainment department. DVD/Blu Ray releases of Thor: Ragnarok and Pixar’s Coco performed better than 2017’s second quarter releases of Doctor Strange and Moana, but the true heavy hitter in the market was Star Wars: The Last Jedi.

Due to “a decrease in comparable retail store sales and an unfavorable foreign currency impact,” higher income from licensing activities was not able to bring this department’s operating income even with last year.

Announcements and Strategies for the Future