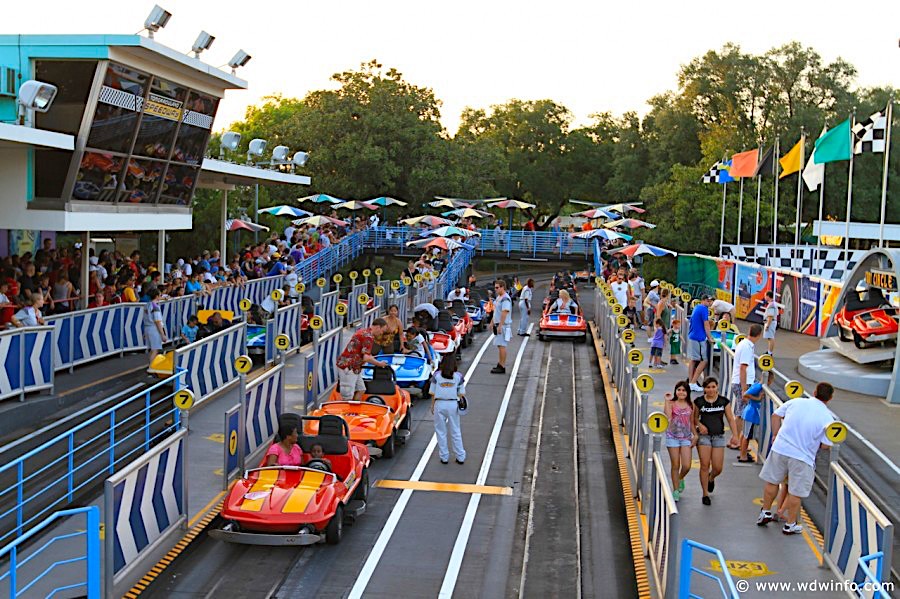 Deep in the heart of Magic Kingdom lies an attraction that many of us remember enjoying as children. It’s one of the few rides left that isn’t attached to any specific Disney movie or character; instead, it has firmly imprinted itself in most of our memories as simply the first time we ever drove a car. It’s the Tomorrowland Speedway, and it is glistening with nostalgia. I can’t wait to dive into its history with you today in this month’s A Brief History of Disney.

The Grand Prix Raceway opened on day one with Magic Kingdom on October 1st, 1971, introduced as Walt Disney World’s answer to Disneyland’s Autopia. The theming varied slightly from its west-coast counterpart, taking inspiration from an international car race track rather than a (once) futuristic theme from the original. Two years later, in 1973, the Grand Prix Raceway was expanded and remained mostly unchanged until 1994.

In the ’90s, the name was changed to the Tomorrowland Indy Speedway after Disney and Indianapolis Motor Speedway joined forces to change the theme of the track to represent some of the better-known features such as The Yard of Bricks, the Scoring Pylon, Gasoline Alley, and others.

Though the track has been adjusted over the years to accommodate neighboring attractions and festivities, the current loop sits at 4/10 of a mile and takes roughly 5 minutes to make your way around. The top speed of each race car is 7.5 miles per hour, and each guest that crosses the finish line receives an official wave of the checkered flag.

The “Indy” was dropped from the name in 2008 when the Indianapolis Motor Speedway ended its attraction sponsorship. The ride itself has remained in its classic racing theme ever since. To make room for the new Dumbo attraction in New Fantasyland’s Storybook Circus, the ride was shortened in 2012. Its most recent alteration rerouted the track again to allow for the long-awaited TRON attraction.

Some guests have been calling for it to be overhauled once more, taking on more of a futuristic theme and marking its place in Tomorrowland with electric cars. I’d love to see this attraction be reimagined into something a bit more fitting of the current climate, but I do hope that when it happens, it isn’t flooded with loosely relevant IP, just for the sake of it.

I’d love to hear about your first memories of this attraction. As a child, this was my first opportunity to feel like I was a grown-up, in control of my own car; too young to realize the track beneath me would prevent any genuine autonomy. As I became a Mum, — yes, that is Aussie for Mom — I watched my children have that same unbridled joy that I knew. Tell me your story below.