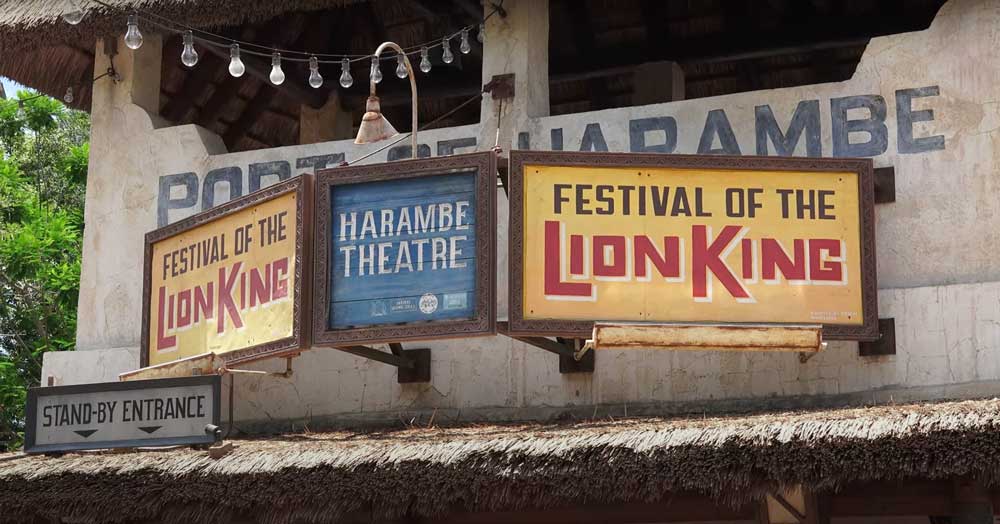 UPDATE: Disney has just announced that they will broadcast a one-time live stream of the first official show at 12:25 p.m. EST on Saturday, May 15th – what we’ve seen so far in the park has been a soft-opening. Tune in to the Disney Parks Blog to watch!

I had the chance to watch the new A Celebration of Festival of the Lion King show at Disney’s Animal Kingdom, and I have some thoughts to share about the new version of the show. As we shared last month, the show has been modified due to the current environment. Onstage and backstage adjustments have been made to allow for physical distancing as well.

I don’t know if I was just so excited to see the show as it has been gone for more than a year or if I love it so much that I overlooked the differences between the new version and the old version at first. Hence, I decided to pull up a video from years ago and give it a watch. I have to be honest; seeing the number of people in that theater made me a little twitchy. Even the actors were packed in during some of the scenes in the old version.

Let’s talk about some of the differences between the new and old versions of this show. At the beginning of the performance, you might remember that the show’s hosts would come onstage and divide the audience members into four sections. Each of the sections would then be assigned an animal like a giraffe or a lion to imitate the sound they make as a form of cheering. This did not happen at all in the new performance. I should also note that the theater only looked to be about 1/3 full, so it felt practically empty. A word of advice is to allow plenty of time in your Animal Kingdom day to wait in line if seeing this show is really important to you. As Craig shared during today’s broadcast of the DIS Unplugged, he waited in line for 90-minutes; there is no virtual queue at this time.

The familiar and beloved music was still part of the show, and although there were fewer performers in many of the scenes, it was still really incredible. The biggest stand out for me as far as missing components were the tumble monkeys. Those monkeys played a huge part in the previous version of the show, and there were a lot of them – at least six or eight, I think. That portion of the show was completely nonexistent.

As you can see in the images below, they still rolled out mobile stages, but they were not the bouncy ones.


The show was still filled with songs and choreography that was beautiful, and they did a great job reworking it in a way that made it really enjoyable.

The next thing that I really missed was the bird dancer who used to fly high above the stage. That was one part of the show that I always looked forward to, and the only thing I can think of that would cause it not to be there is maybe there was a challenge finding actors who could take that on. She still did a gorgeous dance with her partner on stage, but the aerial part of the performance was missing.


In the last portion of the show, the performers would take kids from the audience – who wanted to participate – to the stage area for a little parade around the theater. The kids were given different types of instruments to shake as they paraded around. Unfortunately, that part did not happen at all, and I hope it makes a comeback someday. My kids participated in that parade when they were little and had the very best time. I don’t feel that it took away from the show, although the difference was noticeable.

Have you seen the new version of a celebration of A Celebration of Festival of the Lion King? What did you think of it? Do the differences stand out to you, or are you just happy it’s back? Let me know in the comments below!