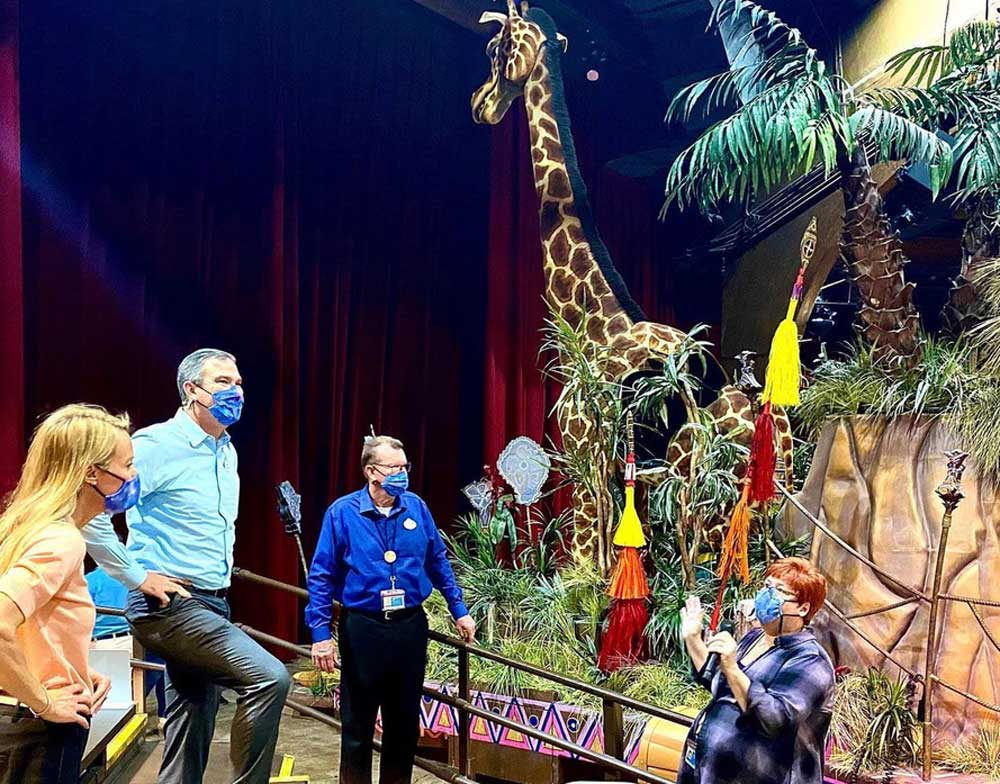 Thanks to an article in the Orlando Sentinel, we learned that Busch Gardens Tampa Bay theme park is bringing back live indoor shows starting in May.

You might remember that Walt Disney World Resort was one of the last of the Orlando theme parks to re-open after its closure in March of 2020 due to Coronavirus pandemic concerns.

With COVID vaccines moving right along now and many folks out there choosing to be vaccinated before going on vacation, it makes sense that indoor shows are starting up again at the theme parks. It seems easy enough for cast members to utilize every other row for seating guests or to space each party 6 feet apart from each other inside the theaters as they are in the queues. The parks still have a face mask requirement in place, and it appears as though that will remain in place for the foreseeable future.

We receive many questions from our readers and viewers about the current occupancy capacity at the Disney theme parks. While Disney has said it remains at 35%, it can feel busier than that in certain spots, and restarting more of their shows would surely take in a lot of those guests.

The move by Busch Gardens makes us wonder if Walt Disney World is feeling the pressure to restart more of their beloved shows and entertainment.

From what we’ve seen during the pandemic so far, Disney doesn’t seem to worry too much about what their competitors are doing regarding reopening and seems to go with their own gut instincts.

Another issue is that Disney’s in-park shows were written and choreographed years and years ago, and now that the world is a different place than it was before COVID, there is no lack of re-writing and re-working to be done. Not only does the audience need to be physically distanced, but the actors and performers do as well. These kinds of changes take time as the integrity of the shows must remain intact.

The extended show closures at the Disney theme parks have also made us wonder if they are having a hard time bringing performing cast members back to work. Obviously, they have to rehire dancers and performers who have been without a job since early last year, so there will be retraining to do, among other things. Some of the cast members may have found new positions by now and may not be available to return to their jobs at Disney.

What could this mean for additional shows returning to Walt Disney World theme parks? Only time will tell, and we sure hope that our favorites will be returning soon. Let us know your thoughts in the comments below.