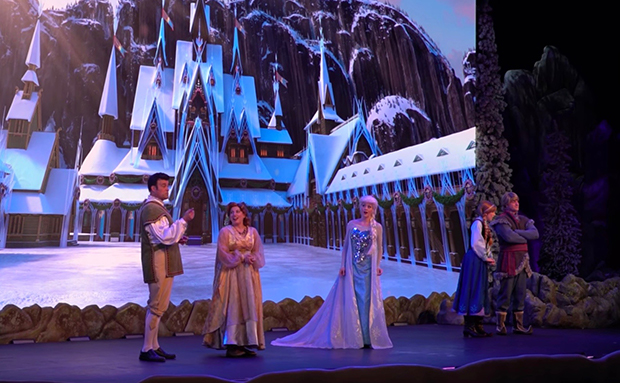 Handicapped Accessibility: Guests may remain in their wheelchairs to experience this attraction. Reflective Captioning is available, check with a cast member at the entrance for assistance.

Overview/History: Guests that love the hit animated film Frozen will love the First Time in Forever: A Frozen Sing-Along Celebration! In the attraction two royal historians of Arendelle retell Anna and Elsa’s story. Audience members are invited to sing along to many of the prominent song from the film’s soundtrack. Of course, the show wouldn’t be complete without appearances from Anna, Elsa, and Kristoff. This show is approximately 30-minutes long.

Showtimes vary by day, so make sure you check the park’s Times Guide for specific details.

First Time in Forever: A Frozen Sing-Along Celebration originally opened in the Premiere Theater, which has since been demolished to make way for Star Wars: Galaxy's Edge. The show moved to its current location the Hyperion Theater on June 17, 2015. The Hyperion Theater is the former location of The American Idol Experience, which closed on August 30, 2014.