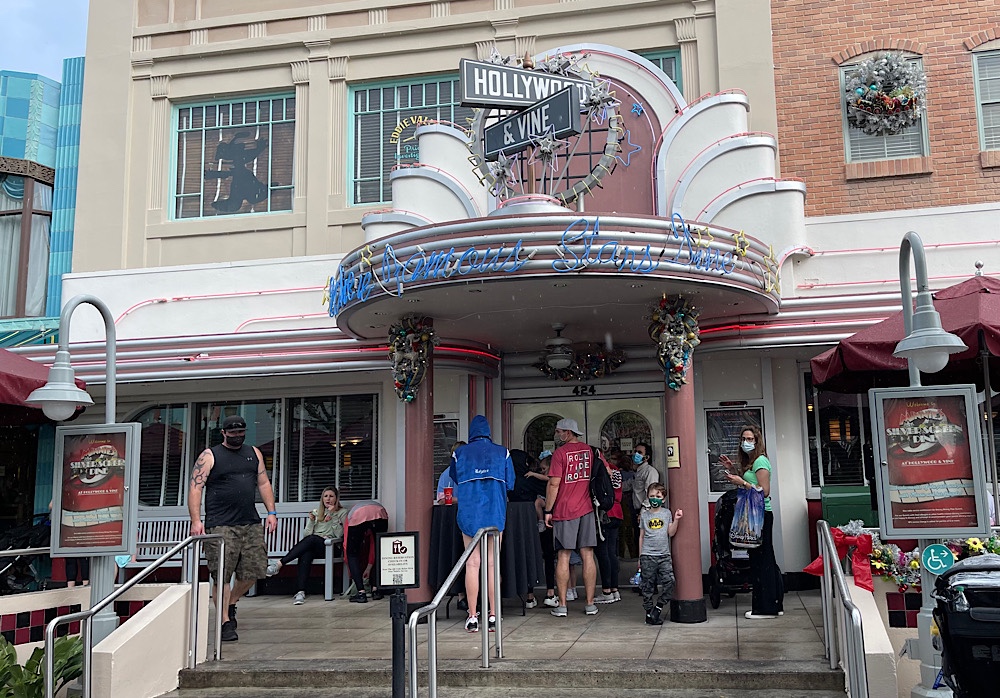 When it comes to character dining at Disney’s Hollywood Studios, Hollywood & Vine is the only game in town – err, park. I had a chance to eat there recently for the first time in ages, and if you’ve got a stop at the Studios coming up soon and you’re considering making a Hollywood & Vine reservation, you might want to read this first.

First of all, let me start off by saying that I enjoy character dining experiences. Yes, there’s that potentially awkward moment where you need to stop eating and turn around in order to be able to interact with the characters, but that’s just part of the deal. It’s also part of the charm. For park guests who highly value character interactions, a character dining experience should be the best of both worlds: delicious Disney food and fantastic moments with Disney characters that you just can’t get anywhere else. I love having the chance to interact with the characters. They are the cutest things, and they are, in large part, what Disney is all about.

Second of all, for years, the team here at the DIS has made our feelings clear about this dining location: it’s roundly disliked. Granted, that was pre-Covid when the subpar food was flowing like a river through the buffet line; I had higher hopes that the food quality aspect of the meal would now be different.

When guests arrive at Hollywood & Vine for Minnie’s Seasonal Dining (it was Minnie’s Silver Screen Dine when I was there), they are given the opportunity to take a group picture in front of a themed backdrop. A cast member will take the picture for you, and it’s a nice little moment if you want to take advantage of having a special pic of your time in the restaurant. And let me take the chance to say that all of the cast members with whom I interacted at Hollywood & Vine (especially our server, Nick) were fantastic.

Once you’re seated at your table, it’s explained to you that your meal (the cost of which is currently $55 for adults and $39 for children) will start with a family-style serving of rolls with honey butter, and a chopped salad. Each guest will then choose an entrée from a list of seven currently available, as well as a dessert.

Right off the bat when researching dinner here at Hollywood & Vine, I was surprised at the marked shift from all-you-care-to-eat to one entrée per person. And, as we have grown accustomed to, there was no vast reduction in the per person price. It’s just such a difference from what it used to be. Granted, the food wasn’t spectacular in years gone by, but at least there was plenty of it.

Let’s take a look at my meal.

Those rolls and butter? Delicious. I’m a sucker for all things carbs and butter, but these were actually quite good and it was an easy answer when our server asked if we would like another round of them.

While the salad was good, the salad dressing was not. The dressing is described as being a Homemade Smokehouse Ranch, but unfortunately, it was just a very watered-down Ranch. The care put into the salad warranted a legit dressing. Again, if I had asked for an additional portion of salad, I believe it would’ve been brought to the table.

My entrée is where things got really good. I almost never order pork loin at a restaurant. Perhaps it’s that it’s not the flashiest choice on a menu; I typically choose a steak or even a chicken or a fish option before I choose pork loin. Friends, I chose the Spice-rubbed Pork Loin at Hollywood & Vine. And I chose wisely.

The pork was moist with a lovely sear on the outside, and was presented atop a generous portion of delicious creamy cheese polenta. The pork loin was topped with Spicy Mustard Barbecue Sauce. I just couldn’t get enough of it. And the whole thing was topped with a Bacon-Peach Chutney. Holy cowabunga, this was good. And there were golden raisins involved, which, in my book, is a good thing.

My dining partners (my sister, and my niece and nephew) weren’t wowed by their entree choices. I’ll hold off on sharing my thoughts on those dishes until I taste them for myself.

I chose the Lemon Cake with Fresh Strawberries for dessert, and what I hoped would be a citrus-lovers’ dream fell flat. I couldn’t detect any lemon flavor, and it ended up being more strawberries and shortcake than anything.

Minnie, Mickey, Pluto and Goofy appear throughout the meal to wave and pose six feet away from your table.

Keep in mind that the theme and character costumes change throughout the year. I loved the costumes that the characters wore the evening that I ate there, and the four friends were more than happy to stay and interact with those seated at the tables.

Guests are asked to remain seated when the characters appear near the tables.

At the end of the meal, servers hand each guest a pre-signed character autograph card, which makes for a nice keepsake. It’s not the same as having the characters sign your autograph book on the spot, but it’ll do.

My experience at Hollywood & Vine was a mixed bag, and to be honest, if I’m wanting to spend $55 per person on a character dining meal and I’ve got a day at EPCOT on the books, I’m going to head to The Land pavilion to eat at Garden Grill.

For the same amount, you’re served what I consider to be an excellent all-you-care-to-eat meal (Chip ‘n’ Dale’s Harvest Feast), you’re able to interact in a distanced fashion with Chip ‘n’ Dale and friends (Mickey in his farmer costume?! Too cute!), and you’re treated to a revolving view of Living with the Land. Our Walt Disney World time and money are too precious to spend on an experience that could be better elsewhere.

How has your experience been at Hollywood & Vine? Please let me know in the comments section below. Which additional character dining locations would you recommend as alternatives?