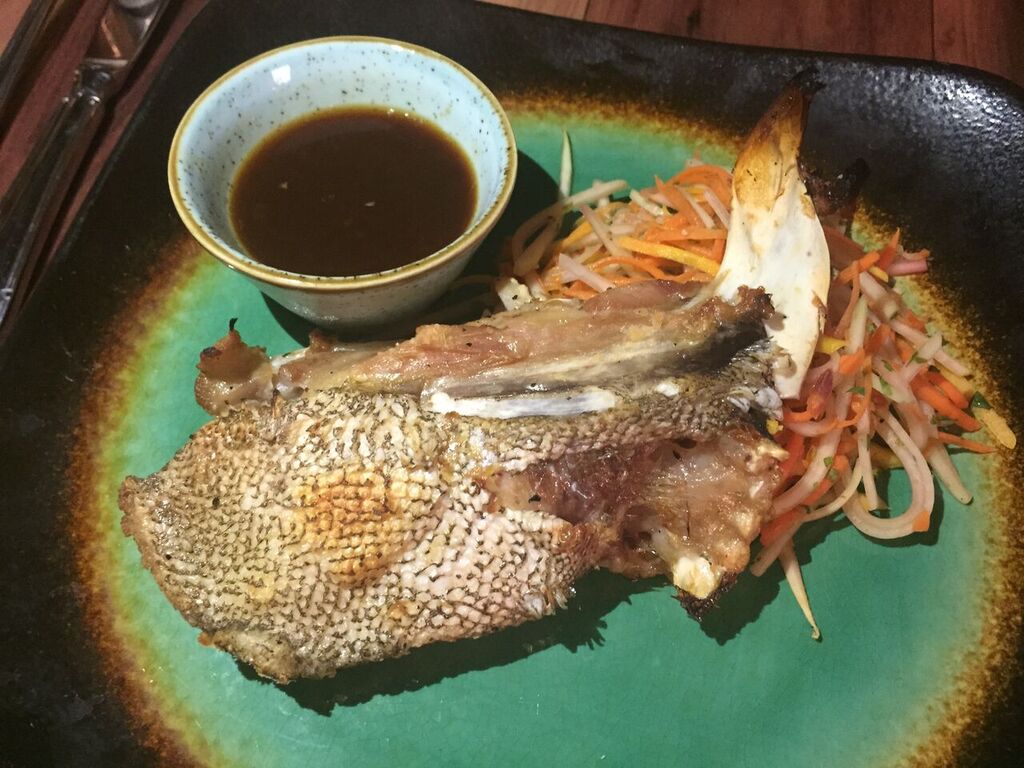 With the soft opening officially over, members of the DIS team visited Skipper Canteen for the official grand opening. Right off the bat I will tell you this is an adventurous menu. It is a very flavorful and unique style of food that the Magic Kingdom has never had before. This is not the type of bland middle America food that most guests will be used to, but for most of the dishes we ate, this uniqueness was a welcome change. The restaurant is comprised of three main rooms: the Mess Hall, the Jungle Room, and the S.E.A. Room. The entire restaurant was themed to be based around the turn of the century. The theming is great in the Jungle Room and the S.E.A. Room. Pictures filled the walls and little details made the room feel immersive. Both of these rooms had an elegance to them that the Mess Hall lacked. The Jungle Room was the family parlor-turned-dining-room of the restaurant’s founding family, the Falls. The details in the Jungle Room feature many of the Fall’s family personal treasures. The S.E.A. Room (or the Society of Explorers and Adventurers Room) is the hidden meeting place of the secret adventurers’ society. The Mess Hall is the largest room, but also the least well-themed. It has tropical colors, which brighten up the large room, but with only a few small details like small African wooden sculptures and it left the team thinking that the Mess Hall needed more details. One positive thing to note about the Mess Hall is that even though it is a fairly large room, I didn’t notice it getting very loud at any point throughout the meal. Our waitress, or should I say our Skipper, was extremely pleasant and full of the familiar, yet different, corny jokes usually found at the Jungle Cruise. The waitress warned us that her jokes would be cheesy, but that the mac and cheese would be cheesier. I won’t ruin all the jokes, but I will say the cast members did a great job tying in restaurant humor in throughout the meal. Being that it is an adventure-themed restaurant, I decided to order an adventurous drink off the menu, which was the Fanta Melon Frosty. According to the menu this is a watermelon flavored soda popular in Thailand, and I thought it was delicious. It was very sweet and I could only have one before I switched to a regular Coca-Cola. Next, the waitress brought out the celebration bread, which was accompanied by a fenugreek seed dip. The dip was very sweet and tasted like a combination of honey and maple syrup. I personally was not a fan and neither was most of the group. The bread itself was fairly standard. If you want bread I would request butter unless you have a very sweet, sweet tooth. This is the first table service restaurant on property that will not accept advance dining reservations. In my opinion the process is very simple and requires a lot less planning then a normal Disney advance dining reservation. All that is required is for one member of your party to give their phone number to a host or hostess in front of the restaurant, and then you will receive a text message with your approximate seating time. For the grand opening we got to the restaurant fairly early at 10:30 am., they took our phone number at 10:45 am., and then we were seated by 11:00 am. With only a 15-minute wait time we waited right outside the restaurant, but if your return time is for an extended period of time you are free to go ride attractions and then return when your seat is ready. This may change over time, but even as we left we noticed that even at peak lunch hours there was no wait to be seated. Additionally, Tables in Wonderland will not be taken at Skipper Canteen. As for the Disney Dining Plan, it is accepted and counts as one table service meal from your plan.

This review is only of the dishes we ordered off the menu. Additional appetizers and entrées are on the menu, and you can check the entire menu out HERE. Created with a secret recipe of chick peas, garlic, onions, lemon juice, and herbs these falafels were fairly good. Nothing extraordinary, but someone who enjoys falafels will not be disappointed. As a smaller appetizer this is a good dish for someone who wants an appetizer, but doesn’t want to be too full for their entrée. This appetizer costs $8.00. Essentially these were dumplings, but they were delicious. Filled with pork, shrimp, mung beans and spices wrapped in gyoza skin, this appetizer was my personal favorite. The filling created an exceptional combination of flavors that I haven’t tasted in a typical dumpling. They are steamed and served fairly hot so be prepared to let them cool off before you bite right into them. This appetizer costs $10.00. This starter tasted fresh, but it did have a potent smell. Accompanying the fish was yurt-soy sauce that went well with the dish. This was probably the largest appetizer and could even be considered an entrée for a very light eater. Because it was fish off the bone it was not a very shareable appetizer. If you like seafood and you don’t fill up easily this is a great appetizer to have. This appetizer costs $11.00. Slow-cooked beef, black beans, tostones, and queso fresco are put together for you to create your own combination of flavors. The beef and the accompaniments were enjoyable, but I personally felt awkward piecing together my own appetizer in a table service restaurant. This appetizer costs $9.50. This was the most controversial dish amongst the group. Some members adamantly did not like it, calling it rancid due to its bitterness and overly spiciness. Yet, other members said they enjoyed that it because it was full of flavor and that they liked the combination of garlic and ginger. This appetizer costs $7.50. The marinated grilled chicken breast had a rich flavor and was juicy and tender. While it was flavorful this is the best dish for guests who don’t like the bold international flavors that many of the other entrées at Skipper Canteen has. Overall this entrée was appetizing, but the biggest downside was the accompanying shiitake fried rice, which was overcooked. This entrée costs $23.00. The marinated grilled pork tenderloin medallions were one of the most popular entrées that was ordered amongst the group. The pork’s flavor was delectable, and and by marinating it, made it very tender. This dish costs $23.00. Grilled Lamb Chops – Seasoned with a North African berber-style spice blend, these lamb chops might have been the worst entrée on the menu. Being overly cooked and very thin made the lamb chops lack flavor and created an awful texture. Additionally, the lamb chops were extremely bony making eating them difficult. The lamb chops were $25.00. This was the entrée that I ordered because typically I love mac and cheese, but I thought the combination of the mac and cheese and the bechamel sauce was awful. The spiced ground beef mixed in with the mac and cheese did make it more substantial of a meal, but overall I did not enjoy this entrée. This entrée costs $19.00.

This dessert was a vanilla chiffon cake soaked with lemon grass-ginger syrup. This dessert was very light, and it is perfect for someone who just had a big meal. I think this was my personal favorite dessert, but I was alone in that opinion. Overall it was tart, but not too tart, and sweet, but not too sweet. The cost of the dessert was $8.00.

This dessert was just average. It was sweet, but not extremely flavorful. The texture was also very odd. It was something that if I had ordered for myself I would have finished, but nothing I would order again. The vanilla chiffon cake with coconut and lime-white chocolate ganache costs $8.00.

This was the favorite dish amongst the entire group, excluding myself. Everyone seemed to enjoy the african-inspired chocolate cake, along with the complementing caramelized banana and cashew-caramel ice cream. This dessert costs $8.00.

This is easily the most adventurous dessert on the menu. It is the Skipper Canteen’s take on a traditional rice pudding. It was a unique dessert that I personally did not enjoy. On top of the dessert what looked like a giant chip or cracker made out of seeds. The dish is comprised of a caramelized custard with millet, almonds, apricot, dates, and honey-almond tuile, and the cost of the dessert was $8.00.